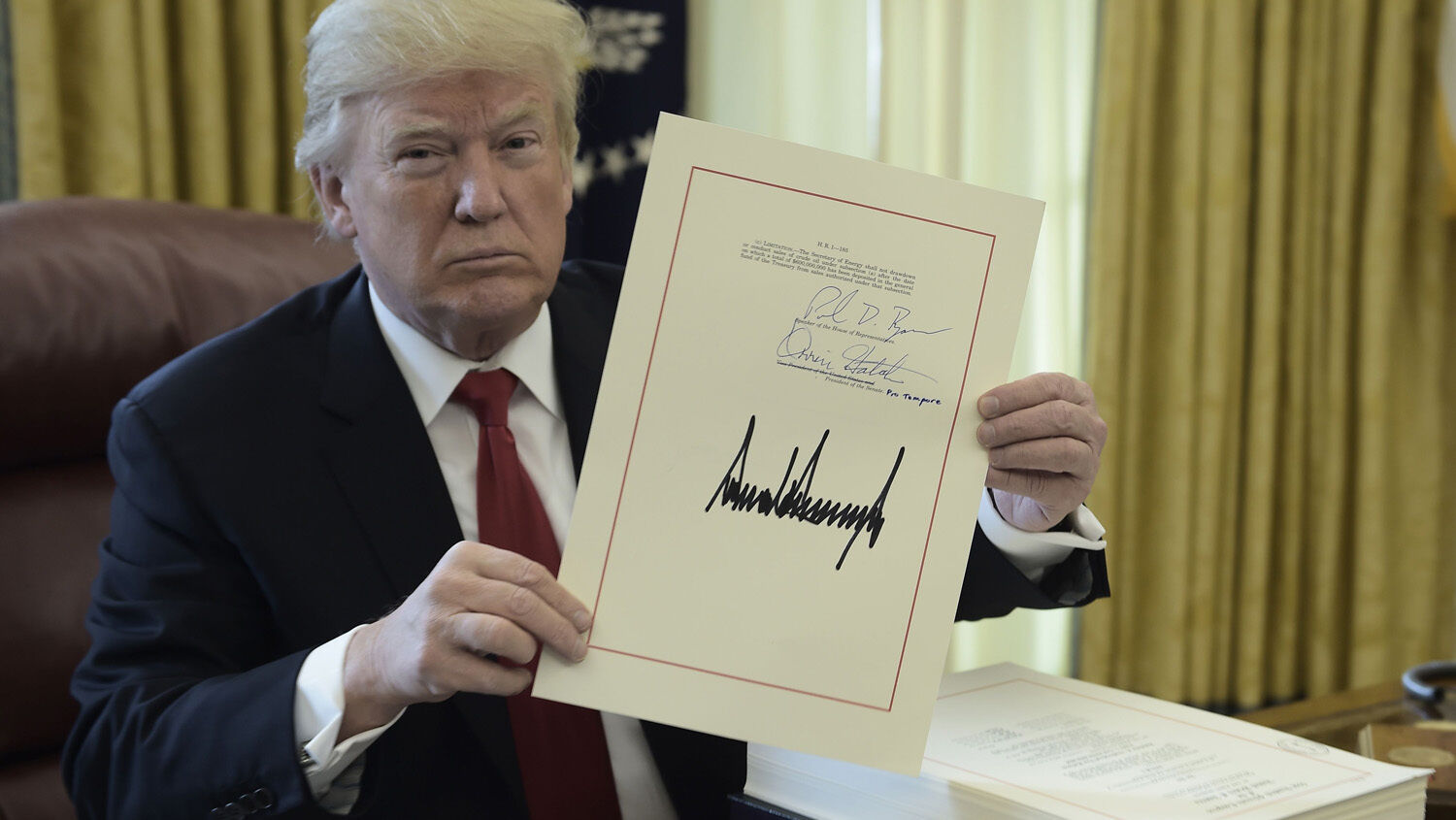 United States President Donald J. Trump holds up a document during an event to sign the Tax Cut and Reform Bill in the Oval Office at The White House in Washington, DC on December 22, 2017.
BRENDAN SMIALOWSKI/AFP/Getty Images

United States President Donald Trump is set to sign a controversial tax reform plan into law. This plan has Europe worried, as Spiegel Online reported on Dec. 8, 2017. It marks the biggest overhaul of U.S. tax policy in decades—and it could lead to an international trade war.

As Spiegel reported, the new tax plan will transform the U.S. from a high-tax country to a low-tax country, making America much more attractive for businesses. To make up for the subsequent revenue shortfall, the plan includes measures to tax imports more heavily. This is why Europe eyes the bill with suspicion. The tax bill embodies President Trump’s protectionist “America first” policy. Germany, in particular, is unhappy about where that leaves it.

Germany and other European nations see the tax bill as an attempt to penalize imports and discourage trade with other countries. Subsidiaries of foreign companies will now have to pay a special tax if they import components from their parent companies, pushing them to do more business in America.

With its economy so dependent on exports, Germany is worried. Germany, France, Britain, Spain and Italy have written a complaint to U.S. Treasury Secretary Steven Mnuchin, warning him that the tax reforms may violate international treaties, including the German-American Treaty of Friendship, which forbids Germany and America from “discriminating” against each other’s companies. America is also a member of the World Trade Organization. The tax reforms may violate its commitments and agreements as a member of that group.

Spiegel Online, a German news source, stated: “The American tax reform is nothing less than the beginning of a new tax race. … Trump’s unilateral actions could prompt a new push towards European unity.” If America starts looking out more for itself than for the international good, Europe will fight back by doing the same—matching an “America first” policy with a “Europe first” policy.

Herbert W. Armstrong warned that economic pressures could lead to a coming trade war. In the March 1971 Plain Truth, he wrote:

“Either we start raising high tariff barriers against other countries, starting a trade war which in time will trigger the nuclear war that would destroy us—or American workers are going to have to meet the competition of the workers in other countries, by lowering living standards. Obviously American workers are not going to choose to do the latter. And if they don’t—well, the handwriting is on our national wall.”

That is exactly what we see happening today. America is raising its tariffs against other countries. This move could lead to the trade war and economic siege that will destroy America economically. President Trump’s tax reform plan is leading toward that siege, although he doesn’t know it yet.

A trade war is fast becoming a dangerous reality. A trade war could well form a major component of the economic crisis that spreads from the U.S. to Europe. It did in the 1920s and ’30s.

To learn more about the prophesied trade war and where it will lead, read Brad Macdonald’s article “Trade Wars Have Begun”.