Conditions are in place for bringing Europe’s strongest economy to its knees. 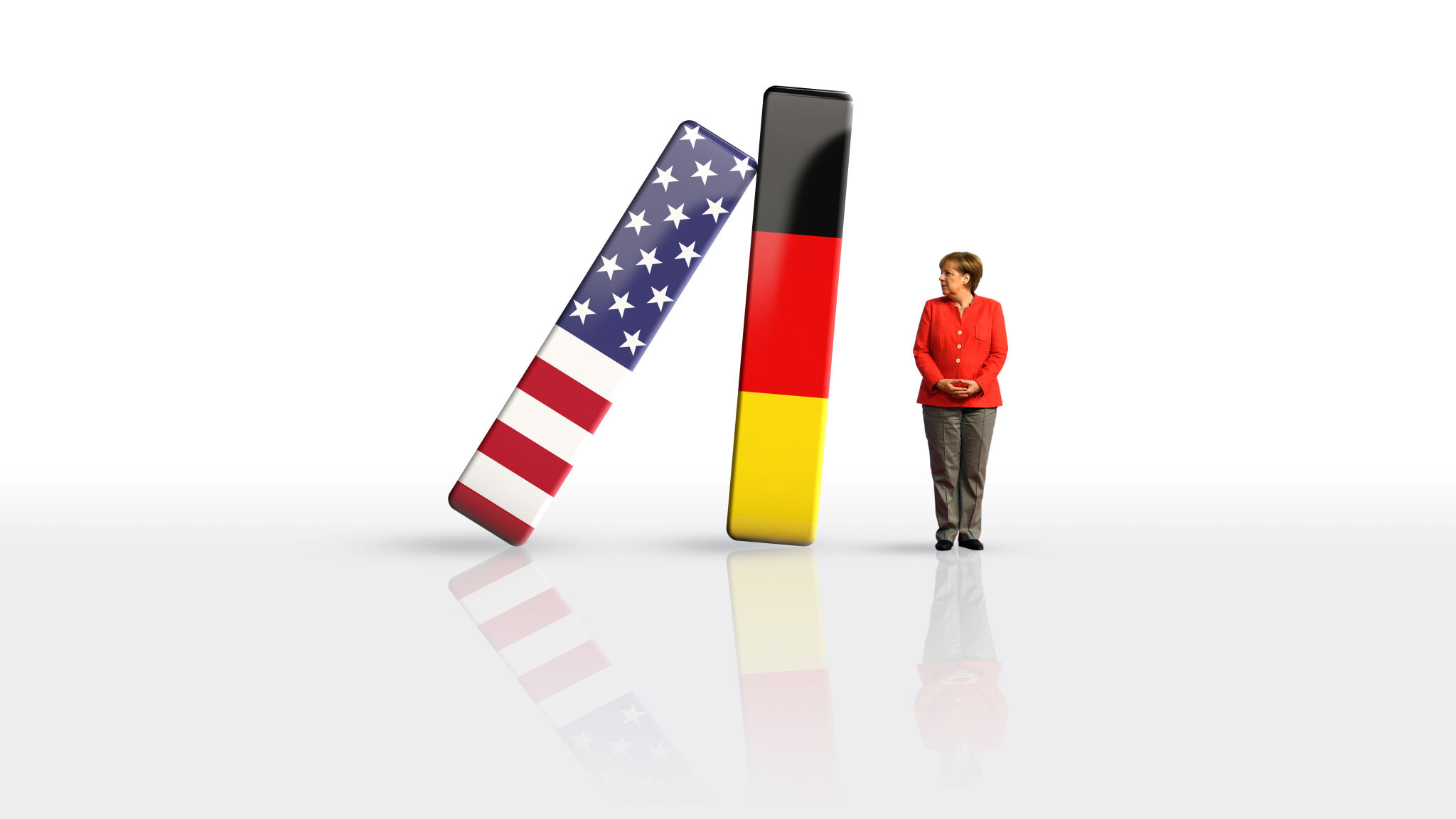 Conditions are in place for bringing Europe’s strongest economy to its knees.

Germany has a spending problem. It’s a problem that is poisoning negotiations on forming a government and threatening the nation’s relations with other countries. The various political parties all disagree on how to eliminate it.

The problem? What to do with Germany’s “cash mountain.”

Almost every other Western government is borrowing money to make ends meet. Germany’s federal government is bringing in more money than it spends. Furthermore, 15 out of Germany’s 16 states are also enjoying budget surpluses.

Just about every other country in Europe would love to have this problem.

The new German government will collect €30 billion (us$35.6 billion) more than it spends in its first year, at least according to official figures. “According to one insider, the true figure was closer to €60 billion,” wrote Philip Stephens in the Financial Times. “The politicians kept quiet because it would have been embarrassing to admit such riches while Germany’s neighbors struggle with austerity” (Nov. 22, 2017).

Germany is Europe’s economic superstar—its great success story. At 3.6 percent, Germany’s low unemployment rate is half the overall rate for the European Union, and the envy of the Continent. Its economy continues to grow steadily while other major EU countries like Spain and Italy have barely grown at all since the financial crisis in 2008.

Despite all this good news, Germany has a deadly Achilles’ heel: the United States.

Germany’s economy depends on exports, which account for nearly half of its economy.

On the one hand, Germany’s strength is that its economy relies on producing goods and selling them to other countries—unlike Britain and America, whose economies rely on their own citizens borrowing money and spending it on services.

On the other hand, this makes Germany uniquely vulnerable to global economic shocks. In 2009, its economy shrank by nearly 6 percent. The crisis hit Europe hard, and at that time over 60 percent of German exports went to Europe.

Many of Germany’s main trading partners are still recovering from the crisis. Germany, in order to pick up the slack, turned to America. In 2016, America accounted for 9 percent of German exports.

This means that nearly 4 percent of Germany’s economy comes from selling to the U.S.

Making matters worse, Germany’s exports tend to be the kind of products that people first stop buying when times are bad. In 2016, 20 percent of Germany’s export revenue to the U.S. came from the automotive industry. When recession hits, sales of new cars fall fast.

When America sneezes, the world catches a cold. But Germany’s massive dependence on exports means it is at risk of pneumonia.

This makes Germany’s exports vulnerable to big decreases. In 2009 America’s economy shrank by 2.8 percent, but its imports from Germany shrank much more. German exports to the U.S. in 2009 were 27 percent lower than in 2008.

If this happened today, the direct effects alone would cause Germany’s economy to shrink by 1 percent. Once the knock-on effect is factored in—with Germany’s other top customers all cutting back at the same time—Germany’s economy could be pushed into a serious depression very quickly.

For Germany at this time, a 5 percent fall in exports means a nearly 2.5 percent drop in the size of the economy. From 2008 to 2009, Germany’s exports fell by nearly 20 percent.

“Understanding the degree of dependency of Germany and its export growth on the U.S. becomes key to analyzing the dynamics of the German economy,” wrote Geopolitical Futures (June 29, 2017). For most of the world, the old adage holds true: When America sneezes, the world catches a cold. But Germany’s massive dependence on exports means it is at risk of pneumonia.

Few commentators detect this risk, but an exception is Geopolitical Futures founder George Friedman, who has been speaking on this potential crisis. His biggest concern? “The most important consequences of financial crises are political,” he told the 2017 cfa Institute European Investment Conference in Berlin on Nov. 16, 2017.

The result of this unemployment would be “more fuel for the right-wing parties,” he said. The entire political establishment could be discredited. “People who have never been politicians before will have more credibility than those who have been politicians for 10 years,” he said. This would lead to a “social crisis.” When asked what is the best period of history to use as a guide for what is happening today in Germany, he pointed to the late 1920s and 1930s.

Though Friedman said he felt it was “less intense” this time, this is still a remarkable statement. If we are looking at history to guide us through what is happening in Germany, we must look to the time immediately before World War ii!

Other analysts are making comparisons to this period. Harvard professor Charles S. Maier wrote an article for the New York Review of Books titled “In Merkel’s Crisis, Echoes of Weimar” (Dec. 4, 2017).

“For all the institutional safeguards in Germany’s postwar system, which were designed to prevent extremist parties from gaining seats in parliament, the September election results bear a distinct resemblance to the results of the September 1930 election for the Reichstag,” Maier wrote.

“Naturally, the ideologies of the parties of left and right in 2017 are different from those that contended in 1930, but the logic of the political divisions in the two legislatures is nevertheless similar. This can hardly be encouraging—either for the stability of any government or for the long-term health of Germany’s political culture.”

He’s right. Germany is struggling to form a government because so many people voted for the fringe left and fringe right that no standard, mainstream coalitions are possible. This is a parallel with history the Trumpet wrote about in our September 2012 issue (“Déjà Vu”).

This is the situation in Germany today—and this is in the absence of a major financial crisis. Once such a crisis hits, conditions will get even worse.

There is always a lot of furious economic debate on whether an American financial crisis is imminent. But what almost no one disagrees on is that, at some point, an American recession is inevitable.

When that happens, it will trigger a political earthquake in Germany far larger than the one it experienced in the September election.

Both Plain Truth publisher Herbert W. Armstrong and Trumpet editor in chief Gerald Flurry have written about the role an economic crisis could play in transforming Europe.

A “financial crisis in Europe … is going to bring a strongman on the scene,” Mr. Flurry said in a 2015 Key of David program titled “The America-Europe Financial Crisis.” He emphasized the dependence of the German economy on America. Now an expert in geopolitics is warning that a financial crisis in America could lead to Germany repeating the history of the 1930s. These men are giving the same warning!

For 80 years, the Trumpet and Plain Truth have blasted a very specific warning about Europe: Ten nations will unite under the leadership of a powerful German leader. That will be a big change in how Europe is constituted today—and it won’t be easy. For such a leader to rise up, a political revolution will have to occur in Germany. It will also require European powers, which have centuries of enmity among themselves, to overcome their differences to form a single superstate.

For decades, the Trumpet has said that a financial crisis—specifically one originating in America—could serve as a catalyst to revolutionize Europe.

For decades, the Trumpet has said that a financial crisis—specifically one originating in America—could serve as a catalyst to revolutionize Europe.

In fact, Mr. Armstrong discussed this with one of the EU’s greatest statesmen, the late Otto von Habsburg. He told Mr. Habsburg that he thought it would take a financial crisis to unite Europe. Mr. Habsburg agreed.

In 1984, Mr. Armstrong wrote that a massive banking crisis in America “could suddenly result in triggering European nations to unite as a new world power larger than either the Soviet Union or the U.S” (co-worker letter, July 22, 1984; emphasis added).

Mr. Armstrong “showed how the American economic danger and the European superpower will be linked,” wrote Mr. Flurry in the May-June 2015 Trumpet.

Our forecasts of this united power come directly from the Bible.

“The Bible’s prophecies about this final resurrection of the Holy Roman Empire say that it will comprise a union of ‘ten kings’ (Revelation 17:12),” he wrote. “Ten leaders, representing 10 European peoples, will join together to forge a superstate more powerful than any Europe has seen for a long time. ‘These have one mind, and shall give their power and strength unto the beast’—prophetic language for a mighty political and military empire (verse 13).

“What will cause these nations to unite so forcefully? It is very difficult to unite nations into ‘one mind’! That’s an incredibly challenging undertaking. But it is going to be done. In fact, it is taking place even now before our eyes.

“Mr. Armstrong had profound insight in specifically forecasting that the catalyst for this dramatic unification would be a massive financial crisis that starts in America and ripples out from there.”

With Germany’s politics already in crisis, just think of the effects that an economic crisis could have. “Watch the economic situation in America closely, and its effect on Europe—and see if this dramatic prophecy from Mr. Armstrong doesn’t come to pass just as he said it would!” concluded Mr. Flurry.

Nearly three years on, the stage is perfectly set for this to happen.