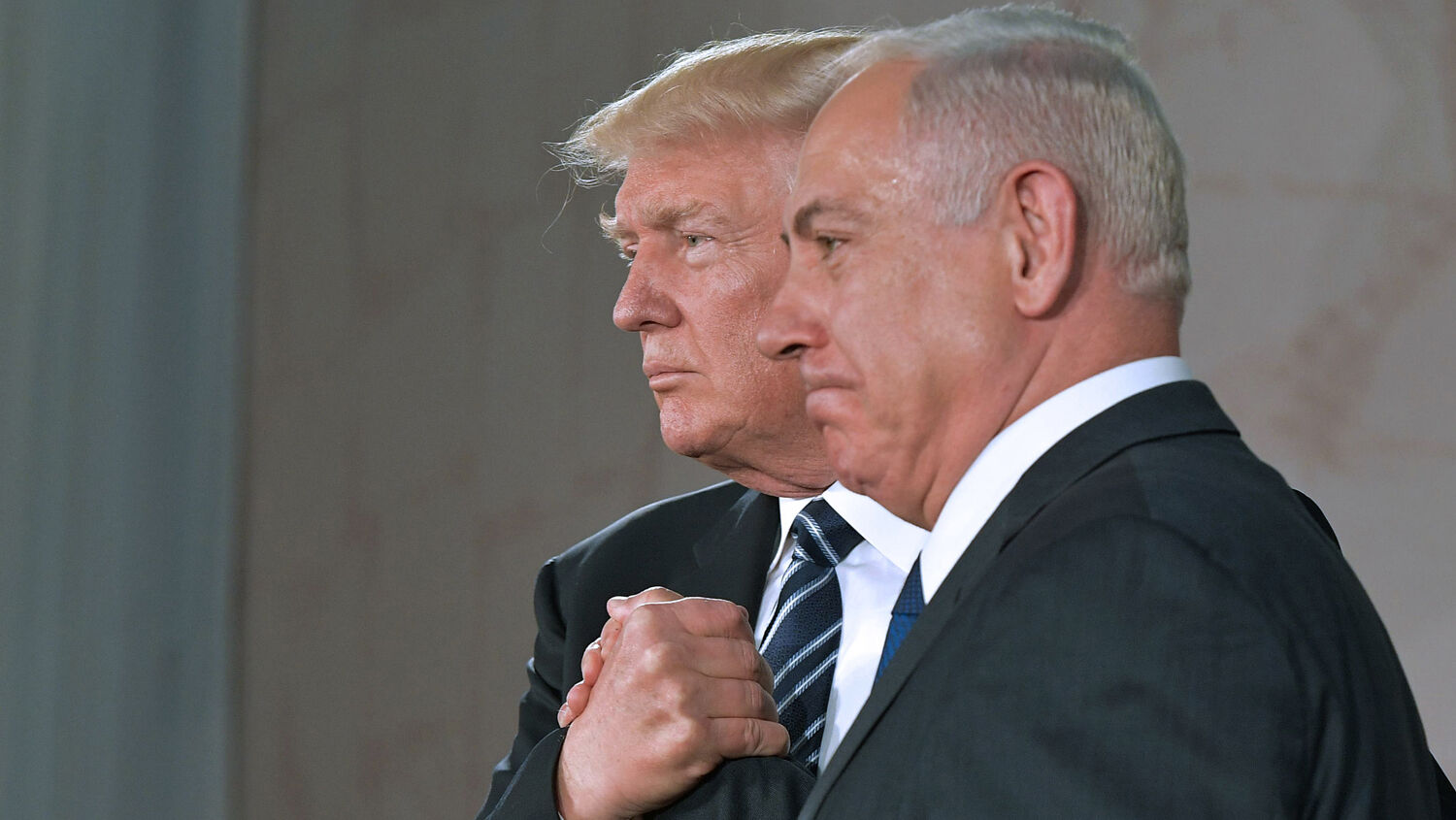 US President Donald Trump (L) and Israel’s Prime Minister Benjamin Netanyahu shake hands after delivering a speech at the Israel Museum in Jerusalem on May 23, 2017.
MANDEL NGAN/AFP/Getty Images

America’s decision to recognize Jerusalem as Israel’s capital was a good one, but not for the reasons you might think.

From the February 2018 Trumpet Print Edition

When United States President Donald Trump recognized Jerusalem as Israel’s capital on Dec. 6, 2017, the announcement pleased many Jews around the world and was an injection of confidence and hope for the people of Israel, including Prime Minister Benjamin Netanyahu. But elsewhere—throughout the Middle East, Europe, Asia and elsewhere, it was panned as a terrible blow to peace.

That the announcement was controversial is a measure of just how difficult and perplexing issues surrounding Jerusalem can be. In many ways, Mr. Trump’s support was a simple statement of fact (sidebar). It did not change the status quo nearly as much as the 2016 United Nations Security Council resolution that declared Israeli communities in the West Bank illegal and invalid. Yet that decision was universally accepted, while this was treated as though it would spark a violent intifada and destroy prospects for advancing the peace process.

Ultimately, this victory for Israel and Mr. Trump will come with a heavy price. Since the decision was made, it has been hijacked and manipulated to harm Israel, to undermine America, and to create more hostility, tension and violence in Jerusalem.

But the fallout from Mr. Trump’s decision will not be entirely negative. This announcement, and the reaction from the international community, has significantly accelerated the fulfillment of three key end-time Bible prophecies.

That means this decision thrust us much closer to the coming of the Messiah!

One: A Vanishing Superpower

One of the most significant effects of President Trump’s decision is that it will be used to undermine and marginalize America’s role as the chief broker for peace in Israel.

This should not happen. The fact that America’s president showed himself capable of telling the truth ought to inspire confidence in Washington.

But this is not the way the Palestinians, the Muslim world and the liberal West see it. They saw Trump’s announcement as a sign that the U.S. is not objective and therefore cannot be trusted to lead peace negotiations. Most people agree with Palestinian leader Mahmoud Abbas, who said that Mr. Trump had “crossed all the red lines with the Jerusalem decision” and had disqualified America as a peace broker in the Middle East.

This situation has been manipulated to attack the U.S.

A few days after Mr. Trump’s decision, representatives from 57 Muslim nations met in Istanbul to discuss how the Muslim world should respond. The gathering produced the Istanbul Declaration on Freedom for al Quds (the Arabic word for Jerusalem). Among other conclusions, this dossier stated that America could no longer be recognized as an “unbiased” voice in peace talks.

The Arab nations were supported by leaders of the United Nations and Europe, and even the pope, all of whom forcefully condemned President Trump’s decision and said that it undermined peace in Israel and Jerusalem.

The way this situation has been manipulated to attack the U.S. is significant.

Regular Trumpet readers will be familiar with the end-time prophecies in Daniel 11:40-45, Ezekiel 38 and Isaiah 10. These prophecies (among others) describe the emergence of three powerful Gentile powers: a German-led European empire, the Iran-led king of the south, and an Asian conglomerate, led by the “prince of Russia” (Vladimir Putin). Daniel 11 and Ezekiel 38 do not discuss America (nor Britain). Isaiah 10 does discuss America, but it depicts the U.S. as a helpless victim of the German-led European beast power.

The absence of the U.S. in these end-time prophecies is telling: By the time these events unfold, America has been marginalized as a world player.

Now let’s notice a more specific prophecy in Hosea 5:13. This end-time prophecy says, “When Ephraim saw his sickness, and Judah saw his wound, then went Ephraim to the Assyrian, and sent to king Jareb: yet could he not heal you, nor cure you of your wound.” Proving the identity of Ephraim (Britain), Judah (the Jewish state) and Assyria (Germany) is not that difficult. You can prove it for yourself by reading our free book The United States and Britain in Prophecy.

Trumpet editor in chief Gerald Flurry explained more than 20 years ago that this prophecy is about Israel’s peace process. The term “wound” describes Israel’s struggle with the Palestinians. (This is proved thoroughly in Jerusalem in Prophecy, free upon request.) But notice: America is not even mentioned! The time is coming when Israel will not look to America for help in the peace process.

Why not? Because the U.S. will have been pushed out of that process!

Part of the reason America is sidelined, Mr. Flurry explains in Jerusalem in Prophecy, is that by this point, America “will be too weak and too sick itself to help.”

President Trump’s decision to recognize Jerusalem lit a fire in European capitals. Following the announcement, many European leaders and journalists openly called for Europe to get much more involved in the peace process.

“The European Union will engage even more with the parties and with our regional and international partners,” European Union Foreign Policy Chief Federica Mogherini said Dec. 7, 2017. She also said the announcement “could diminish the potential role” of the U.S. The EU is “now determined to play an even more convinced and active role in trying to relaunch the peace process” (emphasis added throughout).

“We’ve been waiting already for several months for the American initiative, and if one is not forthcoming then the European Union will have to take the initiative.”

The Germans seemed especially enthused about the opportunity to get more involved in Israel. A few days after the announcement, Der Spiegel ran an editorial titled “Time for Europe to Take the Lead on Peace.” The article said Mr. Trump’s decision “disqualifies the United States as a mediator.” Thus “it is now up to us—the Europeans, the Germans—to come up with new ideas and new formats” for securing peace between Israel and the Palestinians (Dec. 8, 2017).

German Foreign Minister Sigmar Gabriel made similar remarks. According to von Mittelstaedt, “No other conflict should be as important to Europe as the one between the Israelis and the Palestinians.” She also said that Germany and Europe needed to develop a peace strategy in “cooperation with moderate Arab countries” in the region.

Does this sound familiar? The prophecy in Hosea 5:13 states, “When Ephraim saw his sickness, and Judah saw his wound, then went Ephraim to the Assyrian ….” Here is how Mr. Flurry explained it, again, more than 20 years ago: “Hosea prophesies that wounded Judah [Israel] and sick Ephraim [Britain] will go to Germany for help. Why? Because America is even sicker than both of them and can be of no help at that point!” (Hosea: Reaping the Whirlwind; emphasis his).

President Trump’s decision, and Europe’s promise to get more involved in Israel’s peace process, brings this prophecy into dramatic focus. This prophecy has not been fulfilled completely, but it is getting easier to see that it soon will be!

America recognizing Jerusalem as Israel’s capital reinforced the popular narrative that the Palestinians are helpless victims and that Israel is a tyrannical apartheid state. That is not the truth. But even in the West, the accepted narrative is the one espoused by Turkey’s radical president, Recep Tayyip Erdoğan. Following Mr. Trump’s announcement, he stated: “Palestine is an innocent victim,” and “Israel … is a terrorist state—yes, terrorist!” (Dec. 10, 2017).

Sa’adollah Zaeri is an Iranian journalist with connections to Iran’s Islamic Revolutionary Guard Corps. He admitted that President Trump’s decision has advantages for Iran and the Palestinians. “This situation … makes Iran’s work in forming a resistance front with a focus on defending Palestine easier,” he wrote for the Tasnim News Agency.

Speaking from Gaza following President Trump’s decision, Hamas leader Ismail Haniyeh called for a third intifada and stated that the Palestinians should not stop fighting until Jerusalem and the West Bank have been liberated. Remarks like these, and those from Turkey’s president, explicitly promote violence. Yet who in the West will condemn Erdoğan or Hamas or Palestinian leaders for inciting violence against Israel?

The truth is, many believe such remarks are a justifiable response to Mr. Trump’s decision. After the announcement there was a massive outpouring of compassion for the Palestinian cause. In the end, the Palestinian cause will likely come through this stronger, healthier, with greater global sympathy and support.

Sadly, Israel’s response to the hostility and persecution it faces will result in much greater pain and suffering. The prophecy in Hosea says that Israel, instead of trusting in God, as many of its ancestors did (such as David, Jeremiah and Hezekiah), trusts in its own judgment. Instead of relying on God, Israel rushes into the arms of Germany and Europe, even though much of the anti-Israel, pro-Palestinian discourse originates in Germany and Europe.

Trusting in Germany will prove to be a painful mistake. Hosea 5:13 says, “[Y]et could he [Germany and Europe] not heal you, nor cure you of your wound.” Here is what Mr. Flurry wrote more than 20 years ago: “It seems the Israelis can trust their worst historical enemy, but they can’t trust God to protect them! And God is their only source of help” (op cit; emphasis his).

Where It Will End

Prophecies in Daniel 11 and Matthew 24 also discuss Germany’s involvement in Israel, and specifically in Jerusalem. Daniel 11:41 says that following its clash with the king of the south (Iran-led radical Islam), the king of the north (the German-led European power) immediately enters the “glorious land,” or Jerusalem.

In fact, as Mr. Flurry writes in Jerusalem in Prophecy, there is a “strong indication that the [Daniel 11:40] war was triggered over that city.” Jerusalem is the German-led king of the north’s “main concern.” “The Vatican and Germany are the heart of the Holy Roman Empire,” writes Mr. Flurry. “They have conquered Jerusalem several times before. And they are destined to do so one last time!” (ibid).

The issue of Mr. Trump’s decision and its repercussions is such a paradox. On one hand, there are many, many tragic repercussions. It is inciting greater hatred of Israel, and uniting much of the world against the Jewish state. It is also causing America, Israel’s primary ally since World War ii, to be sidelined from the peace process. Finally, it is driving Israel into the arms of the nation responsible for the Holocaust, a nation with a long-standing history of anti-Semitism.

This decision thrust us much closer to the coming of the Messiah!

On the other hand, this decision accelerates the fulfillment of some key end-time Bible prophecies. Prophecies in Daniel, Isaiah and Matthew 24 clearly warn that events in Jerusalem are the catalyst that initiates the return of Jesus Christ.

Jerusalem, Mr. Flurry has stated, is the primary “thermometer” we use to detect when the Messiah is about to return. And the thermometer reading is off the charts!

To learn more about what to expect in the Holy City in the time ahead, request our free booklet Jerusalem in Prophecy.