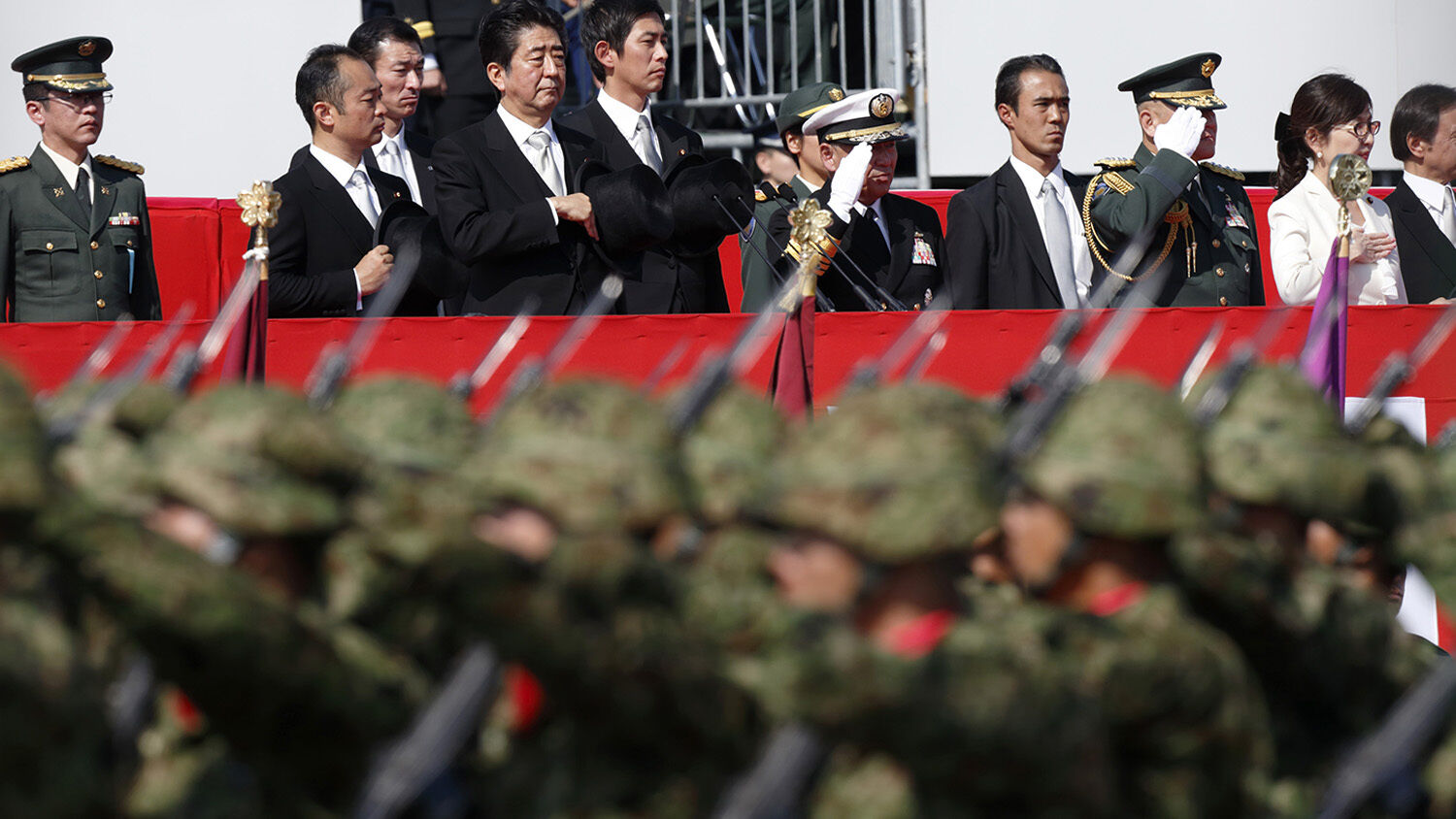 Watch a film about World War ii and the Japanese, and you’re bound to come out thinking the Japanese are a brutal, ruthless nation. There are the kamikaze airplane fighters, or the suicide bombers, as so vividly portrayed in the hbo miniseries The Pacific or Mel Gibson’s Hacksaw Ridge. Then there’s the brutal prisoner of war camps seen in To End All Wars or the recent film on Louis Zamperini, Unbroken.

Old stereotypes die hard. Actually, since 1947, when United States Gen. Douglas MacArthur and his staff wrote a new Japanese Constitution, pacifism has been Japan’s guiding principle in war. According to the Constitution’s famous Article 9, Japan would “forever renounce war as a sovereign right of the nation.” The more accurate stereotype of those past decades would be the pacifist-at-all-costs. In Japan, there’s even a name for this: heiwaboke. Or in English, “peace idiot” or “peace at any price.”

But the tides are turning again. As the Trumpet has tracked in a trend article, “Why the Trumpet Watches Japan’s March Toward Militarism,” the past few years have seen Prime Minister Shinzō Abe spearhead the antipacifist movement. Even in the past few months, there have been a number of developments in this direction, none particularly radical, but all moving toward the same goal. The influence of the heiwaboke have waned. First, there’s the issue of nukes; second, missile defense; and finally, record spending.

Finding a Cure for the ‘Nuclear Allergy’

In 2012, Japan historian Kenneth B. Pyle, described what he called the “eight noes” of Japan’s post-1945 security policy: no overseas deployments, no exercise of collective self-defense, no power projection capability, no nuclear arms, no arms exports, no sharing defense technology, no military spending above 1 percent of gross domestic product, and no military use of space. In 2015, Pyle gave an update: “The ‘eight noes’ are all gone, except the nuclear option.”

This is natural because of what is known as Japan’s “nuclear allergy.” Japan is still the only nation ever hit by nuclear weapons. And Fukushima is the only other city, besides Chernobyl, to become a household name because of a nuclear meltdown. When you read descriptions of nuclear devastation, like those in John Hersey’s Hiroshima, where people’s skin falls off as you grab their hands, it’s not hard to understand the Japanese’s hypersensitivity.

Yet even the phrase nuclear allergy implies, as the Diplomat wrote recently, that the attitude is “unhealthy and must be treated.” Many analysts now think it’s time for a cure.

“If Japan had that nuclear threat, I’m not sure that would be a bad thing for us,” a campaigning Donald Trump told the New York Times on March 25, 2016. In the next week of campaigning, he went on to repeat this idea. Japan faced a new, unprecedented threat from North Korea, and arming itself with nuclear weapons would be for the good.

President Trump is hardly the lone voice. Henry Kissinger—former U.S. Secretary of State and essentially the foreign-policy expert of 20th-century America—said that if North Korea continued to have nuclear weapons, “nuclear weapons must spread in the rest of Asia.” Doug Bandow, an adviser to President Ronald Reagan, argued that America should reconsider its nuclear umbrella that protects Japan. And Masahiro Matsumura, a professor of international politics at St. Andrews University, recently argued that the best way to protect Japan’s security was through “nuclear sharing,” a program that America has with a number of European nations.

As for the Japanese, one of their former defense ministers, Shigeru Ishiba, said in September that Japan should debate abolishing its “three non-nuclear principles”: not possessing, producing or hosting nukes on Japanese soil. Even before that, as the Diplomat wrote, Abe’s government responded to questions about stationing nuclear weapons on Japanese soil by saying that “Article 9 does not prohibit” their presence.

Even if none of these arguments gain real traction, the reality is that in an emergency, even without a head start, it would take mere months for Japan to go nuclear. There’s a story that Asia Time’s Doug Tsuruoka tells about Japan’s capabilities:

When I was a correspondent in Tokyo in the late 1980s, one of the lighter anecdotes about Japan developing its own nuclear weapons concerned a foreign reporter’s interview with a Japanese defense official. Queried on how long it would take Japan to build a nuke if it absolutely had to, the official launched into a circumloquacious discourse. He said it would be unthinkable due to public opposition, unthinkable for a crowded nation within easy range of Chinese missiles to engage in a nuclear arms race, and so forth.

As he did this, the official silently traced the number “6” with his finger on the table in front of him—for six months. That’s how long he estimated it would take Japan to fashion a bomb from reactor-grade plutonium taken from one of its nuclear power plants.

Missile seems to be a dirty word for Japanese pacifists: Missiles from North Korea are terrible; missiles for self-defense are just bearable; but missiles for offensive war are unthinkable. So any upgrades must be portrayed as for defense only.

A typical scenario played out earlier this month. On December 4, Reuters reported that unnamed sources had told it that Japan wanted to buy air-launched missiles that would be able to strike North Korea. But Defense Minister Itsunori Onodera quickly told reporters they weren’t looking into funding such missiles. Then, on December 8, Reuters confirmed Japan would “acquire medium-range, air-launched cruise missiles, capable of striking North Korea.” The official defense budget released on December 22 confirmed this.

These missiles can be used for “preemptive strikes,” but they are strictly for defense, of course. “Our way of thinking has not changed at all,” Onodera told the press. He denied all charges that the changes could constitute a change from the “strictly defense-oriented policy.” As it has been in the past, the best excuse for offense is a good defense.

Then there are the missile defense structures, which has become a topic of extreme interest since North Korea has continued to send missiles over the Japanese sky. There’s also the increasingly prevalent idea that America hasn’t the will to protect them in a crisis—something President Trump has not aided in removing.

Japan has relied on a two-tiered ballistic missile defense system. One part based on land, the other on the sea. But the land-based system—bought from the United States—consists of Patriot missile batteries, which reportedly only have a range of about 12.5 miles (making them, as Defense One wrote, “useful only if they happen to be placed quite near an incoming missile’s target”). The sea-based system—also from the United States—called the Aegis bmd system, could cover the whole country, but it relies on ships being in the right place at the right time.

So the solution has been to adopt the Aegis system on land. The system is what the U.S. calls Aegis Ashore, and Japan announced on December 19 it would buy two of them to cover the mainland for around $1.8 billion. It has been rumored that Japan was looking at the system since 2014, but recent events have turned those speculations into realities.

No matter how many times one is reminded of it, it remains shocking given that while the most famous article in Japan’s Constitution forbids it from maintaining “land, sea and air forces,” it ranks year after year at the seventh or eighth position of the world’s largest military spenders. And defense spending continues to increase.

Prime Minister Abe turned around a dip in defense spending when he came into office in 2012. The latest budget, though, is the biggest ever. In 2018, Japan will spend $46 billion, a figure that exceeds the gdp of more than half the countries in the world. It represents a 1.3 percent increase over this year’s budget.

Compared to the real spenders, like the United States and China, it must be admitted that 1.3 percent increases won’t exactly put Japan ahead of the game. President Trump campaigned on a 10 percent increase in defense spending, and last year China’s defense spending rose 7.6 percent. This perspective makes Japan look like it’s fishing in a small pond. But it’s one thing to be the world’s hesitant policeman or its most populous nation, and another to be an emerging (hopefully without disturbing the heiwaboke) pacifist nation. Japan still has the third-largest economy in the world and, with the click of its fingers, could rearm. It’s all a matter of will. And that part is changing.

It is not the point of this article to judge one side of Japan’s debate as right or wrong. Clearly, those designated as heiwaboke—“peace idiots”—who would uphold the Constitution even in the light of North Korea’s increasing belligerence, take the moral side of the argument more seriously. They side with General MacArthur who wanted to make sure Japan could never repeat its past, just as Winston Churchill agreed about Germany at the Yalta Conference: “It is our inflexible purpose to destroy German militarism and Nazism and to ensure that Germany will never again be able to disturb the peace of the world.” They say the U.S. can protect Japan.

The other side, taking pragmatism and realism as their weapons of logic, believe there will come a time when Japan may be forced to protect itself without anyone else’s help. Evil exists and they must be prepared.

At the Trumpet, these are not the end issues. Everything we write about points to the future, because we believe the Bible gives us a picture of how it will unfold. We have explained in numerous places what Japan’s steady march toward militarism will mean for the future, but this one is taken from the abovementioned trend article:

In 1971, when Japan was still staunchly pacifist, educator Herbert W. Armstrong predicted that the nation would awake from its postwar slumber and return to formidable militarism. “Japan today has no military establishment,” he wrote. “But we should not lose sight of the fact that Japan has become so powerful economically that it could build a military force of very great power very rapidly” (Plain Truth, March 1971).

Mr. Armstrong’s view was informed by specific Bible prophecies. Journalists sometimes mention the biblical word Armageddon found in Revelation 16:16, but it is rare to hear talk of “the kings of the east” discussed in verse 12 of that same chapter. The Bible shows that these “kings of the east” will be a massive bloc of Asian nations that pool their militaries together in the end time. They do this in order to confront another power bloc led by Germany.

You may not at first easily link the stale language of Aegis Ashore and 1.3 percent budget increase with the biblical language of “the kings of the east” or “Armageddon,” but our booklet Russia and China in Prophecy will show how all these elements are connected. While Japan will play a big role in the future, it’s not currently in a position that will allow it to. Every step, every small move, like the ones described above, move it closer and closer to that end.