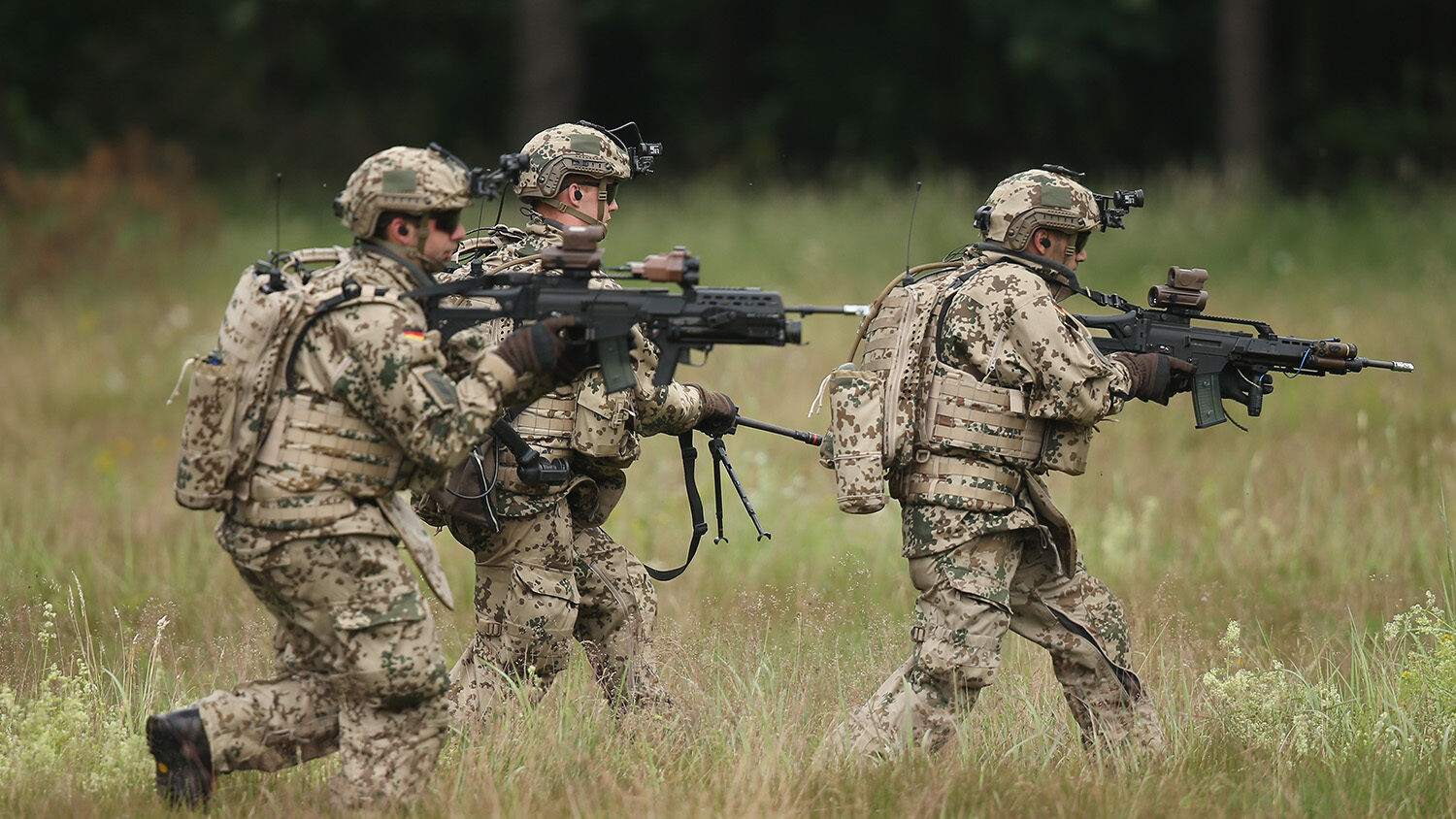 Japan and Germany are turning their defensive needs into offensive capabilities.

When it comes to finding hidden meanings in texts, the first place award doesn’t go to your old high school English teachers; it goes to the constitutional scholars. Just give this group of intellectuals a few decades of free reign, and they could come up with good Orwellian reasons for why “war is peace” and “freedom is slavery.” Seven decades of constitutional scholar’s work on the two supposedly “pacifist” constitutions of Japan and Germany have meant they can both send their armies abroad. And in March and April 2017, with the previously unthinkable becoming commonplace in Japan and Germany, those scholars have made possible the newest argument for military buildups: To modify a familiar saying, the best excuse for an offense is a good defense.

Or in other words, as Japanese and German politicians are arguing: To defend ourselves, we need a proper offense.

On March 30, Japan’s ruling Liberal Democratic Party (ldp) submitted a report to the Japanese Diet (parliament) which suggested the “exploration of ‘counterattack’ capability” for its Self-Defense Force (sdf). The reason given was the threat of North Korea. Thus, for the first time since World War ii, Japan is debating the use of offensive weapons to defend itself.

Then, on April 5, Germany’s Defense Minister Ursula von der Leyen announced that the Bundeswehr would begin to “defend itself ‘offensively’” with an upgraded cyberunit of 13,500 soldiers.

But before we get into the details, let’s explain the context. After World War ii, Japan and Germany wrote new constitutions. The Japanese would “forever renounce war as a sovereign right of the nation and the threat or use of force as means of settling international disputes.” German “acts tending … to disturb the peaceful relations between nations” would be unlawful. Their constitutions were supposed to stop them from developing armies capable of offense. The United States, instead, would protect their interests with its nuclear umbrella.

Japan’s excuse came only a month after it threw off its defense-spending limits at the beginning of March. The group which submitted the recommendation report was full of former defense ministers, former deputy defense ministers and former parliamentary vice ministers.

“Japan should arm itself with long-range offensive weapons,” Bloomberg reported the policy research group as saying. “North Korea’s provocative acts have reached a level that Japan absolutely cannot overlook,” the group said. “We should not waste any time to strengthen our ballistic missile defense.”

Former Defense Minister Itsunori Onodera gave reporters the group’s reasoning after the meeting: Japan wouldn’t be able to cope with multiple attacks. “Neutralizing an enemy base (and preventing the launch of) second and third missiles is within the range of self-defense,” he said. Right now, the Japanese can “defend, but they can’t punch back,” former Navy Capt. Carl Schuster told cnn. In order to defend themselves, Japanese politicians believe they need to punch back.

With that quick sleight of hand, defense becomes offense, and, as Renho Murata, the leader of Japan’s democratic party put it, “the cornerstones of the peaceful nation of Japan” are “falling down.”

Germany’s excuse became a reality on April 5. As Defense Minister Ursula von der Leyen officially announced the “historic day for the Bundeswehr,” she told her audience that in the first two months of the year around 280,000 cyberattacks had hit the Bundeswehr. The attacks come daily, she continued, from simple espionage, data theft and destruction, manipulation and influence attempts.

No country can afford to be complacent with its cybersecurity. But here comes the kicker straight from von der Leyen (emphasis added):

If the networks of the Bundeswehr are attacked, we are allowed to defend ourselves. As soon as an attack hinders our ability to act, we are permitted to go on the offensive.

Marcel Dickow, a defense and cybersecurity expert, told the Irish Timesthat “any cyber command worth its salt can only defend if it knows how to attack—finding weaknesses in its own networks, and others.”

He’s probably dead right, but that’s not the problem. The problem is that saying you need to attack in order to defend is the thin edge of the wedge. How far in advance can one take preventative measures? Who decides where the Bundeswehr will attack? Who decides when attacking for defense has instead become attacking for its own sake?

To quote another party leader, Christine Buchholz from the Left Party, railing against the changes: “I’ve no problem with the Bundeswehr protecting itself from a cyberattack, but this is about the Bundeswehr gaining access to others’ networks. This is a defense buildup in cyberspace, which I reject as wrong.”

It’s not that these measures Japan and Germany are taking to protect themselves wouldn’t be prudent in normal circumstances. It’s not that, in a world of constant war, protecting yourself against enemies is the only rational approach for nation states. It’s not even that these excuses for offense don’t make sense—they always do.

The reason these excuses, these rationalizations, are so dangerous is that humans haven’t gotten rid of human nature. National characteristics, as un-politically correct as they are, still exist—whether by heredity or geography—and they arise in times of crisis. It was for no small reason Japan and Germany had their constitutions rewritten. Those documents, mere words on paper if not enforced, were to be checks on nations with histories of initiating deadly wars. If they are pushed aside, which is what is happening right now, what can we expect but the repetition of history?

And yet, there is an even more important reason. As the Trumpet and its predecessor the Plain Truth have been warning since the end of World War ii, the Germans “plan to come back and win on the third try” (radio broadcast, May 9, 1945). Why this prediction? Because it says so in your Bible. And because, no matter what the secularists will say, the Bible has a message for our day. Germany is the leader of a power bloc in the north; Japan will be part of a power bloc in the east.

So when Japan’s and Germany’s politicians and generals, no matter their sincerity, convince their countries they need to go on the offensive in order to defend themselves, they’re not on the path to peace. They’re on a slippery slope to war.