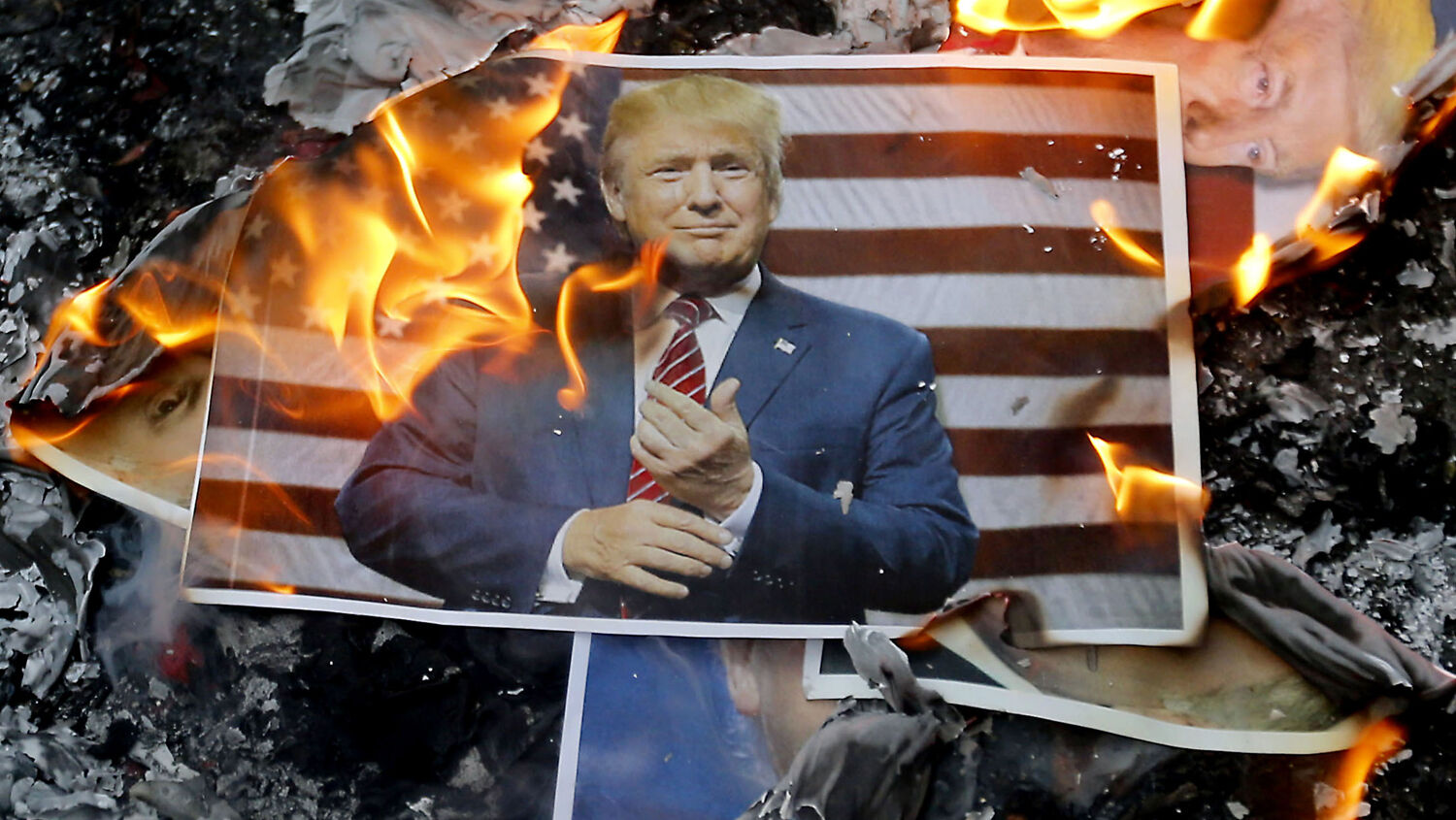 A portrait of U.S. President Donald Trump burns in Tehran on December 11, during a demonstration denouncing his declaration of Jerusalem as Israel’s capital.
ATTA KENARE/AFP/Getty Images

The Islamic Republic of Iran is exploiting America’s decision on Jerusalem and inciting a new intifada.

United States President Donald Trump’s decision last week to recognize Jerusalem as the capital of Israel will only accelerate the imminent destruction of the Jewish state, Iranian leaders have warned.

They plan to play a key role in that destruction.

During a conference of senior Iranian military officials on December 11, Defense Minister Brig. Gen. Amir Hatami reportedly said that President Trump’s decision “will hasten the destruction of [Israel] and will double unity among Muslims.” He pledged Iran’s full support of militant Palestinians, saying, “The occupying regime of Israel knows the illegitimate actions of the U.S. government will bring no change to al-Quds [Jerusalem] as the Palestinian people and the freedom-loving people of the world will become more determined than ever to become united and stand up for liberation of Jerusalem and the land of Palestine.”

Suleimani’s Quds Force is an elite unit of the Islamic Revolutionary Guard Corps that answers only to Supreme Leader Ayatollah Ali Khamenei and is responsible for covert operations in other countries. News watchers know that General Suleimani and the Quds Force have advanced Iran’s hegemonic ambitions in Syria, Iraq and Iraqi Kurdistan more than anyone or anything else. A refocus of their attention on Israel is extremely significant.

Bloomberg News paraphrased Suleimani as also saying that “other forces in the region are ready to defend the al-Aqsa Mosque in Jerusalem.” By invoking al-Aqsa and religion, Iranian leaders are working to gain maximum traction from their incitements. Those “other forces” include Hezbollah, whose leader called on militant Islamists in the region to devise a unified strategy to fight for Jerusalem.

The Trumpet watches these developments closely because of what the Bible says about Israel and Jerusalem in the times we are living in.

The world is up in arms over U.S. President Donald Trump’s announcement … to recognize Jerusalem as the capital of the Jewish state of Israel. People are bracing for violence. No city stirs passions like Jerusalem!

It is remarkable to see this city continually in the news. But when you understand the Bible’s prophecies, you know why this is the case.

The truth is, no city stirs God’s passions like Jerusalem! This city is extremely important to God—like no city on Earth.

Prophecy shows that Jerusalem’s eruption into violence will be the trigger for end-time events. You can read about this in my booklet Jerusalem in Prophecy. This move by the Trump administration could hasten that violence. We need to be watching closely for the fulfillment of these urgent end-time prophecies!

Never has it been more important to understand what is going on in Israel and in Jerusalem than it is now. And Iran will play an important role in that. If you don’t already have your own personal copy, please request your free copy of Jerusalem in Prophecy. Also, if you haven’t already subscribed for our Trumpet Brief newsletters, you can do so here—these daily e-mails will keep you keep abreast of the news that matters most.