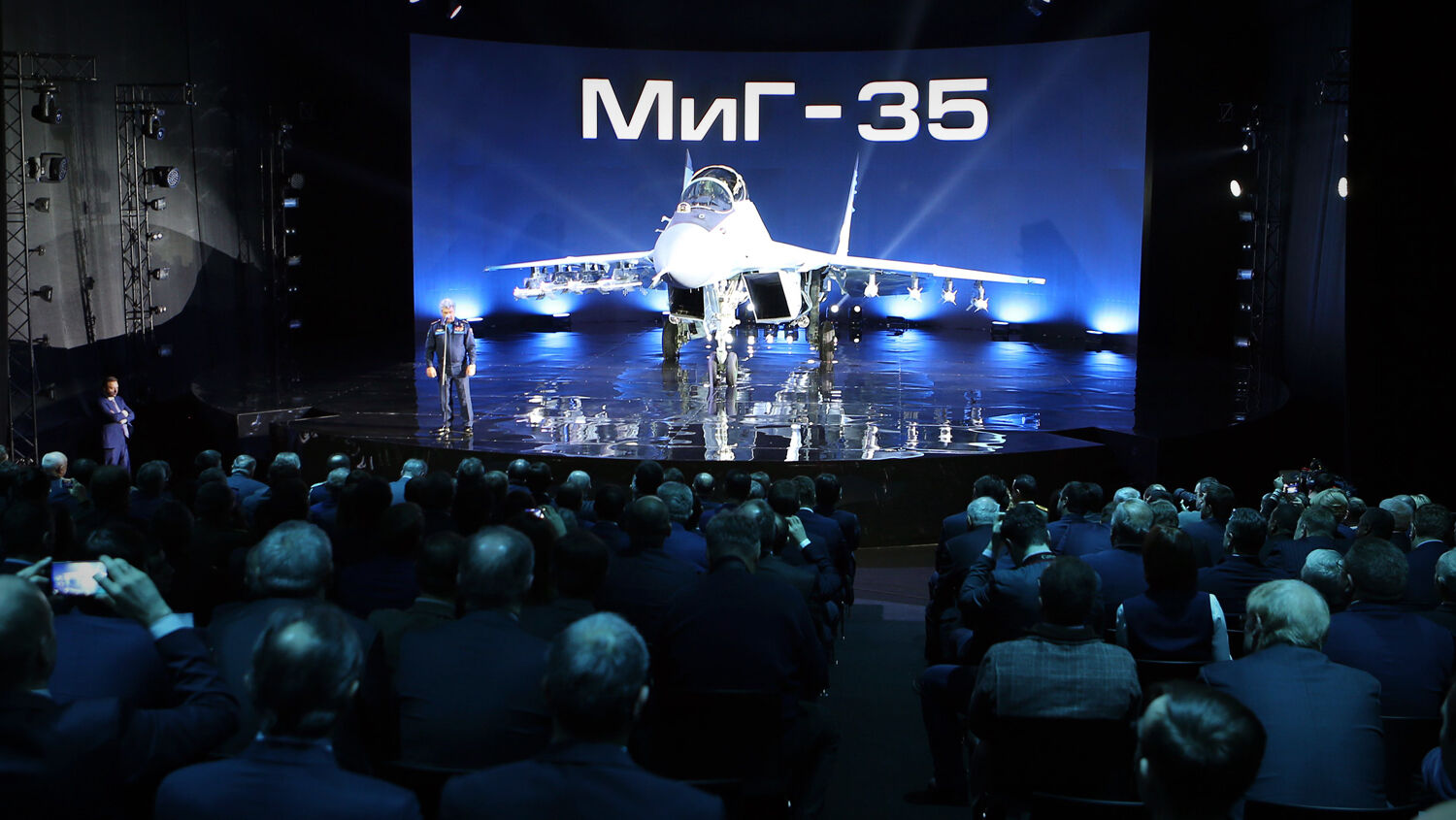 A Russian multipurpose jet fighter MiG-35 is displayed at the MiG plant in Lukhovitsy on January 27. The MiG-35 jet fighter is an upgrade on the MiG-29.
MARINA LYSTSEVA/AFP/Getty Images

Putin urges military manufacturers to be ready for battle.

Russian President Vladimir Putin commanded his country’s top military manufacturers to be ready to increase arms production in the event of a sudden declaration of war.

“The economic ability to increase the production of defense products and services quickly is a vital element of military security,” Putin told senior defense officials on November 22. “All strategic and simply large companies, regardless of the type of ownership, must be able to do this.”

This proclamation comes only two months after the weeklong Zapad 2017 military exercises held in Russia’s westernmost states. The war games involved thousands of soldiers, and were designed to test Russian defenses against a simulated attack by Western nations. Though Putin had high praise for the Russian troops in his address, he noted that the readiness of military manufacturing companies left much to be desired.

“We need to review once again the defense companies’ ability to quickly increase output,” Putin said, reading a prepared statement for the meeting. “The exercise has exposed certain shortcomings. We must analyze them so as to propose additional measures to enhance mobilization readiness.”

These are alarming statements. Many East European nations are growing concerned by Russia’s increasing military preparedness, despite its denial of any intention to provoke a war with nato.

The Zapad 2017 military drills were not free of controversy. After two Russian jets were discovered over Lithuanian airspace during the final days of the exercises, the Russian ambassador to Lithuania was summoned to provide an “immediate explanation.”

The incursion itself did not amount to anything; yet as Newsweek reported, the annexation of Crimea gives countries such as Lithuania, Latvia and Estonia a right to be worried about Russia’s plans for expansion. “[T]he increased air force presence during a time of tense relations and high Russian military reinforcement has repeatedly unnerved Baltic allies who have argued it makes it all the easier for Russia to mask any potential assault,” it wrote.

A day before Putin’s call for greater wartime preparedness, he spoke of the need to catch up and overtake the West’s military dominance. “Our army and navy need to have the very best equipment—better than foreign equivalents,” he said. “If we want to win, we have to be better.”

As Trumpet editor in chief, Gerald Flurry, wrote in his 2004 article “Russia Frightens Europe—and Fulfills Bible Prophecy,” Europe has much to fear from an increasingly militaristic Russia.

For a start, Russia during World War ii was violent and dangerous. The Red Army of Soviet Russia was certainly on the right side of the war. But it was also responsible for numerous atrocities during its prolonged conflict with the Axis powers of Europe. Enemies and civilians alike suffered terribly from this imperialistic superpower.

Second, Russia has a vast stockpile of nuclear weapons left over from the arms race during the Cold War—weapons of mass destruction that could be used against the rising power of a German-led Europe.

However, the most important reason to fear a more war-ready Russia is the iron-clad word of Bible prophecy. In Daniel 11:44-45, God speaks through His prophet to those living in the end time. This passage discusses the king of the north—a German-dominated European Union—and its future.

“But tidings out of the east and out of the north shall trouble him [note the direction of Russia from Europe]: therefore he shall go forth with great fury to destroy, and utterly to make away many. And he shall plant the tabernacle of his palace between the seas in the glorious mountain; yet he shall come to his end, and none shall help him.”

The Trumpet has been watching the rise of the Russian behemoth for many years now. In our trend article “Russia’s return to superpower status,” writer Jeremiah Jacques stated,

The Bible warns us to expect a great power rising from the East. It calls it “the kings of the east” (Revelation 16:12). Around the year a.d. 90, the Apostle John recorded an amazing prophecy about this eastern power bloc: “And the number of the army of the horsemen were two hundred thousand thousand: and I heard the number of them” (Revelation 9:16).

That means this Asian force will have an army of 200 million men! That is more people than were alive in the world when this prophecy was recorded. This is an end-time prophecy that we are certain to see fulfilled very soon.

The Bible tells us that this army is to be greatly feared. Its formation spells doom for millions of people. Yet there is a silver lining to this dark cloud. For more information about where the uptick in Russian military readiness is leading and the bright future beyond, read Gerald Flurry’s article “Russia Frightens Europe—and Fulfills Bible Prophecy.”