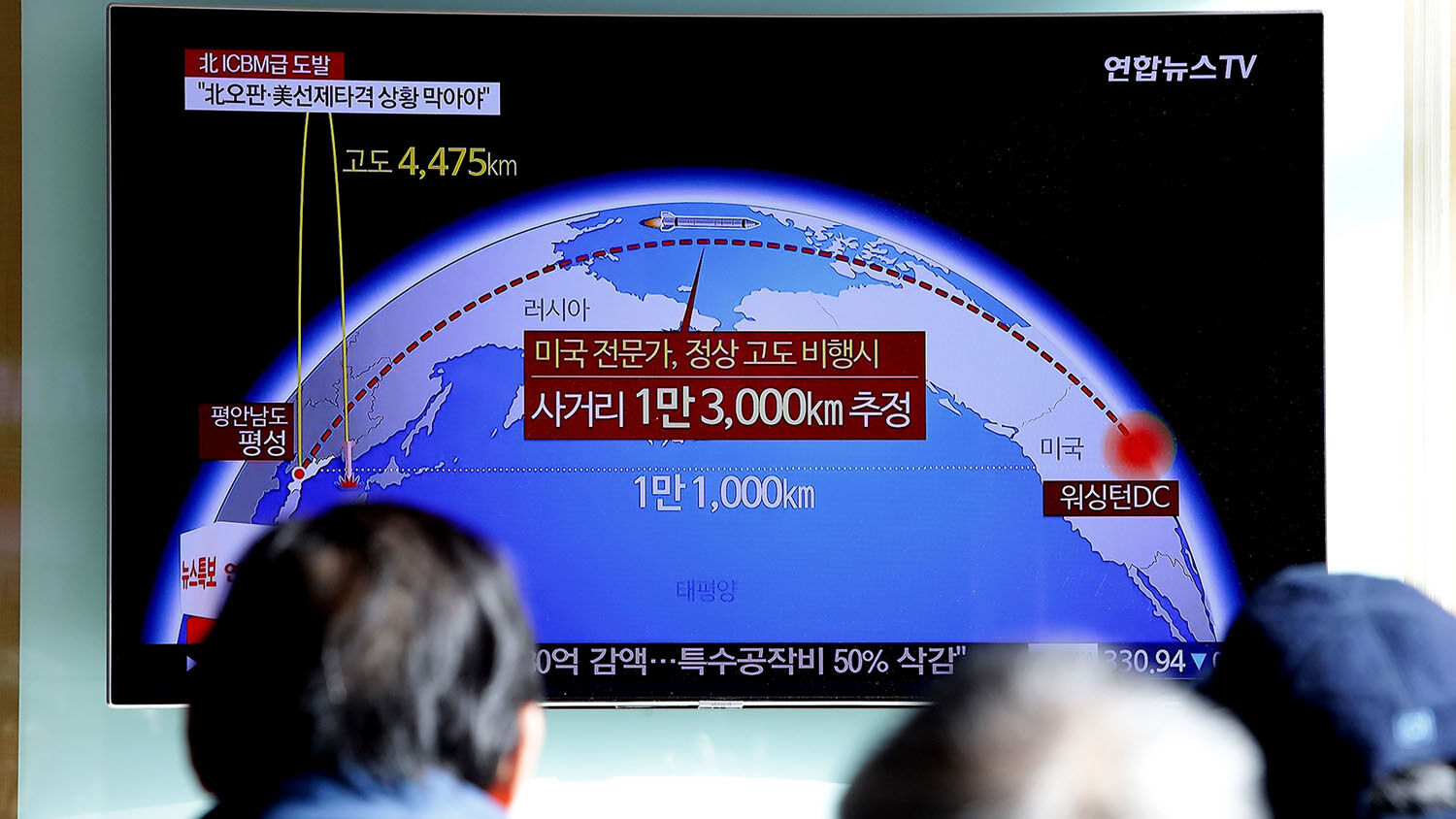 The threats in today’s world are multiplying, but how many people are even paying attention?

This week we are watching two huge stories of life-and-death import: North Korea’s newest icbm that reportedly puts the entire United States within reach, and Russia’s ownership in the world’s uranium market and potential for selling to Iran.

In the face of these existential dangers, America’s leadership is consumed with infighting.

If your reaction to these stories is, Ho-hum, what’s new?—then perhaps you can understand why, as Gerald Flurry recently put it, Nuclear Armageddon Is ‘At the Door.’

Apparently it will take a mushroom cloud over an American city before most people take these threats seriously.

Early yesterday morning, North Korea launched its most advanced missile yet. It reached a record height of 2,800 miles and landed just off Japan’s coast. North Korean state media said this new “most powerful icbm” could carry a “super-large heavy warhead” to reach the “whole” U.S. mainland. This morning, they released a trove of photos of the missile. Rocket experts were able to verify that it is “bigger, more advanced and comes with a domestically made mobile launcher that will make it harder than ever to preemptively destroy,” AP reported.

Should we be concerned? AP quoted one “leading missile expert,” Michael Elleman, who doubts the weapon has the advertised range if it is carrying a nuclear payload—greater weight means shorter distance. “Kim Jong-un’s nuclear bomb must weigh less than 350 kilograms [800 pounds] if he expects to strike the western edges of the U.S. mainland,” Elleman said. “A 600-kilogram payload barely reaches Seattle.”

Apparently this passes for good news these days: Well, at least North Korea will only be able to nuke Seattle!

As Stephen Flurry brought out in yesterday’s Trumpet Daily Radio Show and Richard Palmer detailed on a blog post at theTrumpet.com today, many analysts are saying we just need to accept that North Korea is now a nuclear state. Anything to be concerned about there?

Richard linked to a National Interest article saying that this milestone represents the failure of Donald Trump’s provocative approach. Clearly the U.S. president’s “fire and fury” remarks haven’t slowed North Korea down. What we really need, apparently, is diplomacy. “What today’s missile test does highlight is the fact that Washington must find a diplomatic solution to this crisis,” the National Interest’s Dave Majumdar wrote.

Majumdar’s article quoted two “experts” in arms control and disarmament. Kingston Reif, director for disarmament and threat-reduction policy at the Arms Control Association, said this: “North Korea’s progress speaks to the urgent need to marry continued economic pressure on North Korea with pursuit of diplomatic off ramps—without preconditions—aimed at reducing tensions and freezing Pyongyang’s long-range missile and nuclear testing.” Yes, all we need is “economic pressure” and “diplomatic off ramps,” and we can bring North Korea to heel! Never mind that we have been using these tools for the last three decades! Never mind that all the evidence shows that they have failed miserably, and that negotiation with Kim Jong-un is a farce.

What would it take to convince this man that these strategies are fruitless? Presumably even a North Korean nuclear attack would just prove that we failed to provide enough “diplomatic off ramps”!

Mr. Majumdar’s second “expert,” Joseph Cirincione, president of the Ploughshares Fund, seems to think this latest missile test is actually cause for hope. Because it effectively means Kim Jong-un now has full nuclear capability, it could make him more open to diplomacy!

Is it possible to be more delusional? How does this dictator achieving the capacity to level any American city of his choosing improve our chances of successfully negotiating an end to the threat?

If this passes for enlightened diplomatic thought in America today, it’s little wonder God prophesies that very soon “the ambassadors of peace shall weep bitterly” (Isaiah 33:7).

One might take solace in the fact that these are merely the thoughts of private citizens—the defense editor of a prestigious international affairs journal and a couple of officials at advisory organizations. But despite the bluster coming from the White House, just watch to see if anything substantially different is actually done about North Korea’s provocations.

The story about Russia buying the company Uranium One is just as outrageous. Listen to my interview on yesterday’s Trumpet Hour with Andrew Miiller about it. Between 2009 and 2013, Russia progressively bought this Canada-based company—which controls about one fifth of America’s uranium production capacity. Since uranium can pose an obvious threat to national security, nine U.S. government agencies had to approve this deal—including the State Department, under Hillary Clinton at the time. They all signed off on Russia buying this company. After all, what’s to worry about Russia’s state-run nuclear agency owning a company that controls large amounts of uranium in Canada, Australia, South Africa, the U.S. and Kazakhstan?

Now, Uranium One is a wholly owned subsidiary of the Russian state corporation Rosatom. And as Andrew wrote on theTrumpet.com earlier this week, “Iran is now seeking to buy uranium ore from Kazakhstan and expects Russia’s nuclear energy agency will help it produce nuclear fuel. Russia has been a big supporter of Iran’s nuclear program in the past. The U.S. government could have stopped Russia from gaining control of Uranium One’s Kazakh mines. But the Obama administration decided not to.”

Why is this in the news now? Because of revelations that Russia had given money to Clinton’s foundation in a possible quid pro quo for approving the Uranium One purchase. Another internal investigation over a corruption scandal among what seems like an endless number of them going on right now.

But what about the bigger issue of America—not just one corrupt cabinet member, but nine agencies—effectively entrusting Russia with ownership over part of America’s uranium production and control over uranium mines in Kazakhstan? Is anyone concerned about this? Russia is known to have uncomfortably close ties with nuclear-ambitious Iran. Just this week, a senior Iranian leader said it was ready to upgrade its missiles to strike Europe.

Everywhere you look, the threats in today’s world are multiplying and intensifying. But how many people are even paying attention?

In America we are too wrapped up in sex scandals to concern ourselves with trivialities like enemies gaining the capacity to nuke our cities.

In that National Interest article, Mr. Circincione made this observation about the timing of North Korea’s missile test: “[T]hey certainly timed this well. They watch the United States very closely, and whether intentional or not, they tested at a time when the president is wrapped up in domestic politics, limiting his ability to respond” (emphasis added).

The reality is, they don’t have to watch too closely and timing such a test takes no special genius. America’s ability to respond is handicapped by an endless parade of nonsense, bickering, partisanship, division, self-loathing and doubt. Read the first chapter of Isaiah, where God chastises America for being a “sinful nation, a people laden with iniquity,” whose “whole head is sick, and the whole heart faint,” filled with wounds top to bottom (Isaiah 1:4-6). God asks, “Why will you still be struck down? Why will you continue to rebel?” almost as if incredulous at our stupidity (verse 5; English Standard Version).

If people are even paying attention enough to see what is happening, we are too dense to recognize these problems as curses on our nation—let alone have the humility to change course.

Watching this happening, it is abundantly clear why, again, as Mr. Flurry’s booklet says, Nuclear Armageddon Is ‘At the Door’!