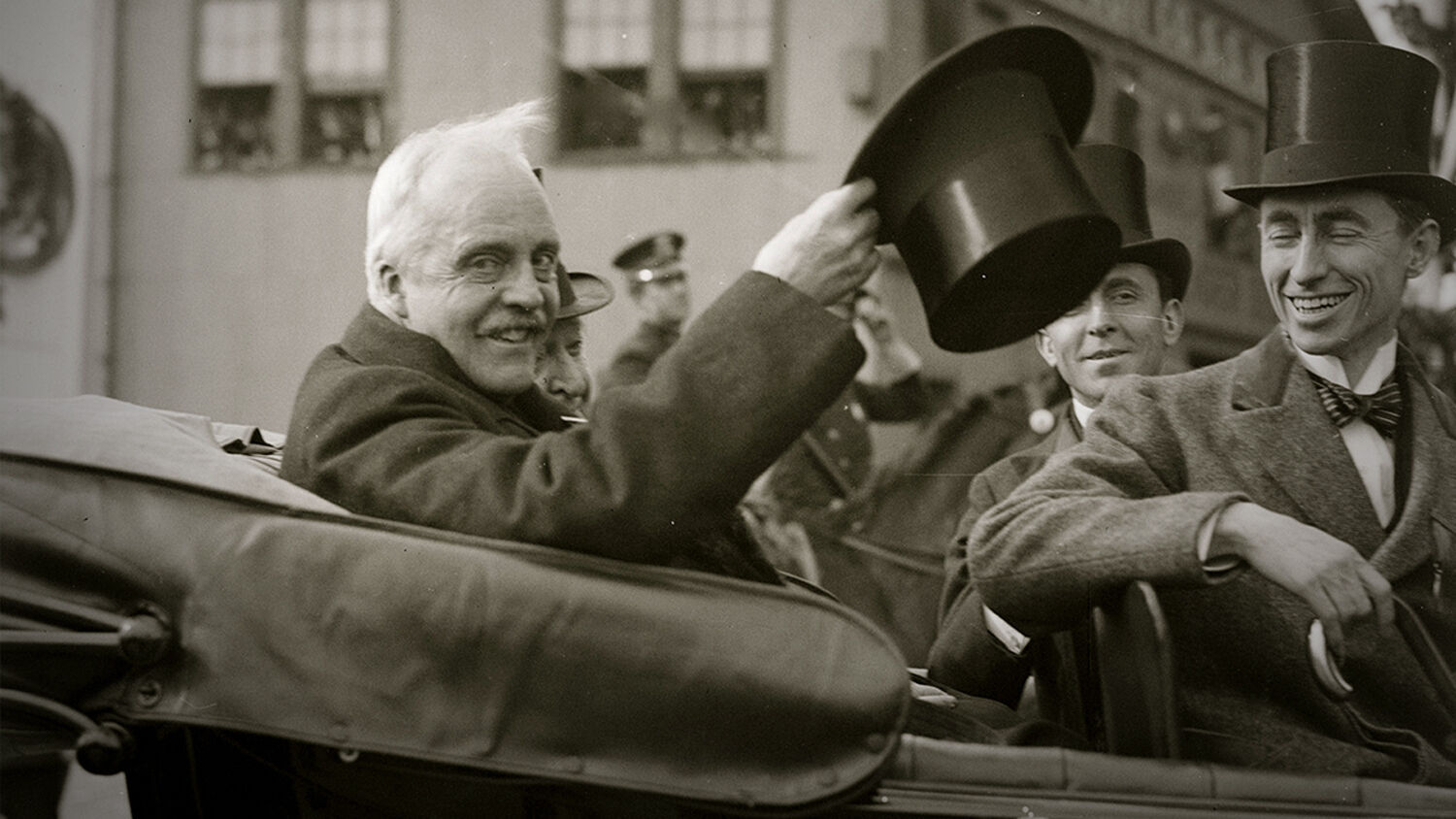 It happened 100 years ago today. On Nov. 2, 1917, United Kingdom Foreign Secretary Arthur Balfour sent a letter to Lord Walter Rothschild. The letter contained a declaration of British support for a Jewish state. It read as follows:

I have much pleasure in conveying to you, on behalf of His Majesty’s government, the following declaration of sympathy with Jewish Zionist aspirations which has been submitted to and approved by the cabinet.

“His Majesty’s government view with favor the establishment in Palestine of a national home for the Jewish people and will use their best endeavors to facilitate the achievement of this object. It being clearly understood that nothing shall be done which may prejudice the civil and religious rights of existing non-Jewish communities in Palestine or the rights and political status enjoyed by Jews in any other country.”

I should be grateful if you would bring this declaration to the knowledge of the Zionist Federation.

The letter was a major victory for a Zionist movement determined to establish a home in the Middle East. Many celebrated the declaration as the first step toward statehood. Some claimed—and some still claim—that the letter heralded the regathering of Israel that was prophesied in the Bible.

The regathering is a pillar of the Zionist cause. It is enshrined in the constitution: “The State of Israel will be open for Jewish immigration and for the ingathering of the exiles.” But it is not only a Jewish belief. Many sects and denominations of modern “Christianity” also believe the current State of Israel is the fulfillment of prophecy in Isaiah 43 and elsewhere. Some, such as the Mormons, believe that the ingathering must come about before the return of Jesus Christ.

In his book Conflict & Connection: The Jewish-Christian-Israel Triangle, Moshe Aumann wrote that American Evangelicals “understood all of these developments as nothing less than the wondrous fulfillment of biblical prophecy.” Yet others say Christ Himself must gather Israel after He returns.

What is the answer? Was the Balfour Declaration the start of an incredible fulfillment of Bible prophecy?

After struggling to maintain order for 25 years, Britain ended its mandate on May 15, 1948. On the same day, the Jews in Palestine declared themselves a nation and set up the republic named “Israel.” Twenty minutes later, the United States announced its recognition of the state.

By dawn, May 15, Arab forces were bombing Tel Aviv, and their armies marched against Jerusalem.

NOT the Prophesied Regathering of Israel

In June of the same year, Herbert W. Armstrong, the founder of the Plain Truth—predecessor to the Trumpet—wrote the following: “Thus while Jews in America prayed for the peace of Palestine, the proclamation of ‘the Jewish nation Israel’ was a signal for war between that nation and surrounding Arab nations. There was no ushering in of peace.”

Mr. Armstrong went on to explain that this was not the prophesied regathering. Rather, it was “merely a blundering human effort to do for themselves, before the time, what they will have to wait for God to do for them.” He continued, “And this present movement, setting up a nation of Jews and calling it ‘Israel,’ can only lead to more bloodshed and more troubles!”

One hundred years of bloodshed back that prediction up! While many Jews have come to Israel, it has not been a peaceful ingathering!

World Zionist Organization founder Theodor Herzl once said, “The Jews who wish for a state will have it. We shall live at last as free men on our own soil, and die peacefully in our own homes.” But times of peace have been scarce.

Does the Bible support Mr. Armstrong’s claim, and that of the Trumpet? Is the regathering still ahead? If it has already happened, why is there no peace? If it is still to come, when will it come?

To understand, we must first look to Israel’s identity. Did you know that the modern nation of Israel is not all biblical Israel? It is, in fact, just part of the nation of Israel found in the Bible. The united kingdom of ancient Israel under King David and King Solomon actually split into two kingdoms: one was under the descendants of David and Solomon (the kingdom of Judah), one was not (the kingdom of Israel). In fact, the first instance of the term “Jew” in the Bible is found in 2 Kings 16:6 in a description of the Jews warring against Israel. These were two separate, distinct nations!

As Mr. Armstrong said, four whole books of the Bible are devoted to showing the historic difference between Israel and Judah. After the reign of Solomon, the nation of Israel divided. To the north was the kingdom of Israel; to the south was the kingdom of Judah—whose descendants inhabit the nation of Israel today. Our free book The United States and Britain in Prophecy explains this in detail.

God promised that the great exodus back to the land would consist of all “Israel,” not just those of the tribe of Judah!

Then there is also the question of how Israel returns. The Bible records that Israel will be brought back by Christ after His Second Coming (Jeremiah 23:7-8). Notice that they do not come back on their own. Before that return, they are slaves in the lands of their enemies (Ezekiel 39:25-27). This has not happened yet!

In a June 1948 Plain Truth article, Mr. Armstrong referenced Jeremiah 50:4-5, Ezekiel 20:34-43, Jeremiah 50:19-20 and Ezekiel 36:24-25 as prophecies that are critical to the fulfillment of the regathering. Since these prophecies have not been fulfilled, the regathering must not have occurred yet. It must be yet ahead!

The Balfour Declaration was not the start of the regathering. But that does not make it insignificant. After all, prophecies state that half of Jerusalem must be taken from the Jews at the start of the Great Tribulation. That means the city must be under Jewish control beforehand!

British Prime Minister Theresa May called the Balfour Declaration “one of the most important letters in history.” There may be some truth to that claim. It was the start of many Jews returning to the Middle East. It was a step toward the regathering of Israel—but not in 1917 and not in 1948!

That regathering is about to come. But the Bible speaks of the fulfillment of some horrific prophecies beforehand. Our booklet Jerusalem in Prophecy explains what will happen to the Jewish nation. Notice what author and Trumpet editor in chief Gerald Flurry writes:

Three great religions—Christianity, Judaism and Islam—all have an intense interest in Jerusalem. That city is the third-most holy site to the Muslims. It is the most holy city for the Jews. Christians consider it their first or second holiest city. In the end, it is going to bring disaster to all three religions. “And in that day will I make Jerusalem a burdensome stone for all people: all that burden themselves with it shall be cut in pieces, though all the people of the earth be gathered together against it” (Zechariah 12:3). Even the United Nations is burdened down with Jerusalem. Those nations that burden themselves with that city will be “cut in pieces.” Instead of trusting God for a solution, they trust men.

One hundred years on from the Balfour Declaration, we can see what happens when men trust in men. But notice! Israel’s fate does not end in the Great Tribulation. Mr. Flurry continues:

Because of its past and future, Christ has more interest in that city than in any other city on Earth. Christ died in Jerusalem. He and His Father are going to rule the Earth and the universe from there!

God will choose Jerusalem again. At the return of Christ, there will be a regathering of Israel. Men have tried to bring it about early and failed miserably.

The Balfour Declaration was a critical moment in Israel’s history. Yet it pales in comparison to the glorious future Christ will usher in. In 1917, Britain threw its support behind Israel, but God says He will “yet choose Jerusalem” (Zechariah 1:7). In Jerusalem in Prophecy, Mr. Flurry writes, “The whole universe will be ruled from Jerusalem. [And all Israel will be there.] When God chooses a city, expect it to be spectacular beyond anything man can even imagine!”