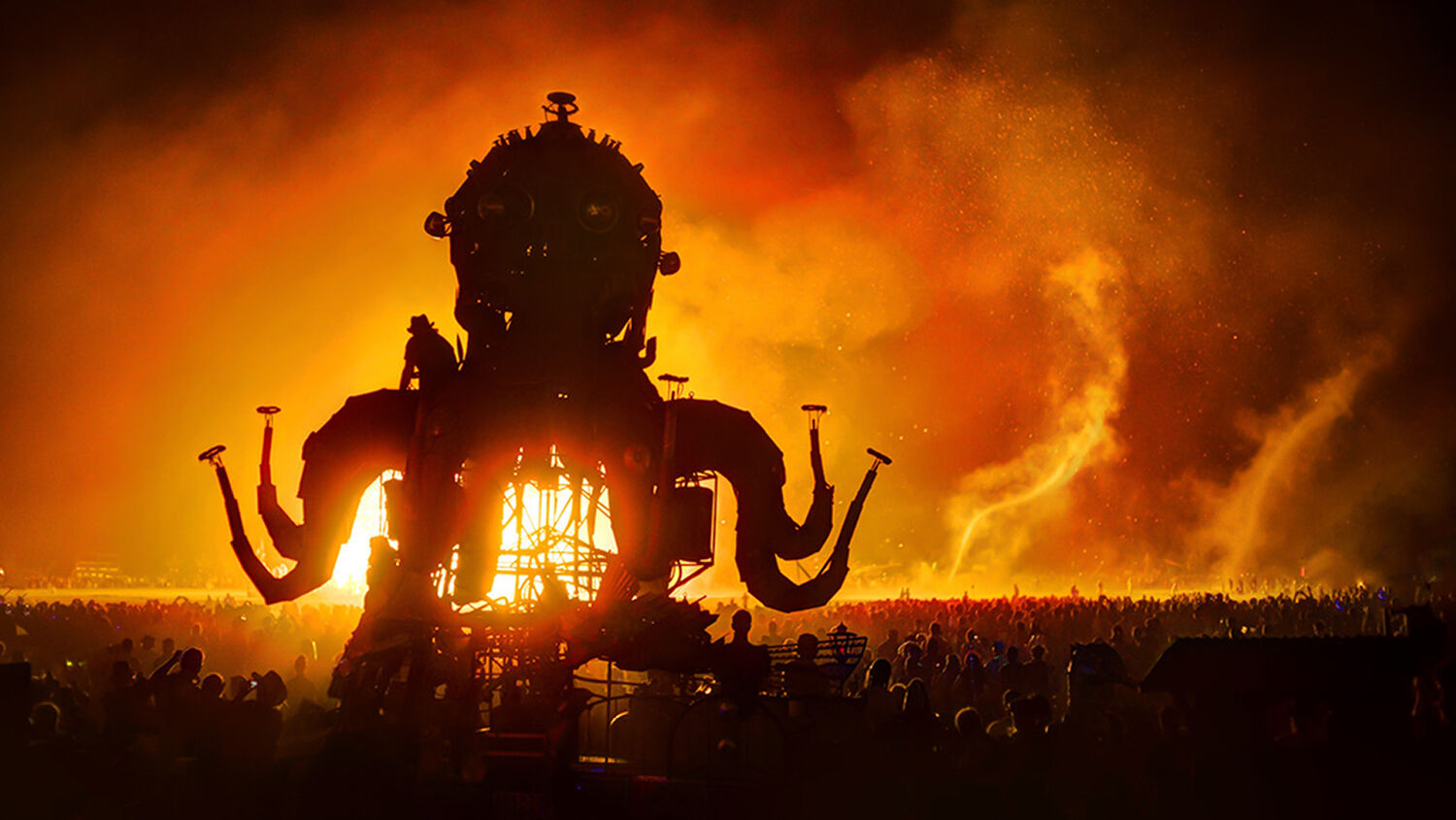 Thousands flock to the Nevada desert for the annual hedonistic counterculture festival known as Burning Man, even as torrential rains flood the streets of Houston.

Masses of bodies under a bright, desert sun. Drugs and debauchery on an unheard-of scale. Wild hallucinogen-fueled raves. Such scenes might bring to mind depraved parties from the days of ancient Rome. Yet deep in the Black Rock Desert of Nevada, a bacchanalia of immense proportions spread across the desert floor from August 27 to September 4. This carnal festival is known as Burning Man.

Styled as a temporary counterculture “community” by its organizers, Burning Man draws thousands every year to participate in a weeklong, “anything goes” experience.

The event’s organizers describe this annual phenomenon as an “experiment in temporary community dedicated to radical self-expression and radical self-reliance.” This does not give people an accurate sense of what really goes on at Burning Man.

Meanwhile, as such immorality grows within the U.S. grows, so does the intensity and frequency of its natural disasters.

Houston will be recovering from the devastation caused by Hurricane Harvey for a long time to come. The Caribbean is being pounded by Hurricane Irma, and Florida is bracing itself for the monster storm. Some commentators are using these events as a political platform to once again promote their global-warming agenda.

But if you believe the Bible, we should be looking at society’s increasing immorality to see the real cause of these weather disasters.

Burning Man was the subject of our Trumpet Brief e-mail last Friday. In it, Trumpet executive editor Stephen Flurry wrote:

Even those who do not personally attend this pagan festivity “have pleasure in them that do” (Romans 1:32).

God is not pleased. He has blasted this year’s Burning Man with scorching heat and driving dust storms that forced organizers to temporarily close the main gates to the event. On Sunday, a lightning bolt from heaven ignited a massive wildfire in northwest Nevada. The raging inferno charred about 30,000 acres and forced state officials to temporarily close the main highway that leads from Reno to Burning Man.

On Thursday, Nevada’s Bureau of Land Management declared Burning Man to be a “major safety concern,” saying that wildfires could potentially reach the event area. But except for a few “burners” inconvenienced by the road closing on Tuesday night, the festival appears to have continued uninterrupted.

What a nauseating spectacle! God is desperately trying to get our attention with weather upsets, “natural” disasters, national tragedies, etc, and we party on as if there is no connection between curses from God and our sin-drenched way of life! But the Bible specifically recorded and preserved for thousands of years the history of what happened to a large group of people who engaged in the types of “lifestyles” that those in Nevada have been practicing. They lived in two cities called Sodom and Gomorrah. And God’s response wasn’t fire from the northwest, but fire from the sky.

God is real, and He does care about what we are doing!

Read what God says in Amos 4:7-8. He causes oppressive drought in one region and torrential rain in another. Why? Because we won’t turn to Him. In other words, extreme weather upsets are a direct result of transgressing God’s laws. Moses proclaimed the same warning in Deuteronomy 28:22-23. And in the New Testament, Jesus Christ specifically said that His Second Coming would be preceded by an increase in the frequency and intensity of earthquakes and storms in many different places (Matthew 24:6-7).

There is a reason “once-in-a-century” disasters keep pounding the United States. God is punishing us for sin. He wants us to turn to Him!

You know, it wasn’t even that long ago when most of our people acknowledged an all-powerful God who controls the weather. But today we have forgotten God. We don’t believe He controls the weather anymore. And we certainly don’t connect the way we live to the consequences we experience—whether good or bad.

For this reason, the Bible forecast is for more “natural” disasters—many more—even worse than what we have experienced this past week.

Upon this mixed-up society that can no longer tell the difference between right and wrong, God is sending these curses down on the whole country. The spirit of Burning Man pervades the United States, and the nation suffers as a result.

Keep in mind that God does not punish out of spite, but out of love. The sinful ways of this world do not bring true happiness. Peace and joy can only come from living according to God’s way of life (Deuteronomy 30:19-20).

If the people of America wish to live free from fear of hurricanes and other natural disasters, they need to start obeying God. “If my people, which are called by my name, shall humble themselves, and pray, and seek my face, and turn from their wicked ways; then will I hear from heaven, and will forgive their sin, and will heal their land” (2 Chronicles 7:14).

For a deeper look into this subject, read our free booklet Why ‘Natural’ Disasters?