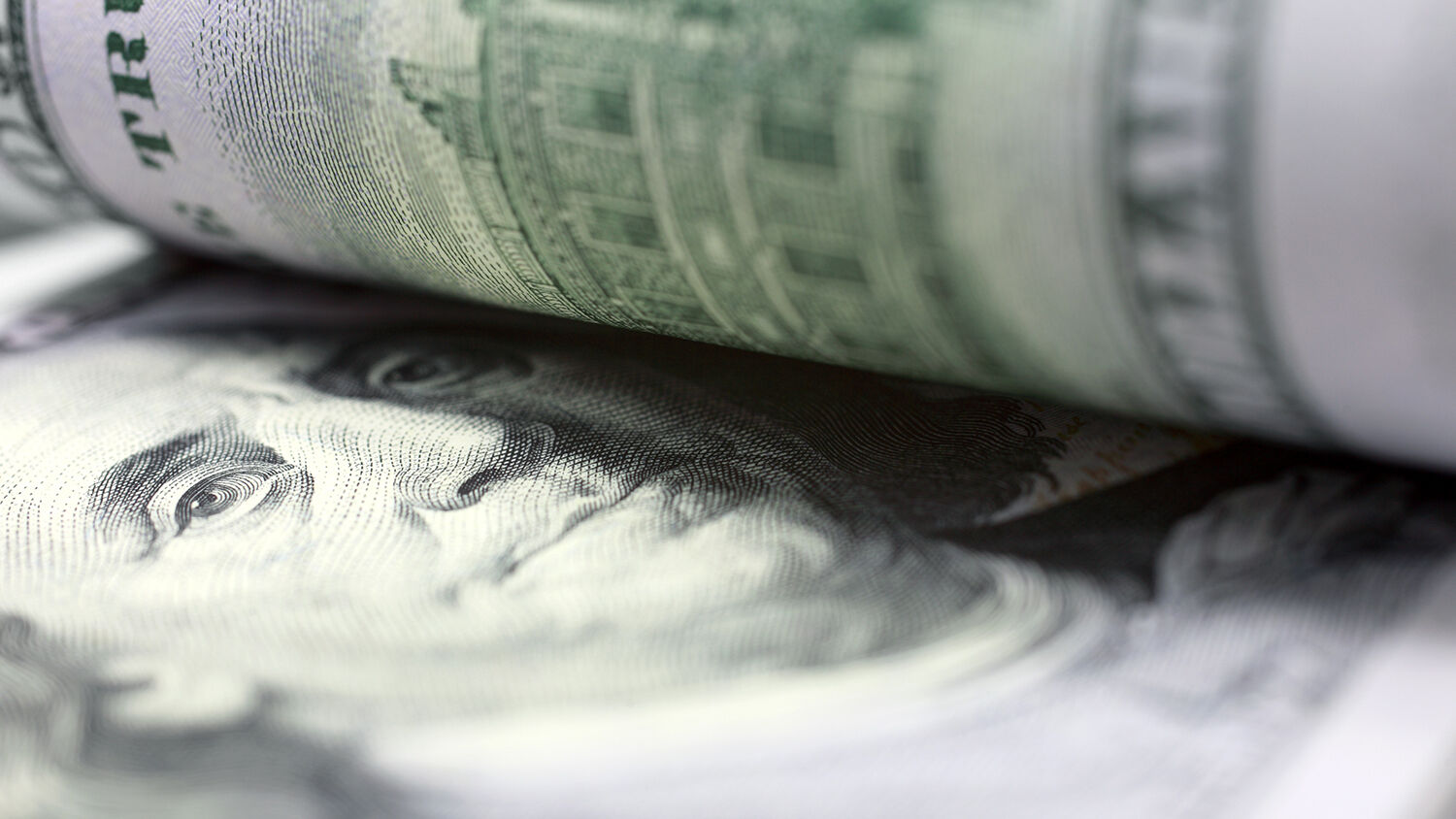 If only you had a little more money—you would likely still have the same problems.

It’s easy to think that if you had more money, you would have fewer problems. Whether you are an individual, a spouse, a parent or a politician, chances are that much of the energy you expend to overcome your struggles goes toward generating more money. Even goals like obtaining a better education are often ultimately aimed at earning more income. The government of the United States is especially prone to combat national problems by spending more money on them. But what if our problems come not from financial shortfalls, but moral ones?

The overwhelming number of children born out of wedlock is one of the most obvious examples showing that our worst problems are moral, not economic.

Women who have children outside of marriage are more likely to have lower incomes and lower education levels and more likely to depend on welfare assistance compared with married mothers. Both the child and the mother are less likely to do well in school and in life. That is a harsh reality.

And that reality is even harsher for specific groups. Among African-Americans, the number of children born to unmarried mothers is 71 percent.

This growing problem of births to unmarried mothers is not a surprise; it has been more than 50 years in the making. Back during President Lyndon Johnson’s “War on Poverty,” it was well known that African-American families were struggling with these financial, educational and employment issues. In 1965, sociologist and Assistant Secretary of Labor Daniel Moynihan published a report on African-American families. The report argued that civil rights legislation was not enough to lead to racial equality. It defined equality as “a distribution of achievements among Negroes roughly comparable to that among whites.”

The report noted that a century after slavery had been abolished, black women were in skilled jobs at roughly the same percentage as white women. Yet black men lagged significantly behind.

This report supported the ideology that the government should become more and more involved in individuals’ lives to establish racial equality. Yet civil rights activists and others who supported increased government intervention criticized Moynihan’s report.

The report even questioned whether government employment programs for African-Americans actually worsened their situations because black women were able to take advantage of the job opportunities more than black men. From a financial standpoint, the increased income in these households should have equated to increased social and economic status. Yet the report found that because the women were more steadily employed than the men, the family structure was weaker.

The authors of the report said that the government needed to understand that upside-down family patterns made it harder for African-American men to lead their families and worsened the exact same social and economic problems the government was trying to solve in the first place.

But left-wing critics blasted the report for “blaming the victim” and for emphasizing the importance of family structure. The Johnson administration disowned Moynihan’s report.

It was easier to view the problem in economic terms than in terms of families. As a result, “War on Poverty” poured money into programs for job training and those aimed at providing children with the emotional, mental and social help that stable, two-parent families traditionally provide.

But treating the effects never solves the problem. It’s no surprise that 50 years later the U.S. is still dealing with the same problems today. What is different today, though, is who the problem affects.

In the 1960s, when births to unmarried mothers were far fewer, those who suffered were mostly African-Americans and poor people. The teenage mother living with her mom was the typical pattern. But today, when 2 out of every 5 children do not have a married father and mother, another group is involved—white women.

In 1980, 9.5 percent of births to white women occurred outside of marriage. By 2014, that number had more than tripled at 29 percent. That’s a big change, and it’s not just a problem for the poor and uneducated.

The majority of out-of-wedlock births now belong to parents who live together but are not married. In 2002, 40 percent of all American out-of-wedlock births were to cohabiting parents. That figure has now risen to 58 percent. Many of these unmarried women are in their mid-20s, have some college education, and are living with the father of their child. From a financial point of view, it would seem that the children of cohabiting parents would have about the same advantages as the children of married parents. But this is not the case.

It may seem that cohabiting parents who share a child are more likely to become married. But the data shows that after five years of cohabiting, only a third of these parents remain together. Most cohabiting couples separate, find new partners, and have other children.

The problems of children born outside of marriage are multiplying and spreading beyond the poor and the uneducated—and across races.

As the children and grandchildren of the 1960s generation now attempt to solve the social and economic problems of children born outside of marriage, once again there is a debate between those who want to solve these problems using economics and those who want to solve these problems using family virtues. Liberals favor an approach that uses economics and government intervention. They focus on economic opportunity as the key to better futures for these children. Some say that one of the main problems is that men with high school diplomas used to be able to get factory jobs that paid a good wage, but those jobs have been outsourced to other countries or automated. They theorize that because fewer white men have well-paying jobs, fewer women want to marry them.

From a statistical point of view, the logic appears sound. Women certainly factor career prospects and stable income into their marriage choices.

Yet this reasoning is flawed because it reduces the family to a purely economic arrangement.

A University of Maryland study by economist Melissa Kearney and Riley Wilson proves this. The study, “Male Earnings, Marriageable Men, and Non-Marital Fertility: Evidence From the Fracking Boom,” uses the fracking boom to test the theory that the lack of good jobs for less-educated men was contributing the spike in unmarried births. It looked at the oil and natural gas boom areas in Pennsylvania, Oklahoma, Texas, Ohio, West Virginia and Texas. (The study excluded the boom in North Dakota and other areas where the population experienced a large migration of workers.)

In the 2010s, the average American is at best uncertain or confused about the role of the father and the importance of family.

The Bible says, “My people are destroyed for lack of knowledge: because thou hast rejected knowledge, I will also reject thee, … I will also forget thy children” (Hosea 4:6). A look at the unmarried births in our society shows that this curse is real.

This isn’t talking about knowledge from a sociological experiment. This is the knowledge that can only come from God. It includes knowledge about the purpose and importance of family revealed in the Bible. Rejecting godly knowledge about family leads to devastating consequences.

Sociologists view family merely as an arrangement to pool resources and divide responsibilities. They believe this institution was invented by humans for purposes of economic efficiency. This evolution-based perspective logically leads to solving economic problems with economic solutions, since it considers family itself to be a mere economic arrangement. It denies that the family has any special purpose beyond this—and certainly denies that it has any spiritual purpose. When viewed this way, it is logical for people to enter other arrangements that they consider to be more expedient.

John 1:1 says: “In the beginning was the Word and the Word was with God, and the Word was God.” Then verse 14 says: “And the Word was made flesh, and dwelt among us, (and we beheld his glory, the glory as of the only begotten of the Father,) full of grace and truth.” This is talking about Jesus Christ, a God Being who became a human begotten by God the Father.

Mr. Armstrong explained these verses in The Incredible Human Potential:

The Father, from heaven, said of Jesus, “Thou art my beloved Son, in whom I am well pleased.” Jesus, praying, called God “Father”—Father and Son—a family relationship. The Church, at the resurrection to immortal spirit life, is to marry the resurrected and glorified Christ (Ephesians 5:25-28). So we have here a family relationship—father, son, husband and wife. And the “wife” is to be composed of born children of God.

Most people will talk about God the Father and Christ His Son but never actually admit that they are saying God is a family. Instead, they believe God is a “trinity,” limited to three beings. But the Bible shows that God is actually opening up the family to all mankind! (Request The Incredible Human Potential for a free, in-depth study of this.)

Mr. Armstrong preached this knowledge, but few listened. And what little knowledge Americans had about the importance of family was rejected. The criticism leveled against the 1960 report’s focus on family grew louder and louder.

Today, anyone upholding the values of traditional family is mocked and ignored. Even as it is clear you can’t solve family problems by ignoring the family.

Why are such intelligent people so blind to the basic and obvious?

The Bible explains this too. The Bible speaks of an arch deceiver, Satan the devil, a spirit being with tremendous power. The Bible says Satan is “the prince of the power of the air, the spirit that now worketh in the children of disobedience” (Ephesians 2:2).

This is the only thing that can explain such willful ignorance in looking at the data. The whole world is deceived. That comes from the Bible. It is not an assumption or theory—it is reality.

The Bible says of Satan, “When he speaketh a lie, he speaketh of his own: for he is a liar, and the father of it.” He is the father of the lie that society can promote structures other than traditional family and not suffer for it.

When government, education and media reject the importance of traditional family and ignore the results, they are embracing a lie and, worse, they are broadcasting it to society.

Revelation 12:9 speaks of Satan being cast down. It is interesting to note that the trend of more children being born out of wedlock started to take off in the 1980s. In 1980, only 18 percent of children were born to unmarried mothers, so the percentage of children born out of wedlock has more than doubled since then. That was during a time when women gained more access to contraceptives and abortion!

This coincides with the time frame of the event spoken of in Revelation. (For a full explanation, request Gerald Flurry’s free booklet America Under Attack.) Satan is working his deceit, and a large part of that is in undermining and attacking family.

But the Bible can clear the deception away. You don’t need a sociologist to tell you what the Bible already reveals. It’s the only source of information that gives the purpose of family and how to build a family. Herbert W. Armstrong’s free book The Incredible Human Potential puts the Bible answer together in an easy-to-understand way.

Sociologists, government officials and educators reject the evidence, but you don’t have to! If you are unclear on why there is family and are willing to accept the results of these studies, order our free literature to learn the real solution to this problem.