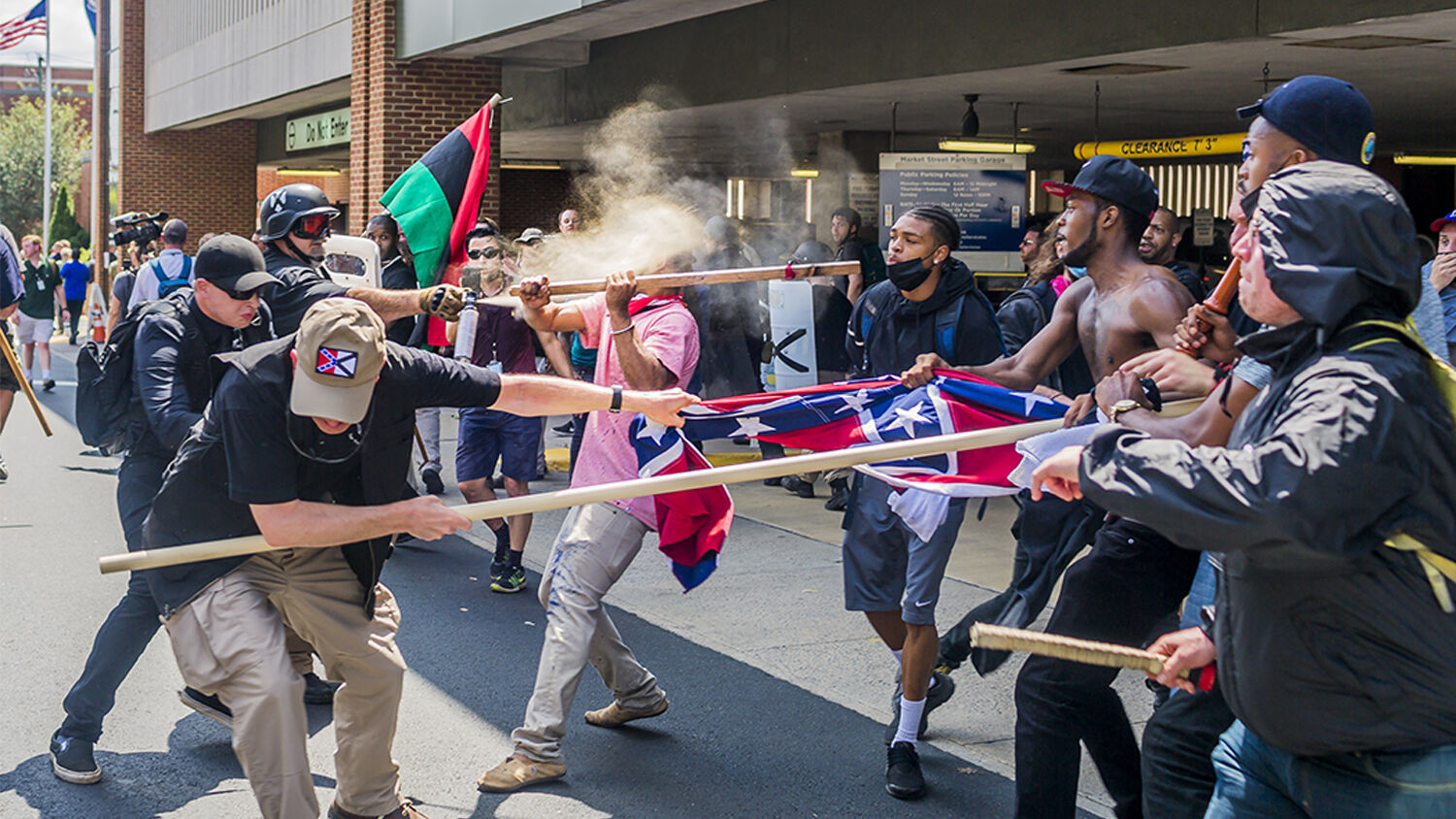 The neo-Nazi and Marxist revolutionaries that faced off in Charlottesville have more in common than they would like to admit.

One person was killed and 35 were injured during street brawls in Charlottesville, Virginia, over the weekend. These brawls started after a few dozen white nationalists marched through the University of Virginia campus on Friday night, protesting a city plan to remove a statue of Confederate General Robert E. Lee. When this group encountered a group of counterprotesters at a statue of university founder Thomas Jefferson, a fight broke out that resulted in protesters from both sides spraying each other with pepper spray.

Police arrived and ordered the crowds to disperse, arresting at least one person. Yet the violence only worsened the next day.

Approximately 500 white supremacists gathered at Emancipation Park on Saturday for an event dubbed the “Unite the Right” rally. Multiple white-power groups sent representatives, including the Ku Klux Klan, the League of the South, the National Socialist Movement, the Traditionalist Workers Party and Vanguard America. Many waved Nazi flags and chanted Nazi-era slogans such as “Blood and Soil.” Others waved banners with slogans such as “the Jewish media is going down” and “Jews are Satan’s children.”

Among the approximately 1,000 counterprotesters who showed up to oppose the Unite the Right rally were representatives of several Marxist organizations, including Antifa, Black Lives Matter and the Democratic Socialists of America. By 11 a.m., Emancipation Park descended into violence as both protesters and counterprotesters taunted, shoved, clubbed and pepper-sprayed each other. It is still unknown whether the fascists or the Marxists started the fight, but more than a dozen people were injured in the street brawl.

After Virginia State Police declared the gathering an unlawful assembly around 11:40 a.m., riot police cleared the scene. But many of the protesters just moved to nearby McIntire Park.

During this spin-off rally, someone drove a car into a crowd of counterprotesters, killing one person, Heather D. Heyer, and injuring 19 others in what was apparently a deliberate attack. James Alex Fields Jr. is being held on charges related to the crash. According to Field’s high school history teacher, he was fascinated with Nazism and admired Adolf Hitler.

President Donald Trump condemned these horrific acts of violence in an official press statement on Saturday, saying that “the hate and the division must stop, and must stop right now. We have to come together as Americans with love for our nation and … true affection for each other. We condemn in the strongest possible terms this egregious display of hatred, bigotry and violence on many sides, on many sides.”

The sight of neo-Nazis fighting with Marxists evokes images of Weimar Germany. During the 14-year period preceding Hitler’s appointment as chancellor of Germany, street brawls between fascists and Communists were common throughout Germany. These brawls did not stop until Germany became a full-blown dictatorship.

There are about 6,000 Ku Klux Klan members in the United States, and probably less than 10,000 Americans are associated with neo-Nazi groups. The Flat Earth Society has more members than the National Alliance, the nation’s largest neo-Nazi organization.

But this tiny group can cause a major problem. The main threat posed by these bloody street brawls is that fascists and Marxists might use their supposed “victimhood” status to divide Americans into warring camps.

“Let’s get something out of the way,” wrote John Daniel Davidson for the Federalist. “Charlottesville is not about Confederate statues or Robert E. Lee or the Civil War or American history. What happened on Friday night and Saturday is about power, specifically about forcing the great mass of Americans to choose sides in a zero-sum clash between contemporary American versions of Weimar gangs.”

Mainstream media outlets are buying into a narrative that conflates white supremacy with constitutional conservatism. By projecting the authoritarian racism of a fringe movement onto libertarians and mainstream conservatives, they are encouraging left-wing terrorist organizations like Antifa to attack conservative speakers at universities across the nation. If this continues, it won’t be long before people start fighting back.

Nazism—which stands for National Socialism—is the combination of xenophobic nationalism with authoritarian socialism.

Like other socialists, neo-Nazis abandon principles of individual liberty and maintain power by pitting their social group against a hated enemy. Black Lives Matter, a Castroite organization, pits blacks against law enforcement. Democratic Socialists of America, a Maoist organization, pits the poor against the economically successful. Fascist organizations like Vanguard America pit whites against Jews and other races.

The end result: anarchy and street brawls like those America witnessed this past weekend.

The Bible explains that God “hath made of one blood all nations of men for to dwell on the face of the earth, and hath determined the times before appointed, and the bound of their habitation” (Acts 17:26). God considers hatred comparable to murder, and views all hostility of one race against another as contemptible (1 John 3:15). The Bible also foretold that there would be serious race problems in the end time due to the sins of the American and British peoples (Isaiah 1:7). God does not put the primary blame on a political leader the way so many political commentators do. In the end, these nation-destroying problems are actually correction from God to help people see their sins and repent of them.

To understand the awe-inspiring end to all of these terrifying problems, study Trumpet editor in chief Gerald Flurry’s booklet Great Again.