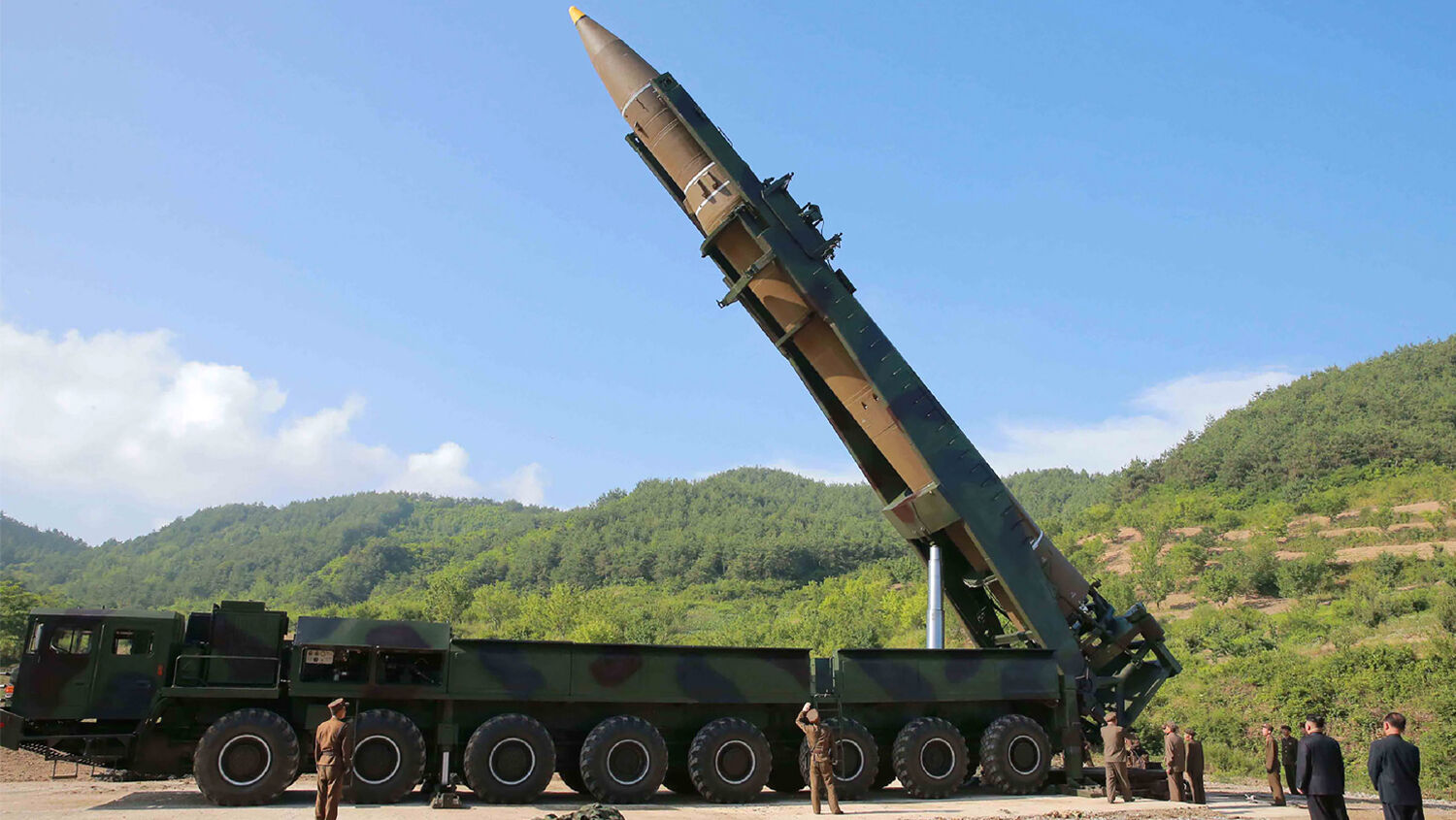 North Korea’s intercontinental ballistic missiles are much more dangerous than the media is reporting.

A crazy regime proved on July 4 that it can reach the United States with a missile capable of carrying nuclear weapons.

Yeah, I know about that, you may be thinking. That’s old news.

But now there is evidence that North Korea is getting ready to launch a second intercontinental ballistic missile. This is now normal. But it shouldn’t be. North Korea’s nuclear weapons program is more than an average news story—all but forgotten after a few days.

There is real danger for the U.S. and nations around the world.

Instead of highlighting the danger, much of the news media has been feeding Americans with excuses—telling them that all is fine, and there is no need to worry.

Nuclear experts are not so relaxed.

When you look beyond newspaper articles and at what the actual experts are saying, a far more disturbing picture emerges. Let’s consider some claims made about North Korea’s nuclear program and the truth behind them.

Firing a missile 4,000 miles is one thing. Shrinking a nuclear bomb onto a missile and making it robust enough to sit on top of a rocket for 4,000 miles is different. North Korea may have nuclear weapons, and it may have long-range missiles, but it is still a long way from fitting the nuke on the missile.

Or so the claim goes. Like almost all of these claims, there is some truth: Miniaturizing a nuke isn’t easy. But Jeffrey Lewis, director of the East Asia Nonproliferation Program at the Middlebury Institute of International Studies in Monterey, California, and contributor to Foreign Policy isn’t so relaxed. He told Bloomberg News:

I don’t have any doubt that North Korea has a compact fission device that fits on a ballistic missile. North Korea has conducted five nuclear tests—and if we look at the other nuclear powers, after five nuclear tests they were all capable of building compact nuclear weapons and/or well on their way to thermonuclear weapons. To go back to my point about China, the U.S. expressed the same skepticism about whether China could make a compact device small enough to fit on a missile. The Chinese responded by altering their nuclear test schedule so that their fourth nuclear test, in 1966, was a test of a live nuclear warhead on a real missile, which they fired across their country. The Chinese made their point. I hope the North Koreans doesn’t feel the need to do something similar and fly a nuclear-armed missile over Japan.

Former cia director Ambassador R. James Woolsey and Dr. Peter Vincent Pry, a former cia employee who is now chief of staff of the Congressional emp Commission, gave a similar warning in March in a blog post for The Hill:

The mainstream media, and some officials who should know better, continue to allege North Korea does not yet have capability to deliver on its repeated threats to strike the U.S. with nuclear weapons. False reassurance is given to the American people that North Korea has not “demonstrated” that it can miniaturize a nuclear warhead small enough for missile delivery, or build a reentry vehicle for an intercontinental ballistic missile (icbm) capable of penetrating the atmosphere to blast a U.S. city.

Yet any nation that has built nuclear weapons and long-range missiles, as North Korea has done, can easily overcome the relatively much simpler technological challenge of warhead miniaturization and reentry vehicle design.

Indeed, North Korean dictator Kim Jong-un has been photographed posing with what appears to be a genuine miniaturized nuclear warhead for ballistic missiles. And North Korea does, in fact, have two classes of icbms—the road mobile KN-08 and KN-14—which both appear to be equipped with sophisticated reentry vehicles.

… The notion that North Korea is testing A-Bombs and H-Bomb components but does not yet have the sophistication to miniaturize warheads and make reentry vehicles for missile delivery is absurd.

They then outline the many warnings by government officials about this:

They also warned that even if North Korea could not fit a nuke on a missile, hiding the nuclear bomb on a ship and sailing it to the U.S. would be easy.

North Korea demonstrated in its July 4 test that its missile could reach Alaska. If it had launched the missile at a different angle, it would have flown 4,000 miles. That’s bad news if you live in Alaska, but if you live in the contiguous United States, you’re fine, right?

Wrong. Here’s what Lewis had to say:

Well, there is a difference between the range the missile demonstrated last week, which was about 4,000 miles, and what the simulations we do at the Middlebury Institute suggest the missile may be capable of. My colleagues, along with David Wright at the Union of Concerned Scientists, looked very closely at the launch of a new intermediate-range missile in May, as well as this one, trying to measure the missile and model its performance. It seems to me that North Korea cut the engines a bit early here, possibly so they did not overfly Japan. But they have been very clear their targets are in the continental U.S.—the Pacific Fleet in San Diego, Washington, and lately New York City—not Alaska. And our initial modeling of this missile suggests that it should be able to deliver a nuclear-weapon-sized payload to most, if not all, those places. We’re still modeling away though.

He’s uncertain how far it can reach. But the experts are not at all confident that North Korea would have to stop at Alaska.

Don’t Worry, America Can Shoot the Missile Down

America has the most advanced missile defense system in the world. And it’s even proved it works. On May 30, the U.S. Missile Defense Agency held what it called a “very realistic” test of its Ground-based Midcourse Defense—which is designed to track and shoot down any North Korean missile.

Except an investigation by the Los Angeles Times suggests that this isn’t true. Instead “the successful intercept provides little if any confidence that the troubled Ground-based Midcourse Defense system, or gmd, would be able to thwart a sneak attack by North Korea, according to missile defense experts familiar with details of the test.”

The Times found that the military fudged the test in some very significant ways:

The Times quoted physicist and radar engineer David K. Barton, saying that “to claim that this is a realistic test of the ability to handle sophisticated threats is ridiculous.”

Lewis also warned of the weakness of the gmd system. He noted that the National Academies panel chaired by Walt Slocombe “concluded that the gmd system intended to defend the U.S. against a North Korean or Iranian icbm needed to be completely redesigned, with new interceptors, new radars and a new concept of operations.” They “suggested starting over almost at square one.”

The experts have little confidence in America’s ability to shoot down a North Korean missile.

Don’t Worry, North Korea’s Not Crazy Enough to Use a Nuke

If North Korea attacked the U.S. with nuclear missiles, it would be suicide. Thus, it’ll never do it.

That may or may not be true. Hans Morgenthau, one of the main thinkers behind the realist theory of international relations—which assumes that, in general, nations will act rationally in their own interest—warned that this would not always be the case. He wrote:

For history shows, if history shows anything, that all nations have been governed at times by fools and knaves, and even a combination of both, That was bad enough before nuclear weapons existed. But imagine a fool or knave or a combination of both in the possession of nuclear weapons, and nuclear war becomes unavoidable. So it is the almost inevitable danger of actual nuclear war, inherent in the dynamism of a generalized unlimited nuclear arms race, which makes nuclear arms control and in the end nuclear disarmament a question of life or death for all mankind.

Betting on the sanity of North Korea is a pretty shaky foundation for your future. But leaving that debate aside, you also have to consider North Korea’s partner in nuclear development: Iran.

By the late 1990s, North Korea had helped Iran build its own version of its Nodong missile—with a range of 600-900 miles. In the 2000s, they acquired a Musudan missile from North Korea, according to former Defense Secretary Robert Gates and the Strategic Studies Institute. This has a range of up to 2,500 miles. Both Fox News and Reuters reported that Iran tested one of these Musudan missiles on January 29. “If true, it suggests that Iran has every intention of developing an icbm, and that it is cooperating with North Korea to do so,” wrote Geopolitical Futures in a paper titled “Iran and North Korea: Brothers in Nuclear Arms.”

There is strong evidence that Iran and North Korea worked together on a nuclear facility in al-Kibar in Syria, which was destroyed by Israel in 2007. Geopolitical Futures noted the frequent, though not completely reliable, reports of Iran scientists participating in North Korean missile tests. “One particularly damning piece of evidence is that since 2010, North Korea has significantly increased its production of highly enriched uranium,” the report states.

“[T]he fact that North Korean uranium enrichment has surged as Iranian enrichment has stopped should be more concerning, given their long history of cooperation in other areas,” it warns.

The idea that North Korea is manufacturing nuclear material for Iran should terrify policymakers. Evidence of Iranian-North Korean cooperation increases by the month. On March 2, the Trumpet reported:

“Iran is steadily making progress towards a nuclear weapon and is doing so via North Korea,” two nuclear experts wrote in a new paper published by the Begin-Sadat Center for Strategic Studies on Tuesday. Dr. Rafael Ofek and Dr. Dany Shoham claim the collusion between the two rogue states creates a way for Iran to clandestinely circumvent the nuclear deal implemented with world powers on Jan. 16, 2016.

The above-mentioned paper went on to cover an abundance of evidence that the nuclear experts worked together. Then on May 2, Iran attempted to launch a cruise missile from a “midget” submarine in the Strait of Hormuz. This is only the latest example of the two nations sharing weapons.

So it’s not just one regime with a nuclear missile that we have to worry about; it is two.

Iran often promises to destroy Israel. Many of its leaders believe they can bring about the return of their messiah by starting world war. North Korea’s advances bring this dangerous regime closer to a fully functioning nuclear missile.

We should not move on so quickly from North Korea’s missile test. The lives of millions—if not the survival of the United States and the free world as a whole—is at stake. The dangers are huge—and real. The presence of such a huge risk should be causing all of us to ask some probing questions about where our nations are heading, where we’ve gone wrong, and what we should do about it.

For more about the very real nuclear danger facing the United States, and the hope out there in this terrible situation, read Trumpet editor in chief Gerald Flurry’s article “The Worst Foreign-Policy Blunder in American History.”