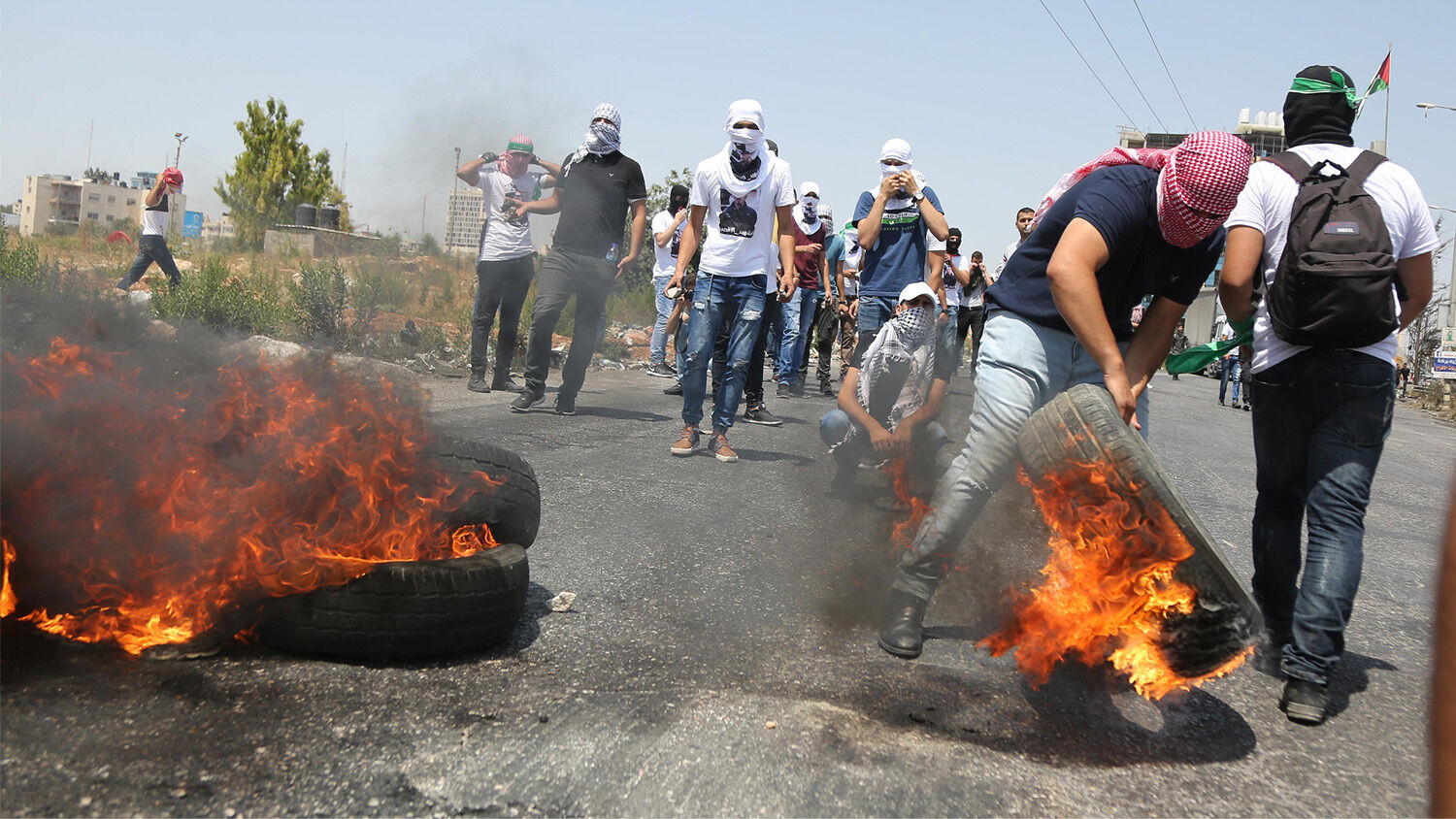 Palestinians clash with Israeli forces on July 24 during a protest against metal detectors at al-Aqsa.
Getty Images

Palestinian society is always one minor event away from reigniting a holy war over al-Aqsa.

JERUSALEM—On Friday, July 14, two Israeli-Arab police officers were killed at the hands of Arab terrorists bearing machine guns and knives who came from the sacred Temple Mount complex. In response, Israel set up metal detectors at the entrance to the 35-acre compound to ensure such an attack will not take place again.

In the two weeks since that attack, the narrative spreading across Palestinian media and the broader Muslim world is that Israel is trying to take over the Temple Mount. The Mount is the location of Islam’s third-holiest site, the al-Aqsa Mosque. Palestinians are using the metal detectors to rally a holy war against Israel.

As of Tuesday morning, the metal detectors have been taken down while Israel pursues more advanced technologies such as sophisticated cameras that are able to detect hidden weaponry. The Prime Minister’s Office said early Tuesday that the security cabinet “accepted the recommendation of all of the security bodies to incorporate security measures based on advanced technologies (‘smart checks’) and other measures instead of metal detectors in order to ensure the security of visitors and worshipers in the Old City and on the Temple Mount.”

Even though the metal detectors have been taken down, the fact remains that any Israeli movement around the Temple Mount, however minor, will be interpreted as justification for holy war.

Palestinian leader Mahmoud Abbas told supporters of the Fatah movement, “The campaign for Jerusalem has effectively begun and will not stop until a Palestinian victory and the release of the holy sites from Israeli occupation.” He later claimed that the metal detectors have been “falsely presented as a security measure,” hiding Israel’s attempt “to take control over al-Aqsa Mosque.”

Another Fatah statement praised last Friday’s Palestinian demonstrators for their “intifada against the enemy,” their “acts for the protection of al-Aqsa, and their struggle against the Israeli plans, while sacrificing souls and blood.”

Ismail Haniyeh, leader of Fatah’s rival faction, Hamas, chose to castigate the rest of the Muslim world for being too silent while Israel supposedly desecrated the Temple Mount (which Muslims call Al-Haram al-Sharif). “Where are you, nation of a billion, while prayer is being prevented at al-Aqsa? Where are the Arab summits while the mosque is being sullied by settlers? … I say to the Zionist enemy that al-Aqsa and al-Quds [Jerusalem] are red lines.”

In each of these cases, the narrative is clear: Israel’s metal detectors and security measures are just another step toward its desire to take over the Temple Mount and refuse access to Muslims. And so, naturally, the Muslims are told they must stand up and fight to protect their holy places.

Such lies are already leading some into murderous rampages.

One such person is 19-year-old Omar al-Abed from the Arab village of Kobar. On Friday night, he took a knife and entered a nearby Jewish village in the West Bank. He knocked on the front door of a personal residence. The unsuspecting family was in the middle of their Shabbat meal but opened the door to the stranger. Minutes later, the grandfather and two of his adult children were killed, and the grandmother was severely injured. The carnage ended only when an off-duty soldier next door heard the screaming, grabbed his weapon, and wounded the terrorist.

This attack took place far from Jerusalem, far from the Temple Mount, far from al-Aqsa. Yet according to Omar, this family that was eating a meal and opened its door to him was a legitimate target in this holy war.

This is what Omar wrote on Facebook just two hours before his murderous rampage: “I am writing my last testament and these are my last words,” clearly thinking he wouldn’t make it through the night, a sacrifice he was willing to make for al-Aqsa. Jerusalem Post translated his post:

I am young, not even 20 years old. I had many dreams and aspirations. But what life is this in which our women and our young are murdered without any justification? They are desecrating the [al-Aqsa] Mosque and we are sleeping. It’s an embarrassment that we are idly sitting by.

Omar then spoke out against other Palestinians for not using their weaponry and declaring war for God:

You, those who have a gun and who are worn out, you who only bring out your gun at weddings and celebrations, are you not ashamed of yourselves? Why are you not declaring war for God? Here they are closing al-[Aqsa], and your gun is silent. All that I have is a sharpened knife, and it is answering the call of al-[Aqsa]. Shame on you, you who preach hatred. God will take revenge on you and will make it count. All of us are the sons of Palestine and the sons of al-[Aqsa]. You, sons of monkeys and pigs, if you do not open the gates of al-[Aqsa] I am sure that men will follow me and will hit you with an iron fist, I am warning you.

Omar’s sharpened knife answered the call to save al-Aqsa, and three innocent people are dead.

Now, Omar is indeed being hailed as a martyr in Muslim circles around the world.

Another round of this “holy war” has begun because Israel set up a few metal detectors to protect both Arabs and Jews. Living in Israel, it seems that the only place that metal detectors haven’t historically been used is where Muslims gain access to the Temple Mount. Of course, if you are a tourist or a Jew wanting to visit the Temple Mount, you have had to go through a metal detector for years to gain access. Even then, you can only reach the Mount at very limited times during the week. Installing simple metal detectors at the Arab gates would simply raise the Temple Mount to the standard of public safety afforded other locations where public gatherings take place. Furthermore, Mecca and Medina, the first two sites most sacred to Islam, have far more stringent security measures in place (including metal detectors and security cameras) compared with the Temple Mount.

But this isn’t about metal detectors. It is about the long-standing Palestinian goal to wrest complete control of the Temple Mount from Israel. These security measures are just the latest excuse.

In 2000, Israeli Prime Minister Ariel Sharon visited the Temple Mount. The Palestinians’ reaction to that should have been little more than a verbal debate. Instead, their reaction was the second intifada. That “al-Aqsa intifada” also used the narrative that Israel was trying to take over the Temple Mount in order to motivate its Palestinians to blow themselves up on buses and in cafés throughout Israel. In the end, over 1,000 Israelis were killed, not to mention thousands of Palestinians who died believing a narrative that was as untrue then as it is today.

In this latest recurrence, Palestinian society had already been primed for a holy war over al-Aqsa. For the Palestinians, the metal detectors are simply proof of what they have been told for years: Israel is trying to take over al-Aqsa. Of course, if Israel wanted to take over the Temple Mount, Judaism’s holiest site (believed to be the location of the first and second temples), it has had the means and, some would say, the justification for doing so for over 50 years. And yet, to this day, there has been no attempt to take over the sanctuary, nor exercise greater control over it. For proof of that fact, read this column by David Horovitz.

British Israeli commentator Melanie Phillips recently drew attention to a couple of these recent statements from Palestinian officials that have created the volatile situation:

Over the years … Palestinian officials and preachers have repeatedly incited violence against Israel on the transparently false pretext that Israel intends to take over al-Aqsa. What is notable about this incitement is that it vilifies Jews and Judaism, using classic anti-Semitic and Islamic tropes.

Thus, Abbas promised not to allow the Jews’ “filthy feet” on Temple Mount.

A teacher at al-Aqsa Mosque school said Jews who visit the Temple Mount were “monkeys and pigs.”

A preacher outside al-Aqsa implored followers to “slaughter” Jews.

Another teacher on the Waqf [the Jordanian organization that manages the Temple Mount] payroll told followers that the Nazis burned the Jews of Europe during the Holocaust because the Jews had been kidnapping children to use their blood to bake Passover bread.

Last February, a [Palestinian Authority] official claimed the Israelis were planning to “Judaize” Jerusalem and “defile” al-Aqsa. “‘If the settlers [i.e. the Israelis] and the extremist groups do not stop this, they will find their deaths at the hands of the Muslims there, who will not allow the enemy to harm the al-Aqsa Mosque and to defile it, even if it costs them their lives.”

Instead, the Waqf and the Palestinian leadership are looking to use this situation to further erode Israel’s ever shrinking sovereignty over the Temple Mount. This is part of their long-term strategy.

As an example, on July 23, 2000, one day before their meeting at Camp David ended, United States President Bill Clinton was desperately trying to devise a peace deal between then Israeli Prime Minister Ehud Barak and Palestinian leader Yassar Arafat, a known terrorist. Barak was already willing to carve up Jerusalem and give Arafat the eastern side and then work out some deal over the Temple Mount. But it wasn’t good enough for Arafat.

Dore Gold brings out in his book The Fight for Jerusalem how Arafat summarized his hardened position:

I will not agree to any Israeli sovereign presence in Jerusalem, neither in the Armenian quarter, nor in the al-Aqsa Mosque, neither in Via del La Rosa, nor in the Church of the Holy Sepulcher. They can occupy us by force, because we are weaker now, but in two years, 10 years or 100 years, there will be someone who will liberate Jerusalem from them!

Within two months of that statement, Arafat was calling for a new war against Israel—and he got one: the al-Aqsa intifada.

It has always been the Palestinian goal to take the Temple Mount completely out of the hands of Israel. Because of the constant lies about Israel’s attempts to block access to Muslims, Palestinian society constantly lives one benign event away from instigating a holy war to “protect al-Aqsa from the Jews.”

In 2000, the impetus was an Israeli leader visiting the place where he believed the Jewish temple once stood. In 2017, it is metal detectors and legitimate security measures.

Will this ever end? Is this situation hopeless?

We at the Trumpet take no pleasure in the loss of life, whether it’s the Palestinian that is driven by a religious fervor predicated on a pernicious lie or the Jews who are killed as a result. But we do watch these events closely because Trumpet editor in chief Gerald Flurry has said for over a decade that the Bible prophesies that East Jerusalem will fall to the Arabs in the near future. (You can read that forecast in his booklet Jerusalem in Prophecy.) He also writes more specifically that the Temple Mount itself will fall into Arab hands. As Mr. Flurry relates in Jerusalem in Prophecy, that will only occur after there is a fight with Israel over that territory.

However, that’s not where the prophecy ends. There is a hope-filled conclusion to the bloodshed we are witnessing over the Temple Mount. It’s impossible to explain the weight of those positive events briefly, so if you are inclined and are looking for some hope in the circular and repetitive nature of these attacks, please request and read all of Jerusalem in Prophecy. It’s free, and it is just a click away.