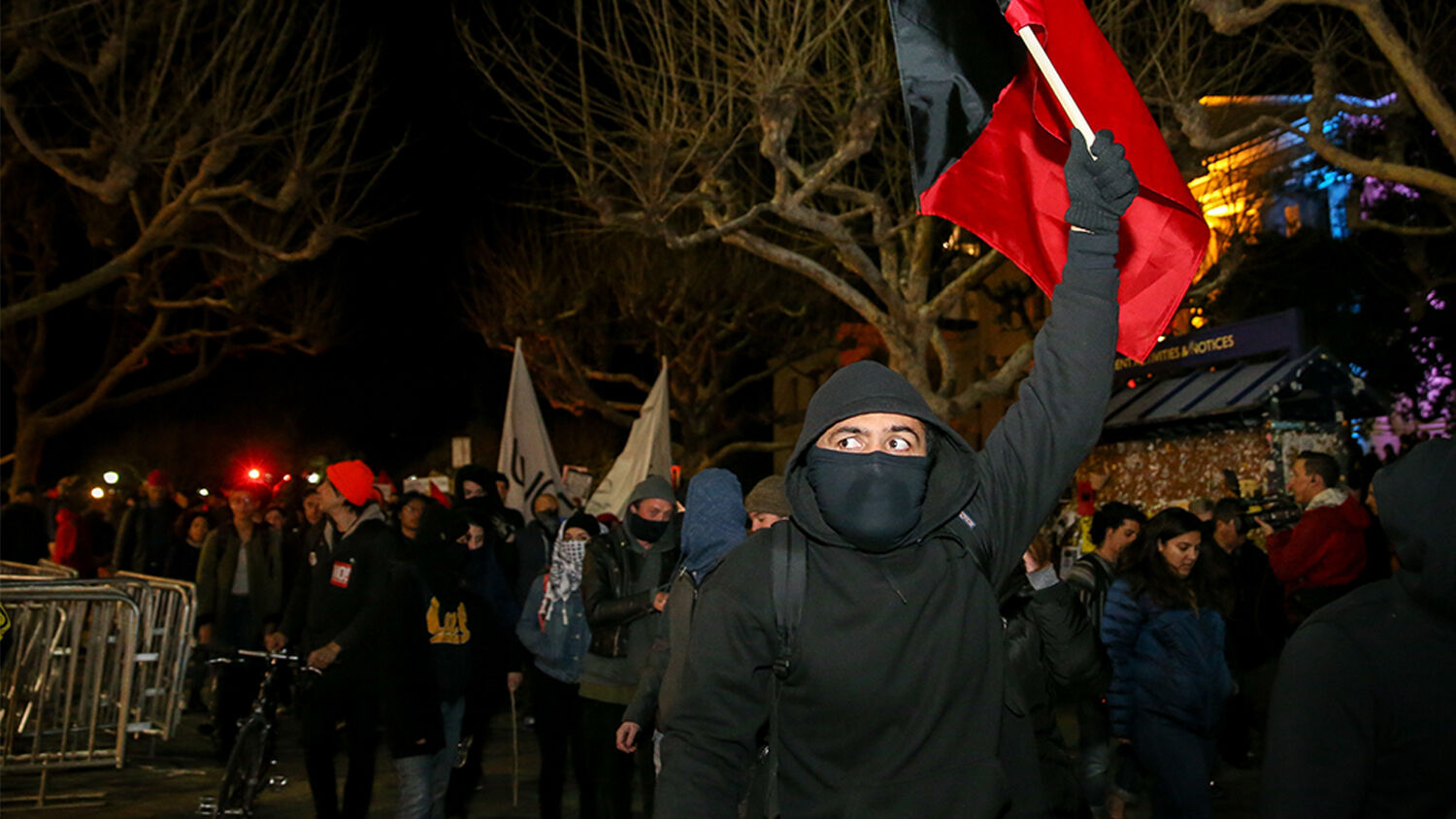 Protesters march off the UC Berkeley campus on February 1, 2017 in Berkeley, California. A scheduled speech by controversial Breitbart writer Milo Yiannopoulos was cancelled after protesters and police engaged in violent skirmishes.
Getty Images

Keep an open mind, ‘but not so open that your brains fall out.’

Every year at Herbert W. Armstrong College, each freshmen walks into the college bookstore and buys Allan Bloom’s book on modern education: The Closing of the American Mind. To be truly educated, it’s helpful to know what education shouldn’t be.

Or as Prof. Walter Kotschnig told students at Mount Holyoke College in 1940: Keep an open mind, “but not so open that your brains fall out.”

Bloom’s book came out in 1987—30 years ago—became hugely successful, and was then thoroughly attacked. Werner Dannhauser collected the main criticisms into 16 categories, which include, among others: idealism, sexism, racism, elitism, esoteric writing, sloppy writing, ignorance of professional philosophy and bad scholarship. One critic called it “Hitleresque.” Not much to worry about, these are the usual criticisms of anything conservative.

In the first sentence of the introduction, the freshmen are hit with the heart of Bloom’s critique. “There is one thing a professor can be absolutely certain of: almost every student entering the university believes, or says he believes, that truth is relative.”

If this belief is put to the test, one can count on the students’ reaction: they will be uncomprehending. That anyone should regard the proposition as not self-evident astonishes them, as though he were calling into question 2 + 2 = 4. These are things you don’t think about.

Right and wrong, good and evil—these are cultural things. Ever changing and based on one’s culture: where they lived or what time they lived. “The danger [students] have been taught to fear from absolutism is not error, but intolerance,” Bloom continued.

And later on in the book, the resulting conclusion:

Openness used to be the virtue that permitted us to seek the good by using reason. It now means accepting everything and denying reason’s power.

Thirty years have passed since Bloom wrote those sentences. Has he not been vindicated? When we look at universities, the media or public policy, the culture of tolerance trumps even the culture of reason.

Take the Family Policy Institute of Washington’s Joseph Backholm, who interviewed students of Washington University in 2016. “There’s been a lot of talk about identity lately,” he says. “But how far does it go? And is it possible to be wrong?”

He starts by asking students if it’s fine if he identifies as a woman. “Good for you. OK,” he receives as a reply. What about identifying as Chinese? Still fine. What about a 7-year-old? OK. What about as 6 feet, 5 inches tall (Backholm is 5 feet, 9 inches). In the end, the students are hesitant to believe he is really 6-foot-5, but they are willing to accept he believes it and won’t tell him he is wrong.

In The Closing of the American Mind, Bloom spent a lot of time discussing the ancient Greek philosopher Plato. He does so not because Plato is right about everything. It’s because Plato believed there was right and wrong, and it was man’s duty to find the truth.

Plato used a technique called dialogue. In his books, various citizens come to Plato’s teacher, Socrates, to discuss topics through questions and answers. Eventually, through questions, answers, counters and retorts, Socrates believed one could find the truth.

Compare this to the recent protests on campuses over conservative speakers. It’s now routine to see students try to shut down speeches because they hear the speakers are “fascists,” “racists,” “xenophobes” or “white nationalists.” It has happened to Ann Coulter and Milo Yiannopoulos at the University of California–Berkeley, Ben Shapiro at California State University, Gavin McInnes at New York University, and Charles Murray at Middlebury College.

The students carry banners with cheap slogans and shout until the speaker decides to leave or hold the talk elsewhere. It’s unlikely, especially in the case of Murray, that the students have even read the speakers’ work. They’ve just heard they’re evil, racist xenophobes that need to be silenced.

It would be as if Socrates, engaging in diaologue, suddenly met a new citizen. Instead of questions and answers, the Greek citizen simply held up a banner—“corrupter of the youth!”—and shouted obscenities until Socrates shut up and left.

British journalist Melanie Phillips experienced the same thing when touring the United States in May. Arriving at UC–Berkeley, she was told protesters had made the original speaking venue “too dangerous” to attend and was moved to a “more discreet center.”

The Progression of Education

In the third section of his book, Bloom gave a whirlwind history of Western thought.

Then returned the age of divine revelation—for better or worse—when Christian dogma determined the truth.

Then onto the Enlightenment. Revealed truth was discarded and men believed reason alone could determine the truth about everything and the solution for every problem.

Finally, the era of moral relativism. The rationalists saw that every culture, at every time in history, thought they had the truth. They couldn’t all be right. They concluded that everything one saw and believed was filtered through the lens of their culture, their background, their time in history. German philosopher Friedrich Nietzsche summed it up: “There are no facts, only interpretations.”

The result in education is the mind being so open it becomes closed. If you’re open to everything then nothing can be wrong.

The so-called knowledge explosion and increasing specialization have not filled up the college years but emptied them. … These great universities—which can split the atom, find cures for the most terrible diseases, conduct surveys of whole populations and produce massive dictionaries of lost languages—cannot generate a modest program of general education for undergraduate students. This is a parable for our times.

Bloom wrote that in 1987. And yet the same ideas were written decades earlier by Herbert W. Armstrong as he explained the paradox of man’s supreme knowledge and continuing troubles:

We send men to cavort about on the moon and return them safely back to Earth. Unmanned spacecraft land on Mars and send back to Earth close-up photographs of the Martian surface. Other unmanned spacecraft fly close to Jupiter and send back astonishing pictures of Jupiter and the rings of Saturn. Surgeons transplant human hearts and other organs. … But paradoxically, it’s also a world of ignorance! Even the educated know not how to solve their problems and the world’s evils. They know not the way of peace or the true values of life!

Alan Bloom and Herbert Armstrong both saw the collapse of higher education. But they had different solutions. At the end of his book, Bloom advocated a return to reading the “great books”—the classic texts of history—as their authors intended them: as a quest for truth.

Every freshmen at Herbert W. Armstrong College receives a different message, with the guidance of their college’s namesake. In 1966, he told students:

[T]rue education is not of the intellect alone but of the whole personality—not alone of technologies, sciences and arts, but an understanding of the purpose of life, a knowledge of the spiritual laws which govern our lives, our God-relationship and human relationships; not a memorizing of knowledge alone but a thorough training in self-discipline, self-expression, cultural and character development; not book learning only, but broadening travel and experience; not only hearing and learning, but doing.

That view of education is explored in our booklet Education With Vision, which is also the motto of Herbert W. Armstrong College (download your free copy). It was written by Trumpet executive editor and Herbert W. Armstrong College president Stephen Flurry, who taught for many years the Principles of Living course where freshmen read The Closing of the American Mind. That education is based not on the rationalist idea that “there are no facts, only interpretations,” but on that fact that there is truth, and you find while searching, and living by, the Bible.