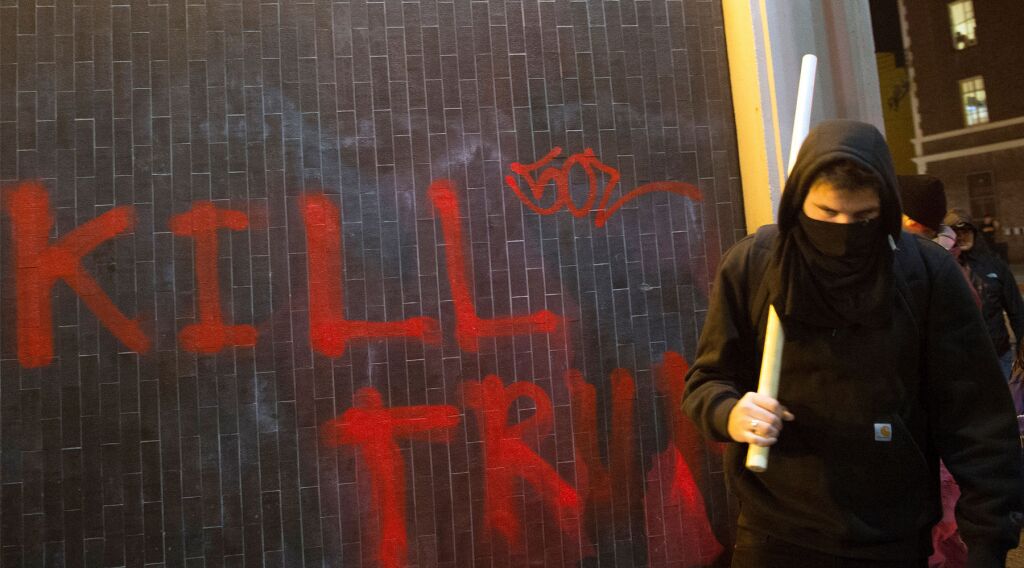 “When and if fascism comes to America it will not be labeled ‘made in Germany’ … it will not even be called fascism; it will be called, of course, ‘Americanism.’” That was the prediction of Halford Luccock in 1938.

When one watches the rioting, burning and smashing that occurred at the University of California, Berkeley—all in order to stop an alleged “racist” or “fascist” from giving a speech—one can see how prophetic Luccock’s prediction was.

On Wednesday night, a few thousand people descended onto the Berkeley campus with the intent to block Breitbart editor Milo Yiannopoulos from giving a speech. The mainstream media described this group as the “peaceful protesters.” A few hours later, another group of 150 people arrived—dressed in black and wearing masks. The group started throwing rocks, then barricades, then lit a generator on fire, which produced massive, building-high flames. People were beat up, others were assaulted with pepper spray, and windows were smashed. Meanwhile, the “peaceful protesters” cheered and chanted, holding signs saying, “This is war” and “Become Ungovernable.”

We won this night. We will control the streets. We will liberate the land. We will fight fascists. We will dismantle the state. This is war. pic.twitter.com/JnlJMUtgCj

All this was done to fight against “fascism” and “hate-speech” that was “un-American.” All these words have become weapons of the war on language, part of the increasing vocabulary that George Orwell described as meaning nothing except “something not desirable.” Jim Geraghty wrote:

Let’s be clear: a significant number of Americans, both on and off America’s college campuses do not believe in other people’s right to give speeches with perspectives and ideas they oppose. The boss [Rich Lowry] noticed how frequently the term “un-American” is thrown around these days in the debates about immigration law. Physically attacking people because they have different beliefs is about as un-American as it gets.

Over $100,000 worth of damage was done to the campus. As is usual, only one person was arrested by police.

The mainstream media then hustled in to explain that the violence was only committed by a small minority. “The university blamed ‘150 masked agitators’ for the unrest, saying they had come to campus to disturb an otherwise peaceful protest,” cnn wrote. Of course. By this logic, the thousands of people standing by and cheering on the group of anarchists are beyond reproach.

“What you’ll notice (and what you’ll experience, if you ever find yourself in the middle of violent left-wing protest) is that the rioters and the ‘peaceful’ protesters have a symbiotic relationship,” wrote David French for National Review:

The rioters break people and destroy things, then melt back into a crowd that often quickly and purposefully closes behind them. They’re typically cheered wildly (to be sure, some yell at them to stop) and often treated as heroes by the rest of the mob—almost like they’re the seal Team Six of left-wing protest.

All this happened at the University of California–Berkeley, a university ranked 10th in the world. It’s supposedly the cream of the academic crop, the height of educated sophistication. Over 50 years ago, students at Berkeley sparked the 1964 Free Speech Movement. Today it is vaulting itself into the vanguard of lawless protest whose only purpose is destruction. Trumpet editor in chief Gerald Flurry wrote:

Look at what is happening to higher education in America. Nasty, empty-headed children are taking over the universities. Some of what these students are learning borders on insanity and will prove to be dangerous to America.

It is proving itself dangerous. “The country is unraveling,” Frank Luntz told cbs in an interview. “I think we have 1968 all over again.”

It has come to the point where respected writers are commenting on what the Trumpet has been prophesying for years (see Gerald Flurry’s “America’s Coming Civil War”). In a column written at the beginning of the year, syndicated columnist Dennis Prager wrote:

In fact, with the obvious and enormous exception of attitudes toward slavery, Americans are more divided morally, ideologically and politically today than they were during the Civil War. For that reason, just as the Great War came to be known as World War i once there was World War ii, the Civil War will become known as the First Civil War when more Americans come to regard the current battle as the Second Civil War.

Jesus Christ’s timeless proverb needs to be taken more seriously: “A house divided against itself cannot stand.” The violence at the University of California–Berkeley is a picture of the future of America as a whole: divided and dangerous.