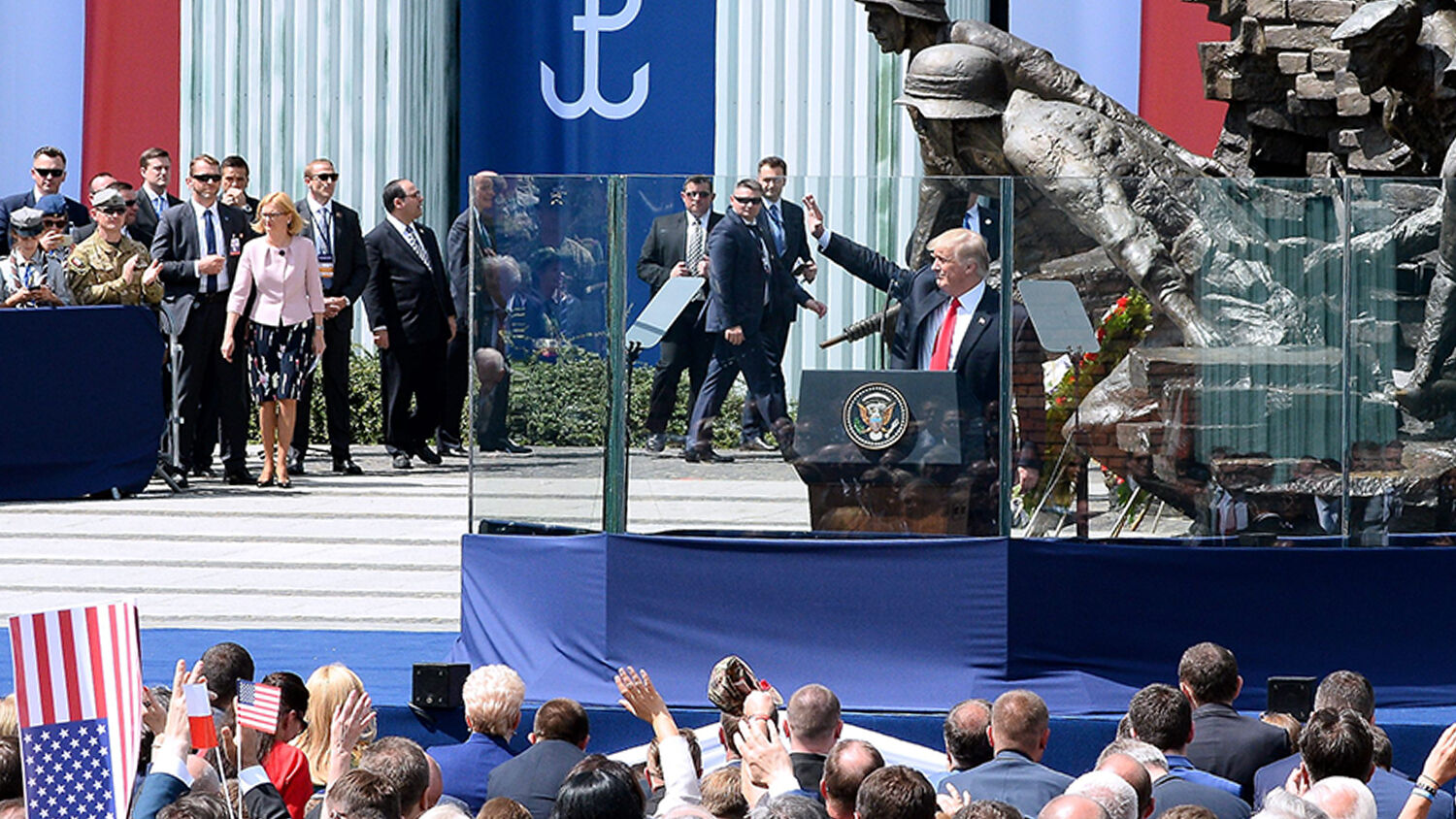 Public speech of the President of the United States of America, Donald J. Trump at the Warsaw Uprising Monument at Krasinski Square on July 06, 2017 in Warsaw, Poland.
Getty Images

Donald Trump asks a question that should concern us all.

The following is from last week’s July 6 Trumpet Brief. These daily e-mails contain personal messages from the Trumpet staff. Click here to join the nearly 20,000 members of our mailing list, so you don’t miss another message!

“The fundamental question of our time is whether the West has the will to survive.”

This lightning-bolt statement came from the lips of President Donald Trump. He said it earlier today, during a visit to the Polish capital of Warsaw before an enthusiastic crowd of Poles.

It was his first major speech in Europe, and it was quite stunning. He decried the threats from within and abroad, “forces that threaten over time to undermine our values and erase the bonds of culture, faith and tradition.” Among those threats, he specifically named Islamic terrorism and Russian aggression.

The backdrop for his address was a monument of the 1944 Warsaw Uprising, which fought to liberate the city from the Nazis. President Trump praised Poland as an example of a nation possessing the will to defend itself.

“We have to remember that our defense is not just a commitment of money, it is a commitment of will,” he said. “Because as the Polish experience reminds us, the defense of the West ultimately rests not only on means but also on the will of its people to prevail” (emphasis added throughout).

It was at this point that he said, “The fundamental question of our time is whether the West has the will to survive.”

This is truth. It encapsulates the seriousness of the threats facing the West. And it captures the essence of why the West is proving itself unable to meet those threats.

“Do we have the confidence in our values to defend them at any cost?” President Trump continued. “Do we have enough respect for our citizens to protect our borders? Do we have the desire and the courage to protect our civilization in the face of those who would subvert and destroy it? We can have the largest economies and the most lethal weapons anywhere on Earth, but if we do not have strong families and strong values, then we will be weak—and we will not survive.”

Not only does this statement reflect reality, alarmingly visible all around us, but it also is perfectly consistent with the Bible—its history, its law and its prophecy. If you have read The United States and Britain in Prophecy, if you have followed the Trumpet for any length of time, you recognize this.

The Trumpet’s editor in chief, Gerald Flurry, has been talking for decades about this very thing. “The world’s only superpower lacks the will to survive!” he wrote in a 2004 letter to supporters of this Work. In that letter he was talking about America failing to confront Iran for its provocations. He made a similar statement in 2007 when the Bush administration hosted an Arab-Israeli “peace” conference. “This is not the way to peace—it’s the way to war! Just as it was in the 1930s. We are nurturing the Nazi spirit to our everlasting shame!” he wrote. “This is about two nations—America and Israel—who lack the will to survive! It’s about the end of two world powers! It has horrifying consequences for the West.”

We could add many more threats to the two that Mr. Flurry identified a decade ago—both those abroad like Russia, China and North Korea, and those within like the lawlessness and immorality splintering our families and societies. America and other Western nations have rendered themselves unable to even correctly recognize these threats, let alone unify our peoples against them and summon the will to defeat them!

That is because, as punishment for our sins, God has broken the pride of our power (Leviticus 26:19).

President Trump finished his speech with this pledge: “I declare today for the world to hear that the West will never, ever be broken. Our values will prevail, our people will thrive, and our civilization will triumph.”

This is false. The truth is that “our values,” which have become staunchly anti-God, will not prevail. They cannot if mankind is ever to experience true peace and prosperity. God wants to teach us true values. But before we will acquiesce to that, we have to recognize and acknowledge our rebellion. Our nations are already being broken. But they will be broken far more dramatically before God can start to rebuild them.

If you want to learn more about this, I suggest you read one of my favorite articles from our archives on the subject, “The End of the Free World”—written back in 2002.