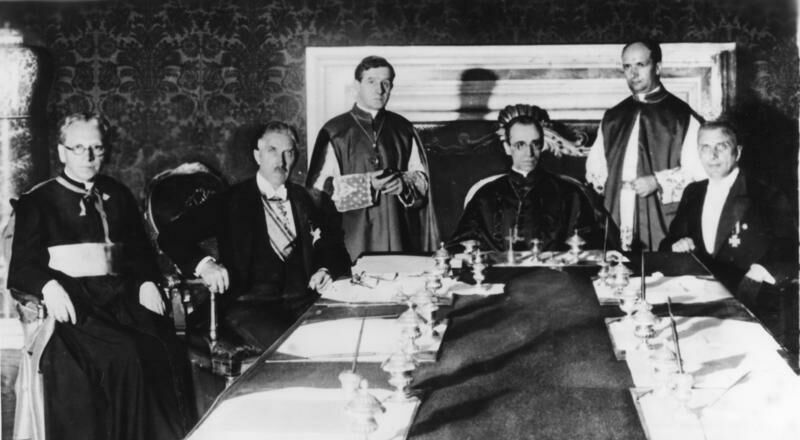 Pope Pius XII at the signing of the Reichskonkordat on 20 July 1933 in Rome.
Bundesarchiv

We have just been told about Pope Pius XII’s exploits on behalf of the Jews. What were they, really?

“How many people took risks in the middle of the war to hide Jews so that they were not killed, starting with Pius xii?” commented Pope Francis in a morning Mass early this month. “They risked their skin! But it was an act of mercy to save the lives of those people!”

Francis’s recent comments have been trumpeted by the Catholic Church as a means of reversing a negative image of Pope Pius xii for his oft-criticized silence and lack of action during World War ii against Nazi Germany’s atrocities. Pope Benedict xvi in 2008 made similar comments about Pope Pius xii: “Wherever possible he spared no effort in intervening in their [the Jews’] favor either directly or through instructions given to other individuals or to institutions of the Catholic Church.”

Pope Francis and Emeritus Pope Benedict xvi are some of the most powerful men on Earth. When they speak, billions listen. What are we to make of their comments? Rather than Pius being either mute or even accessory to the murderous Nazi regime, should he instead be remembered as a savior of the Jews? Has Pope Pius really just been given a bad rap?

John Cornwell thought so. A practicing Catholic and fellow of Jesus College in Cambridge, Cornwell was well aware of the arguments against Pius xii. He took it upon himself to vindicate the pope by undergoing a massive biographical project. Reaching out to the Vatican, and assuring them that he was on the side of the pope, Cornwell was given unprecedented access to the closed Vatican archives.

Partway into his research, Cornwell stated that “I found myself in a state I can only describe as moral shock. The material I had gathered, taking the more extensive view of Pacelli’s [Pius’s given name] life, amounted not to an exoneration but to a wider indictment.” And thus Cornwell’s research produced his famous book under the condemning title Hitler’s Pope.

Since coming out with the book, Cornwell has faced a backlash from the conservative Catholic community. One of those critics is Peter Gumpel, a senior Vatican official in charge of Pius xii’s beatification process—part of the journey in officially making Pius a saint. Gumpel regards Cornwell’s work as “totally worthless” historically, assuring that it will not factor into his official assessment of Pius.

Where does Pope Pius xii’s criticism come from?

Prior to his pontificate, Cardinal Eugenio Pacelli was the chief signatory of the Reichskonkordat. This was a treaty between the Vatican and Hitler’s government, signed in 1933. The treaty guaranteed the rights of Roman Catholics in Germany, but also essentially removed all political opposition to the growing Nazi Party. The Catholic Church agreed not to engage in political activities. Bishops were required to take an oath of loyalty to the government of the Reich—Hitler’s government. Hitler clearly understood the signing to signify that he had won the church’s approval. He stated that the German-Vatican pact was a “great achievement” that would notably help “in the developing struggle against international Jewry.” Despite some opposition from those within the Catholic Church, Pope Pius allowed the treaty to stand—in fact, it remains in force to this day.

As Europe devolved into war, the cruelty of the Nazi war machine became obvious—especially the roundup and extermination of Jews. Pius was repeatedly adjured to speak out against the genocidal activities, by both the Allies and Jewish groups. Finally, in December 1942, Pius used a Vatican radio address to make the statement that thousands “sometimes only by reason of their nationality or race are marked down for death or gradual extinction.” This is recorded as having been Pius’s strongest statement against Hitler’s actions. No specific mention, however, was made of Jews, Nazis or Hitler.

Ten months later, nearly 400 SS troops descended on Rome and rounded up 1,060 Jews. They were interred for two days in a building within half a mile from the Vatican. Pius, it has been revealed, was one of the first to know of the situation. Yet without resistance, the Jews were loaded into cattle cars and transported to Auschwitz. Within one week, over 800 of them were gassed to death. Only 15 survived the war. One of the survivors discussed the pope’s actions—or lack thereof—with 60 Minutes presenter Ed Bradley. She was found lying on a pile of corpses by the Allied liberators—the only woman of the surviving 15 who had been deported from Rome. She had suffered a particularly gruesome fate, having been used as a guinea pig for the infamously evil Dr. Josef Mengele’s medical experiments. She said to Ed Bradley:

Didn’t the pope know where they were taking us? Didn’t he ask himself where those railroad tracks ended up? We were right under his window, but his voice wasn’t lifted. Nobody came, not even to save a child.

In defense of the pope, Gumpel states that after hearing news of the roundup, Pius sent his secretary of state, Cardinal Luigi Maglione, to summon the German ambassador and make a strong protest. This “strong protest” was actually recorded in the Vatican archives.

Cardinal Maglione asked German ambassador Ernst von Weizsäcker to intervene. The German ambassador, however, himself not enthused about the roundup of the Jews, asked for an official papal protest as a more effective method. He asked Maglione: “What will the Holy See do if these things continue?” Maglione’s response was telling (emphasis added throughout):

The Holy See would not wish to be put in a situation where it was necessary to utter a word of disapproval … the Holy See had shown … the greatest prudence in not giving the German people the least impression of having done or wished to do, the least thing against the interest of Germany during this terrible war.

So much for a “strong protest.” Thus the train departed with over 1,000 Jews aboard, stopping in Padua, Northern Italy, along the journey. The Bishop of Padua appealed for papal action—none was given.

The Allies had been requesting the pope to make a statement against the atrocities, in lieu of their own declaration of reprisals for them. Maglione replied that the papacy was “unable to denounce publicly particular atrocities.”

There’s also the condemnation of Pius’s support for the fascist Croat regime during the war, which was engaged in genocide against the Serbs. These atrocities were well documented at the time—yet Pius himself repeatedly met with Croatia’s leader Ante Pavelić during World War ii and promised to give him his “personal blessing again.” Pavelić was a leader who, as a shocked Italian journalist discovered, kept in his home a bowl of Serbian eyeballs he had been collecting. Fortunately for Pavelić, the Vatican was able to shelter him and help him flee to South America after the war. That’s more than can be said for the countless Serbs murdered under his regime through special medieval-style torture methods. As with the Jews, though, did Pius have anything to say about that?

Frankly, judging by history, Pope Pius xii was no savior. Worse, in many ways he was accessory to the murderous rampage of the Nazi war machine. His signing of the Reichskonkordat gave official Catholic support to the Nazi Party. Pius’s deafening silence about the Jews and total refusal to call out or condemn Hitler and Nazi Germany, even while Catholic bishops, priests and nuns themselves were being murdered, amounted to de facto support. His lack of direction and control allowed Catholic leaders below him to express full sympathies and assistance for Hitler’s plans (there were indeed such individuals; in fact, it was a Jesuit priest who helped Hitler in writing his anti-Semitic diatribe Mein Kampf). And it was the Vatican that helped Nazi war criminals escape after the war through their infamous “ratlines.”

The recent blandishments of Pope Francis toward Pope Pius are another example of revisionist history in the attempt to whitewash the Catholic Church’s actions during World War ii. While the few living Holocaust survivors and their descendants still desire to hear an official apology, it certainly seems that none will come. How could one be given, anyway? A pope, after all, is “infallible.” He is the “vicar of Christ”—or “in place of” Christ. Yet what would Christ—the real Savior—have done? Would He have helped Nazis escape to South America? Would He have signed a concordat with the Nazi Party? Would He have remained silent while over a thousand Jews were being rounded up outside His window? Would He have promised a repeat personal blessing on the “butcher of the Balkans”?

It’s no wonder, considering this history, that the Vatican advises us to remember Pius’s “intense relationship with God and continuous search for evangelical perfection,” rather than “the historical impact of all his operative decisions.” Pope John Paul ii said of him:

[T]he church does not celebrate the specific historical decisions he may have made, but rather points to him as someone to be imitated and venerated because of his virtues, in praise of the divine grace which shines resplendently in them.

Yet if Pius really strove for “evangelical perfection,” he would have heeded the following words of God Himself: “Do not stand idly by when your neighbor’s life is threatened. I am the Lord” (Leviticus 19:16; New Living Translation).

There is more to this dark history than just the black record of Pope Pius xii. In fact, there are biblical prophecies about where a continuing track record (as demonstrated through the early Crusades, the Medieval Inquisitions and World War ii) is heading. You can read more about this in Brad Macdonald’s detailed book The Holy Roman Empire in Prophecy.

In 2009, Pope Pius xii was made “venerable” by the Catholic Church. To be declared venerable, one must have exhibited “heroic virtues.” Yet truth be told, there is no historical justification for, or veneration of, this man. History—and God—will be his judge.