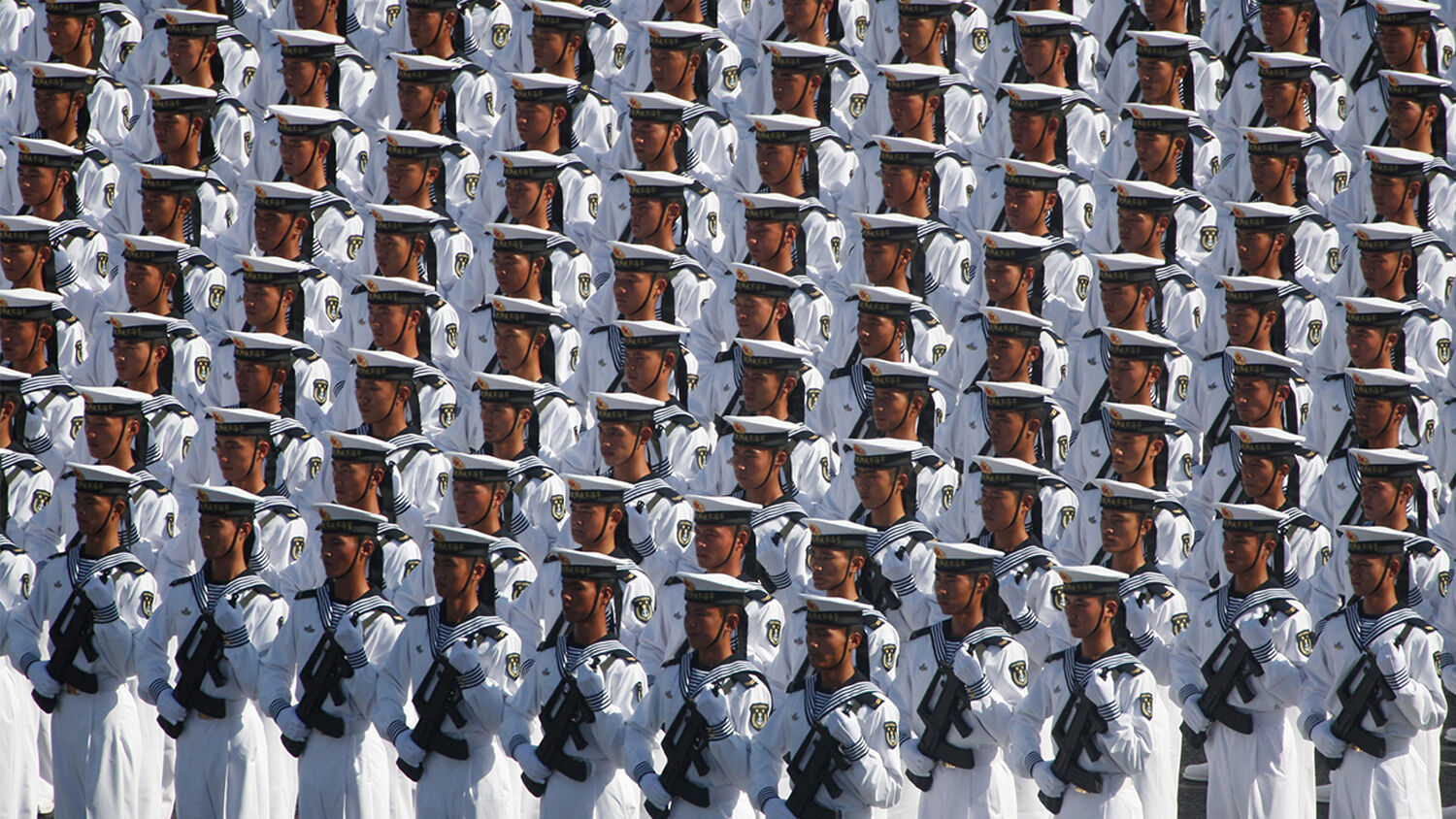 The Pentagon’s annual assessment on the Chinese military reveals a nation preparing for war.

By late 2015, China finished creating over 3,200 acres of artificial land in the Spratly Island region of the South China Sea. Now it has begun the process of arming its newly created bases, according to an annual report released this week by the Pentagon. The report noted, “As of late 2016, China was constructing 24 fighter-sized hangars, fixed-weapons positions, barracks, administration buildings, and communication facilities at each of the three outposts.”

China’s main interest is in tightening its grip over the contested islands. “[M]ost analysts outside China believe that the Chinese government is attempting to bolster its de facto control by improving its military and civilian infrastructure in the South China Sea,” the report said. “China will be able to use its reclaimed features as persistent civil-military bases to enhance its presence in the South China Sea and improve China’s ability to control the features and nearby maritime space.

China’s military ambitions, however, far exceed simply arming its illegally made islands. It wants to compete with the United States, to defend its trade interests around the globe, and to possibly take over Taiwan in the near future.

In 2016, China increased its military budget by 5.4 percent. The nation was the world’s second biggest defense spender at $144.3 billion. Here’s a look at where China is putting that money.

This year, China introduced its first domestically made aircraft carrier, a model based on an old Soviet Union design similar to its other carrier, the Liaoning, which is thought to be used as a training ship. The Pentagon noted that the carrier is less advanced than U.S. carriers, but nonetheless will enable China to engage in conflicts and operations in the “far seas.”

China’s primary interest is in bulking up its so-called local defenses, what the report calls the “near seas.” China’s modern “Great Wall” are defenses along its east coast consisting of cruise missiles, submarine launched missiles, torpedoes and naval mines. All of this, the Pentagon wrote, provides China’s Navy “with an ability to counter an adversary fleet’s intervention with multi-axis, high-intensity attacks that increase in lethality as adversary naval combatants approach China’s coast.”

China plans to continue manufacturing, as well as buying, more submarines and ships, not only to defend its coasts, but also to protect its interests abroad, in what the Pentagon report calls the “far seas.”

China is the globe’s biggest trading power. It is especially concerned about protecting its “string of pearls,” Chinese-owned ports along the southern coastline of Asia. The Pentagon report noted that, in 2016, China conducted military exercises with nations like Indonesia, Cambodia, Thailand, Singapore, India, Pakistan and Saudi Arabia, nations that have coastlines along China’s cherished trade routes.

In February 2016, China began building its first overseas military base in Djibouti.

“The plaaf continues to modernize and is closing the gap rapidly with Western air forces across a broad spectrum of capabilities. This development is gradually eroding the significant technical advantage held by the United States,” the Pentagon wrote.

The biggest developments for China’s Air Force are two new fighter jets, the J-20 and FC-31. China introduced the J-20 publicly at an air show in November. The report stated:

The J-20 and FC-31 are expected to feature high maneuverability, low-observability and an internal weapons bay. Other key features include modern avionics and sensors that offer more timely situational awareness for operations in network-centric combat environments; radars with advanced tracking and targeting capabilities; protection against enemy electronic countermeasures; and integrated [electronic warfare] systems. These aircraft, which could begin to enter service as early as 2018, will significantly improve China’s fleet of fourth-generation aircraft ….

Along with its new jet fighters, China is upgrading its bomber fleet, which will “give it the capability to carry new, longer-range cruise missiles.”

China is currently capable of launching nuclear weapons from land and sea. In 2016, its air force made public efforts to “produce an advanced long-range strategic bomber.”

In late 2015, the People’s Liberation Army created the Strategic Support Force (ssf) to command the nation’s space and cyber missions. The Pentagon wrote, “China’s space program continues to mature rapidly. … China also continues to develop a variety of counterspace capabilities designed to degrade and deny the use of space-based assets by adversaries during a crisis of conflict.”

China hopes to have an operational space station by 2018. Last year, it successfully launched cargo shuttles that will eventually be used to supply the station.

“The pla is acquiring a range of technologies to improve China’s counterspace capabilities,” the report said. “In addition to the research and possible development of directed-energy weapons and satellite jammers, China is also developing anti-satellite capabilities and probably has made progress on the anti-satellite missile system that it tested in July 2014.”

The ssf is also responsible for China’s cyber missions. China realizes it lags behind the United States when it comes to cyber capabilities, the report notes, but is adamant on seizing “cyberspace superiority.” China’s quick response to stay competitive is to conduct “offensive cyber operations to deter or degrade an adversary’s ability to conduct military operations against China.”

China “has modernized its conventionally armed missile force extraordinarily rapidly,” the Pentagon report found. The pla is developing long-range precision missiles that are capable of striking U.S. bases in Japan and Guam. “The plarf is prepared to conduct missile attacks and precision strikes against high-value targets,” the report said, “such as Taiwan’s CS facilities, air bases, radar sites, and others in an attempt to degrade Taiwan’s defenses, neutralize Taiwan’s leadership, or break the public’s will to fight.”

On the defensive side of things, China is also developing a missile umbrella to intercept potential attacks.

Steering the World Toward War

China blankets its military buildup with terms like “peace-keeping,” “defense” and “antipiracy.” The reality is that China is aggressively trying to fill the post-America vacuum.

“China is intimidating the nations of Southeast Asia into submission to its will,” Trumpet editor in chief Gerald Flurry wrote last July. “It is forcing these countries to do what it wants. Everything is headed in the direction of war.”

What nation does China need to be afraid of? How can it justify such massive military buildups in the name of self-defense? China isn’t confronting a threat—it is the threat. With America gone, aggressors like Russia and China are shaping the new global order. America’s absence has permitted Russia and China to rise; soon a European superpower will emerge as well. You can know how this will all play out in incredible detail. Read Mr. Flurry’s article “China Is Steering the World Toward War.”