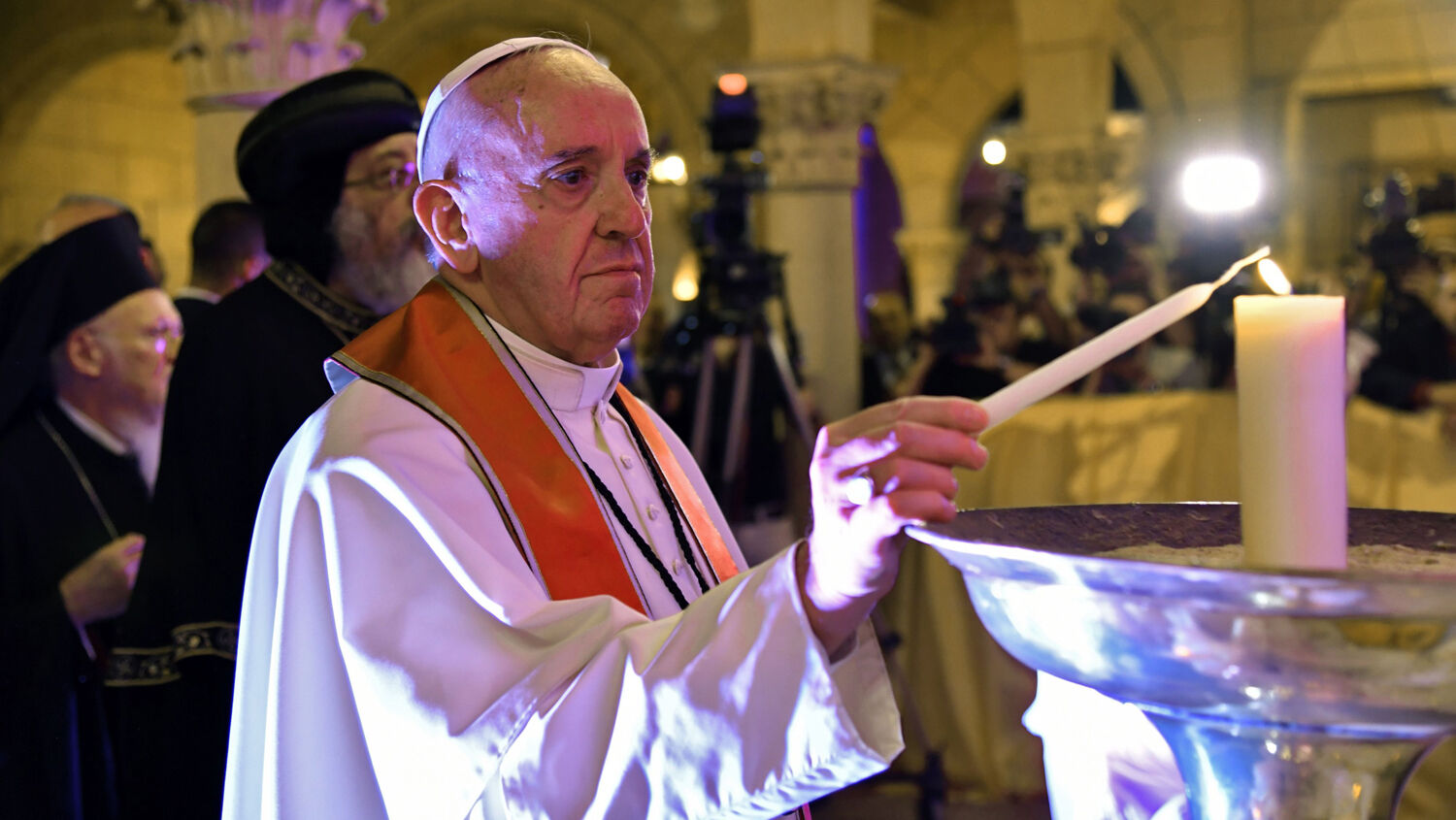 Pope Francis lights a candle during a visit at the Saint Peter and Saint Paul church in Cairo, Egypt.
ANDREAS SOLARO/AFP/Getty Images

As Islamic violence against Christians intensifies, the Coptic Orthodox Church looks to the Vatican for support.

Pope Francis’s recent trip to Egypt was marked by a surprise announcement. In a joint declaration signed on Friday, April 28, Pope Francis and Coptic Pope Tawadros ii agreed that they would not require rebaptism for Roman Catholics who seek to join the Coptic Orthodox Church, and vice versa.

“We, with one mind and heart, will seek sincerely not to repeat the baptism that has been administered in either of our churches for any person who wishes to join the other,” declared the two popes. “This we confess in obedience to the Holy Scriptures.”

This declaration carries special significance. Both Catholics and Copts teach that a person can only be baptized once. Requiring someone to be rebaptized implies his or her original baptism was invalid. Recognizing a shared baptism implies a belief that both churches are part of one body, regardless of lingering doctrinal differences.

This declaration comes 44 years after Pope Paul vi met with Coptic Pope Shenouda iii in 1973—the first meeting between a Catholic and Coptic pope since the two churches officially split in a.d. 451.

This breakthrough in ecumenical relations came just three weeks after 47 Coptic Christians were killed in two terror attacks in northern Egypt. Before signing the joint declaration on baptism, Pope Francis visited a church bombed by Islamic terrorists and issued a statement assuring Pope Tawadros that Catholics share the Coptic people’s suffering. The majority of Egypt’s 9 million Christians belong to the Coptic Orthodox Church. Relations between the Catholic Church and the Coptic Church have improved dramatically over the past several years as both churches have faced a rising threat from Islamic extremism across the Middle East and North Africa.

“Today, there’s the ecumenism of blood,” Pope Francis told an Italian reporter in December 2013. “In some countries they kill Christians because they wear a cross or have a Bible, and before killing them they don’t ask if they’re Anglicans, Lutherans, Catholic or Orthodox. The blood is mixed. For those who kill, we’re Christians. We’re united in blood, even if among ourselves we still haven’t succeeded in taking the necessary steps toward unity and perhaps the moment hasn’t arrived. Unity is a grace that we have to ask for.”

The Prophet Daniel recorded in Daniel 11:40 that the return of the Messiah would be preceded by a colossal clash of civilizations. The scripture reads, “And at the time of the end shall the king of the south push at him: and the king of the north shall come against him like a whirlwind, with chariots, and with horsemen, and with many ships; and he shall enter into the countries, and shall overflow and pass over.”

In his free booklet The King of the South, Trumpet editor in chief Gerald Flurry explains that the king of the south refers to a radical network of Islamic terrorism led by Iran. The king of the north is a German-led superstate now being built in Europe that will operate under the overarching influence of a great false church.

In a separate prophecy, recorded in Isaiah 47, God foretells that this great false church would wield supreme power, boasting that she will not know “the loss of children,” or daughter churches. This prophecy prompted Herbert W. Armstrong to state with absolute certainty, more than 40 years ago, that Protestant and Orthodox churches would gravitate toward unification with mother Rome.

Today, we are witnessing how the “push” of Daniel 11 is leading the reunification of Isaiah 47. As Islamist governments take root across the Middle East, most of the region’s Christians will soon turn en masse, not to God, but to Rome and a European bloc dominated by the Vatican.