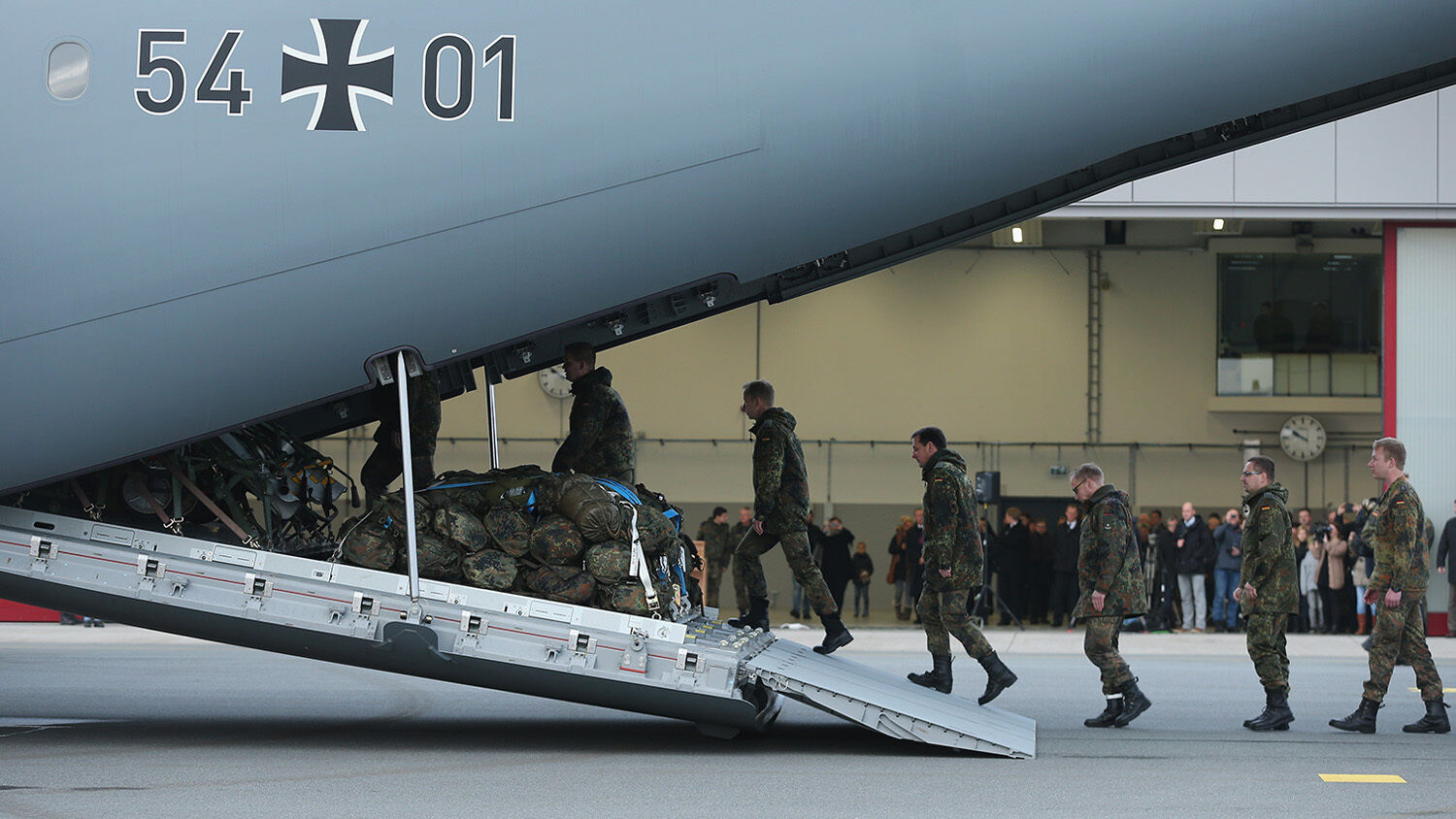 Forty members of the Bundeswehr, the German armed forces, board plane for Syria on December 10, 2015 in Jagel, Germany.
Sean Gallup/Getty Images

German Defense Minister Ursula von der Leyen has called for the United Nations to send a mission to Syria once the civil war is over. The defense minister’s comments came during an interview with Die Welt am Sonntag, published on April 16. “If we really want security for those of us in Europe and in our immediate neighborhood, we also need to be willing to give the structures, in which we trust, the appropriate means to act,” she said (Trumpet translation throughout). Von der Leyen offered the support of German soldiers in the possible UN-led peacekeeping mission.

One of the most threatening situations that Europe currently faces is the civil war in Syria.

The United States recently increased its own involvement in the conflict with air strikes on a Syrian air base on April 6, and it expects Europe to follow. Prior to the air strike, United States Secretary of Defense James Mattis informed the German defense minister about the goal of the strike.

The German Ministry of Defense is on the same page with the U.S. and hopes for a political solution to solve the crisis. But beyond that, von der Leyen said, the UN must protect the Syrian citizens from further conflicts. This appears to be the only way that all the involved parties can come together. Concerning Russia, she said:

The Russians assumed much responsibility. They are beginning to realize that they are also responsible for the rebuilding of the region that lies in ruins, especially around Aleppo. That will cost many billions. That is why it is also in the Russians’ interest to find a peace solution and to organize a reconstruction project under the umbrella of the United Nations, in which all must participate—our help will also be demanded. It is also clear that Russia will not be able to accentuate its interests with Iran and [Bashar] Assad in Syria without restraint.

When asked about Germany’s possible involvement in Syria, von der Leyen said that Germany’s position becomes more important as it fulfills more expectations. As part of the UN mission, Germany will be able to contribute to all aspects of the country’s future stabilization, including humanitarian, economic and security policy.

Like America, von der Leyen holds Assad responsible for the latest use of chemical weapons against the civilian population at Khan Shaykhun on April 4. She and many other German politicians demand a future without Assad.

Bible prophecy forecasts that Germany will get involved in Syria and the nation will ultimately ally itself with Europe. On August 2012, Trumpet editor in chief Gerald Flurry wrote about the future of Syria, saying that although Germany restrained itself from getting involved in the Libyan conflict, it would likely send troops to Syria. He wrote:

One of Germany’s primary objectives in this region is to develop an axis with Middle Eastern states that oppose Iran. Germany has been stepping up its political involvement and its financial and military investment in Saudi Arabia and other Gulf states, Turkey, Lebanon and Jordan. It has formed solid trade relationships with virtually all these countries, covering many industries from telecommunications to the military.

Germany will respond to the increased U.S. demands and will become more involved in Syria, but only to serve its own purpose. What we see in the Middle East and in Europe today is developing toward the situation described in a prophecy in Psalm 83. Speaking about the end time, this prophecy describes exactly who Germany will ally with as it confronts Iran. Syria has been and is currently allied with Iran, and Assad opposes Europe. But the current civil war, and possible imminent UN intervention could change this very soon. Whenever the Syrian civil war reaches its conclusion, watch how Europe involves itself in the aftermath—especially Germany.