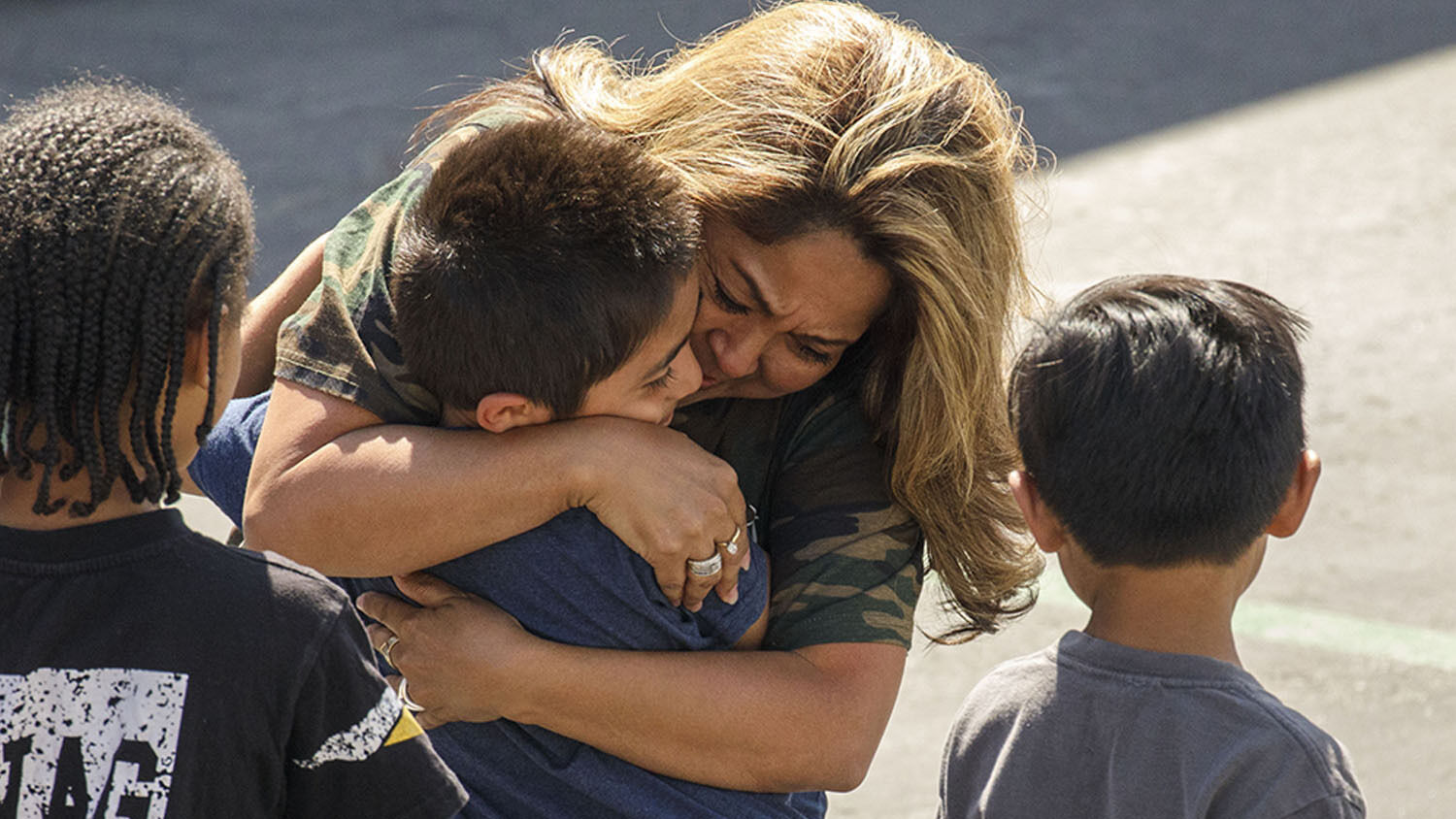 The United States suffered its 121st mass shooting of the year on Monday. In a special education classroom at North Park Elementary School in San Bernardino, California, a 53-year-old man opened fire on his estranged wife, Karen Smith, and her students. After killing his wife and injuring two students, Cedric Anderson shot and killed himself. One of the injured students, 8-year-old Jonathan Martinez, later died at a local hospital.

Police do not believe the children were targeted, but were struck by bullets as they hid behind their teacher.

Anderson had been accused of domestic violence multiple times before the mass shooting. One previous girlfriend accused him of threatening her with a butcher knife and trying to suffocate her with a pillow, according to court papers. Smith left her husband last March, after only two months of marriage. Anderson tried to persuade his wife to return by making multiple violent threats against her, according to Smith’s family.

Police say Smith was concerned by her husband’s behavior, but thought he was only seeking attention. The employee who showed Anderson where Smith’s classroom was located did not know the couple was separated until after he fired off 10 shots with a .357 caliber revolver.

This shooting was the 121st mass shooting of 2017, according to Mass Shooting Tracker, a crowd-sourced website that defines a “mass shooting” as an incident of gun violence in which four or more people are shot.

The revolver that Anderson used to commit this crime was sold in Michigan in 1979. No further records for the gun are available. California has strict gun registration laws, including universal background checks, a 10-day waiting period on gun purchases, a ban on “high-capacity” magazines, a “good cause” requirement for issuance of concealed carry permits, and gun confiscation laws based on mental health records. Yet none of these laws were able to stop Anderson from murdering his wife and an 8-year-old child before killing himself.

In modern-day America, three women are murdered every day by a current or former romantic partner. At least a third of all women murdered in the United States are killed by male intimate partners. Approximately 18,000 women have been killed in incidents of domestic violence since 2003. Roughly 55 percent of these murders were committed with a gun; about 45 percent were committed using some other type of weapon.

Some 40 million American adults grew up with domestic violence. Statistics show that those who grow up in such conditions are 74 percent more likely to commit a violent crime themselves, perpetuating a deadly cycle.

Strong, stable families are the foundation of strong, stable societies. So how can a nation lacking so much natural affection ever survive?

The Bible addresses not only the laws of morality that make families strong, but also specific forecasts of future events. In the aftermath of what happened in San Bernardino, one of these prophecies sounds startlingly familiar: “This know also, that in the last days perilous times shall come. For men shall be lovers of their own selves, covetous, boasters, proud, blasphemers, disobedient to parents, unthankful, unholy, Without natural affection, trucebreakers, false accusers, incontinent, fierce, despisers of those that are good” (2 Timothy 3:1-3).

“We hear about all kinds of abuse today,” Trumpet editor in chief Gerald Flurry writes in his free booklet No Freedom Without Law. “But abuse within the family is far more damaging than any other. It is harder for the victims to recover. Such abuse has far-reaching consequences, which most people do not understand. The physical family is a God-plane relationship. … That is why the god of this world, Satan, works so hard to cause people to hate God’s government. Without God’s loving government, marriages and families disintegrate.”

The moral laws revealed in the Bible bring peace, happiness and freedom when followed. It is because society rejects and mocks these laws that mass shootings, domestic abuses and bloody crimes continue and worsen.