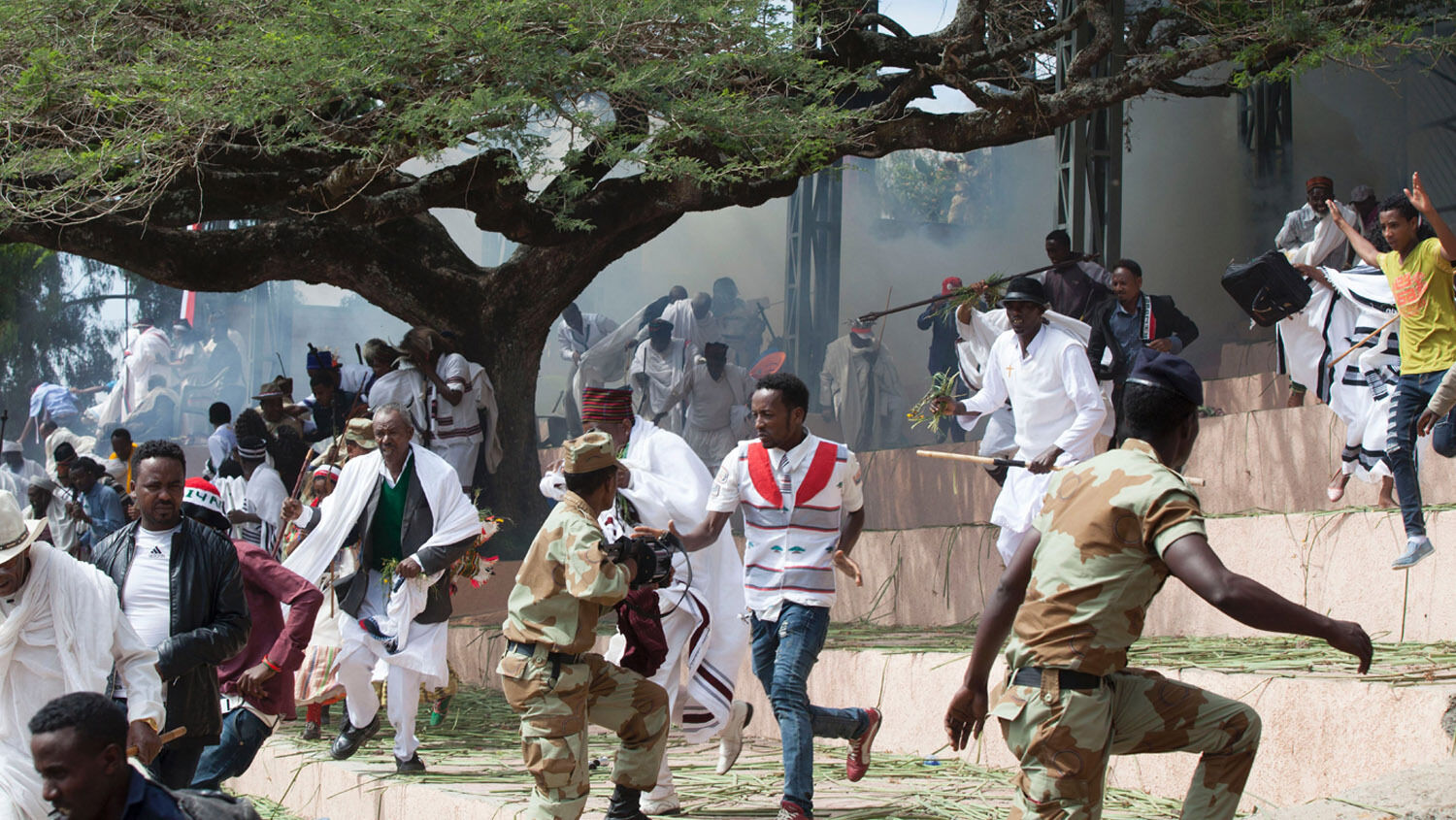 This desperate measure is revealing the true state of the nation—and its future.

The Ethiopian government announced March 30 that its state of emergency would be extended for another four months, amid concerns of renewed violence.

Ethiopia originally declared the state of emergency on October 9 after antigovernment protesters attacked foreign-owned factories and killed an American student. The government blamed foreign-backed militias for the unrest, singling out rivals Egypt and Eritrea as the chief enablers. Some antigovernment activists, however, said Ethiopian protesters acted independently to “paralyze the economic muscle of the regime.” They accused the government and its security forces of human rights abuses and heavy-handedness, which include alleged indiscriminate killing of protesters.

Just a week before the state of emergency was enacted, government forces had fired rubber bullets and tear gas at protesters at a cultural festival, triggering a stampede that killed 52 people according to government figures. The opposition estimates that the chaos killed around 600 people.

The state of emergency further empowered the government forces. It authorized the military to restrict travel, enforce curfews, search premises, and detain people without warrants.

“The regime has imprisoned, tortured and abused 20,000-plus young people and killed hundreds more in order to restore a semblance of order,” said Alemante Gebre-Selassie, emeritus professor of the College of William and Mary in Virginia.

Defense Minister Siraj Fegessa said Ethiopia remained under the threat of “some people who occasionally strive to disrupt peace and security.”

Who exactly are those people striving to disrupt Ethiopia’s peace and security?

The Ethiopian government has publicly named Egyptians and Eritreans as regional saboteurs. There is yet another regional saboteur that is notorious for exporting terrorism and grabbing strategic areas of the region: the Islamic Republic of Iran.

Iran has allied itself with the Somali Mujahideen “youth” movement known as al-Shabaab, which has persistently terrorized East Africa and the Horn of Africa. Iran has also allied itself with Yemen’s Houthi rebels, who are separated from Ethiopia only by the Red Sea and a narrow strip of Eritrea.

A prophecy in Daniel 11:40-43 mentions Ethiopians by name. It also mentions Iran by the name “king of the south” and a European empire by the name “king of the north.” Our free booklet The King of the South explains this prophecy in great detail. Our free special report titled “Libya and Ethiopia in Prophecy” documents all of the major trends in North and East Africa and shows how they align with Bible prophecy.

The prophecy reads, “And at the time of the end shall the king of the south push at him: and the king of the north shall come against him like a whirlwind, with chariots, and with horsemen, and with many ships; and he shall enter into the countries, and shall overflow and pass over. … But he [the king of the north] shall have power over the treasures of gold and of silver, and over all the precious things of Egypt: and the Libyans and the Ethiopians shall be at his steps” (Daniel 11:40, 43).

Every word in God’s inspired Bible has significance. God placed two nations in the same verse as Egypt for a definite reason. This verse states that Libya and Ethiopia are also going to be closely allied with Iran! … So you need to watch Libya and Ethiopia. They are about to fall under the heavy influence or control of Iran, the king of the south. That is why they are subdued in the king of the north victory.

Whoever heavily influences or controls Ethiopia will undoubtedly also control the small areas of Eritrea and Djibouti on the Red Sea coastline. These areas only recently became independent of Ethiopia. …

You need to continue to watch for Libya and Ethiopia to make a severe and rapid turn into the radical Islamic camp.

Compare his statements with this one from April 4 of this year, from ihs Jane’s Country Risk Daily Report: “[The] extended Ethiopian state of emergency will continue to suppress protest risk, but likely to increase terrorist attack risk.”