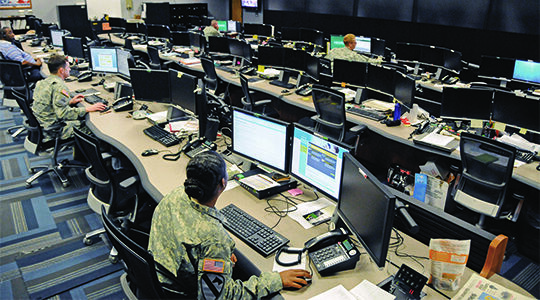 Russia and China both now have the capacity to carry out critical cyberattacks on other nations that is significantly ahead of American capacity to defend against such attacks, a new government report says.

The report from the United States government’s Defense Science Board Task Force on Cyber Deterrence was based on a two-year analysis. It says:

The United States gains tremendous economic, social and military advantages from cyberspace. However, our pursuit of these advantages has created extensive dependencies on highly vulnerable information technologies and industrial control systems. As a result, U.S. national security is at unacceptable and growing risk. Over the past several years, the United States has been subjected to cyberattacks and costly cyber intrusions by various actors ….

Some examples of such attacks have been China’s ongoing cybertheft of the intellectual property of American companies, and Russia’s hacking and publishing data from various American organizations in an effort to erode confidence in the U.S. political system.

The report says such incidents as these stand out from the constant onslaught of cyber intrusions assailing the U.S. on a daily basis because “their impact goes beyond data collection, to impose some form of harm on the United States.”

The report, published on February 23, continues:

[M]ajor powers (e.g., Russia and China) have a significant and growing ability to hold U.S. critical infrastructure at risk via cyberattack, and an increasing potential to also use cyber to thwart U.S. military responses to any such attacks. This emerging situation threatens to place the United States in an untenable strategic position. Although progress is being made to reduce the pervasive cyber vulnerabilities of U.S. critical infrastructure, the unfortunate reality is that, for at least the next decade, the offensive cyber capabilities of our most capable adversaries are likely to far exceed the United States’ ability to defend key critical infrastructures.

Secondary powers such as Iran and North Korea also have a “growing potential’” to use native or third-party cyberweapons to execute “catastrophic attacks” on American infrastructure, according to the document.

Perhaps the most chilling sentence of the 44-page report concerns the threat posed specifically to America’s cyber-dependent military infrastructure: “The U.S. military itself has a deep and extensive dependence on information technology as well, creating a massive attack surface.”

Defense Science Board chairman Craig Fields said he expected the gap between America’s defenses and its vulnerability to only grow wider: “[T]he cyberthreat to U.S. critical infrastructure is outpacing efforts to reduce pervasive vulnerabilities,” he said. “[A] more proactive and systematic approach to U.S. cyberdeterrence is urgently needed.”

Back in June of 1999, Trumpet editor in chief Gerald Flurry warned about “America’s Achilles’ heel”—meaning its dependence on technology coupled with the vulnerability of its computer-based systems.

He put this vulnerability in the context of recent history:

One of the main reasons we won World War ii was because the British broke German radio code. We knew about most of their war plans in advance! Quite a gigantic advantage. Some experts think we would have lost the war without that knowledge. We could lose the next war before we even begin, if somebody breaks our military codes.

The new Defense Science Board report shows that Mr. Flurry’s assessment was spot on, and that the U.S.’s “Achilles’ heel” is now more vulnerable than ever to attacks by Russia, China and others. To understand the details about why this is such an alarming reality, read “America’s Achilles’ Heel.”