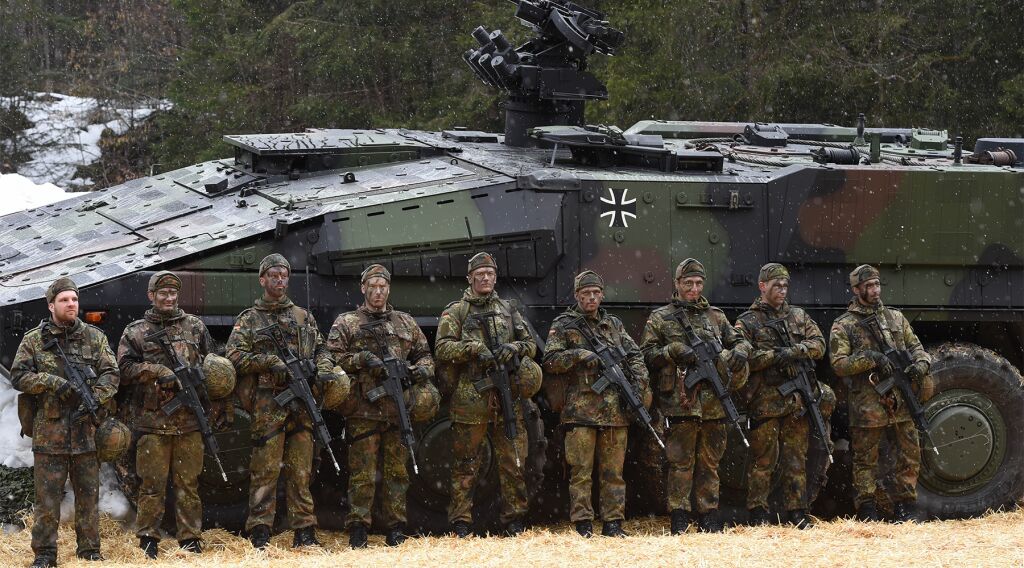 Even a modest boost to German defense spending means radical changes to the world order.

Germany will boost the size of its military to nearly 200,000, hiring an additional 20,000 soldiers by 2024, Defense Minister Ursula von der Leyen announced on February 21.

Germany had already announced plans to increase its army to 193,000 by 2023, so this is merely an incremental increase compared to earlier plans. However, it does confirm the radical change in direction for Germany. Its army had shrunk to a low of 166,500 last June and has only just begun turning around. Now, each new announcement about the German military is an increase.

The government has also announced that it plans to increase its military spending to 2 percent of its gross domestic product by 2024.

Von der Leyen’s statements come shortly after the Munich Security Conference where American leaders once again called for Europe to spend more on its militaries.

Few appreciate what a massive shift this would mean for Europe. In an article titled “Should Europeans Spend More on Defense?”, Dalibor Rohac wrote for the EU Observer:

Yet there is also a dark side to a hypothetical beefing-up of Europe’s militaries. America’s dominance of nato, and Europe’s apparent free riding, has brought one significant benefit. Namely, there has been a taming of the regional rivalries that had long existed between European countries and had periodically devastated the Continent. If land warfare between Europe’s democracies has become unthinkable, this is to say that it is unthinkable primarily in the literal, practical sense. There is no capacity to fight any such war: not enough men in uniforms, tanks, guns or airplanes.A Europe that takes care of its own security without “free riding” on the United States would likely see traditional rivalries return. For instance, by bringing its defense spending a bit above 2 percent of gdp, Germany would outspend Russia and become the fourth-largest military power in the world.

This trend could result in Europe developing its massive military potential. Already nato’s European members spend five times more on defense than Russia, and Russia has been able to accomplish quite a lot with its armed forces. Add a little more spending, a bit more military cooperation and especially a strong leader willing to use the force that already exists, and Europe can very quickly become a major power.

When Germany spends 2 percent of gdp on its military, it will be even more dominant within the European Union. Once von der Leyen’s plans are complete, the German army would be slightly larger than the British armed forces are right now. Rohac continued in his article:

Some have blamed Germany, rightly or wrongly, for imposing austerity on economies in the eurozone’s Mediterranean periphery. Central European countries such as Hungary or Slovakia, in turn, soured to Berlin’s leadership following Chancellor Angela Merkel’s “welcome” extended to Syrian asylum seekers in September 2015.These disputes might have been heated, but they were still largely amicable. But what would the standoff over Greek debt or the EU’s asylum policies look like if Germany were not just an economic powerhouse but also wielded real military might? How would it shape the country’s relations with the Czech Republic, which expelled 2.5 million ethnic Germans from the Sudetenland after World War ii? And what about with Poland?[I]f Europeans are to spend more on defense, they need be careful to do it in a way that does not resuscitate the Continent’s old demons.

Even Germany’s foreign minister, Sigmar Gabriel, raised similar concerns. “One has to ask whether it would really calm Germany’s neighbors if we turned into a big military power in Europe and … spent over €60 billion (us$64 billion) a year in weapons,” he said. “I have my doubts.”

Yet this is the road Germany is inexorably forced along. Since Germany can no longer rely on the United States for its defense, it seems Berlin has no choice but to re-arm once again. Yet few are really thinking through these radical changes and whether they will make the world safer or much more dangerous. For where this post-American world is leading, see our article “The World’s Next Superpower” or listen to the Trumpet Daily Radio Show episode “Finally, Someone Else Warns That a Rearmed Germany May Not Be a Good Idea.”