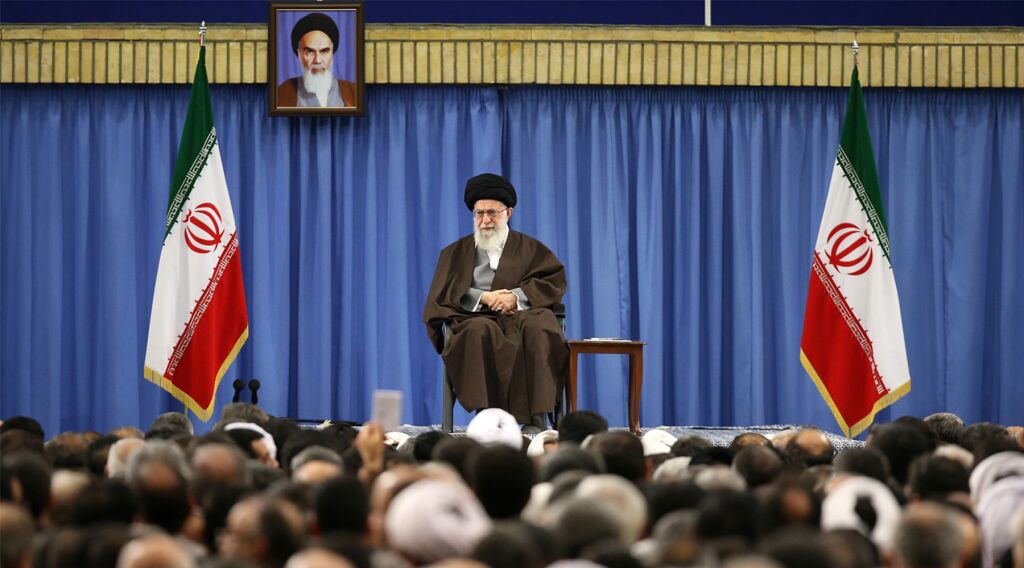 In a world where leaders rarely say what they mean, Iran’s supreme leader says exactly what’s on his mind.

JERUSALEM—It can be easy to allow the frequent Iranian diatribes against Israel to become cliché. Especially when headlines such as “Iran’s Supreme Leader Backs Holy Intifada to Destroy ‘Cancer’ Israel” or “Israel Is a ‘Cancerous Tumor,’ ‘Fake Nation’” appear so regularly in the news, as they did this week. This type of rhetoric from the Iranian regime has been used so often and for so long that we might be lulled into believing they are mere words. After all, after years of such hateful threats, Israel still exists.

However, every so often, it’s good to remember: This is not just rhetoric: the Iranians really do believe what they say. This is not mere hyperbole; the regime does believe in the destruction of the Jewish state. It really does believe that Israel is a cancerous tumor that it must literally remove from the Middle East. It really does believe that Israel needs to be wiped off the map. The only reason this has not happened already is not because Tehran lacks the will, it only lacks the means.

Here is what Iranian Supreme Leader Ayatollah Ali Khamenei said in the opening speech to the sixth international conference in support of the Palestinian intifada, an event that began on Tuesday in Tehran.

Bear in mind that this isn’t just a regular conference giving support to Palestinian statehood in some future peace deal with the Israelis, but rather a conference that specifically promotes the intifada, an unambiguously violent Palestinian uprising against the Jewish state, after which Israel would cease to exist. This isn’t a peace conference, but a literal death-to-Israel conference, and one whose speakers included all the top brass in Iran, including its three most powerful men: “moderate” Iranian President Hassan Rouhani, Iranian parliament speaker Ali Larijani, and the aforementioned supreme leader.

As we highlight some of Khamenei’s comments, remember that, while we in the West might cast him aside as a crazy, this is a leader of a nation of 80 million people (and millions more Shiites across the Middle East), a leader who desires nuclear weapons. His opinion and goals cannot be so easily cast aside. The full speech is completely translated into English, unabashedly so, on Khamenei’s own website. Here are some excerpts (emphasis added throughout):

The history of Palestine is full of ups and downs, marked by the cruel occupation of that region, the rendering of millions of individuals homeless, and the courageous resistance of those heroic people. An intelligent quest in history shows that no people in any era of history have ever been subject to such pain, suffering and cruelty.

There are likely many historians who would take exception to the idea that the Palestinians have suffered more than all other people. Take the Jews themselves, for example, 6 million of whom were systematically exterminated just over 70 years ago.

Next, Khamenei lamented the fact that turmoil in the Arab world has undermined its collective focus on liberating Jerusalem. Those conflicts and civil wars (like Yemen, Syria and Libya) were blamed on Israel and its allies as a way of deflecting attention from the Jews.

Your conference is being held under one of the most difficult circumstances in the world and in the region. These days, our region—which has always supported the people of Palestine in their fight against a global plot—is undergoing numerous upheavals and crises. The existing crises in several Islamic countries in the region have caused the support for the issue of Palestine and the holy ideal of Quds’ [Jerusalem] freedom to be undermined. Attention to the result of these crises helps us to understand which powers benefit from the existence of these crises.Those who created the Zionist regime in the region with the purpose of hampering the stability, solidity and progress of the region through imposing a long-term conflict are behind the seditions that exist in the present time as well. These are seditions that have culminated in the capabilities of regional nations being used to foil one another because of engagement in futile and meaningless conflicts.When all these capabilities are ruined, the ground will be prepared for strengthening the usurping Zionist regime on a daily basis. … But unfortunately, the complicated plots of the enemy have managed to impose civil wars on nations by benefiting from the negligence of some governments.

Khamenei then called on all Muslims across the Middle East to refocus on Jerusalem as the unifying factor between them all. He also noted the international community is moving toward a confrontation with Israel.

Despite the differences that exist among Islamic countries—some of these differences are natural, some originate from the enemy’s plot, and the rest are because of negligence—the issue of Palestine can and should be the pivot of unity for all Islamic countries. One of the achievements of this valuable conference is announcing the first priority of the world of Islam and freedom fighters all over the world, which is the issue of Palestine and the creation of an atmosphere of harmony and unanimity with the purpose of achieving the lofty goal of supporting the people of Palestine and their truthful and justice-oriented fight.The significance of offering political support to the people of Palestine should never be neglected. This issue has a special priority in today’s world. Even if Muslim and freedom-seeking nations have different viewpoints and opinions, they can gather together with one goal, which is Palestine and the necessity to liberate it.With the emergence of signs of the collapse in the Zionist regime and the weakness that has dominated its main allies—in particular the United States of America—it is witnessed that the global environment is gradually moving toward confronting the hostile, illegal and inhuman activities of the Zionist regime. Of course, the global community and regional countries have not yet managed to carry out their responsibilities toward this humanitarian matter.

Khamenei then noted successful history from the previous two Palestinian intifadas, each of which lasted for years and snuffed out the lives of more than 1,000 Israeli civilians and security personnel and more than 4,000 Palestinans—an estimated quarter of whom were killed by other Palestinians. He also encouraged the third uprising of intensifying violence that is currently underway in Israel.

The people of Palestine are proud that Allah the Exalted has given them a great favor by helping them to shoulder the great responsibility of defending this Holy Land and Masjid al-Aqsa. The people of Palestine have no option other than keeping the flames of fighting alight by relying on Allah the Exalted and by relying on their innate capabilities, as they have genuinely done so until today. The intifada that has begun for the third time in the occupied lands is subject to more suppression than the previous two, but it is still moving forward in a bright and hopeful manner. And by Allah’s permission, we will see that this intifada will begin a very important chapter in the history of fighting and that it will inflict another defeat on that usurping regime.From the beginning, this cancerous tumor has been developing in several phases until it turned into the current disaster. The cure for this tumor should be developed in phases as well. Until today, several intifadas and a constant and continuous resistance have managed to achieve very important phased goals. The Palestinian intifada continues to gallop forward in a thunderous manner so that it can achieve its other goals until the complete liberation of Palestine.

After detailing how successful the “war of attrition” against Israel has been since the 1980s and highlighting Israel’s retreats from Gaza and Southern Lebanon, Khamenei drew his attention specifically to the West Bank and the need for unity among Arabs as well as Palestinian factions. This should be especially significant for Trumpet readers, since editor in chief Gerald Flurry has discussed Iran’s desire to strike at Jerusalem through a Hamas-dominated West Bank. In August 2008, he wrote, “The Trumpet has been warning for 15 years that Iran would take over Iraq en route to its becoming the ‘king of the south.’ Its role in biblical prophecy is clear, and today we see events leading to its fulfillment in a truly remarkable way. Now we must ask the question: What piece of territory will Iran conquer next? It will undoubtedly go after the West Bank.”

The dangers originating from the presence of the Zionist regime should never be ignored! The main pivot of the resistance is the steadfastness and endurance of the Palestinian people who have raised courageous and resistant children. Meeting the needs of the Palestinian people and Palestinian resistance is an important and vital responsibility, which should be carried out by all of us.In doing so, we should not ignore the basic needs of the resistance in the West Bank, because the West Bank shoulders the main burden of the suppressed intifada ….

In concluding his speech, Khamenei called upon Allah to help those supporting the violent uprising against the Jews:

I ask God the Benevolent to help all you succeed in serving the issue of Palestine as the most important issue in the world of Islam and as the pivot of unity for all Muslims and all liberated individuals in the world.

Again, Jerusalem and the Jews are the real targets of the current Iranian regime. And given the dedicated majority support Khamenei receives at home, as well as the loyalty of the armed services, there will be no regime change any time soon in Tehran.

As we have forecast for almost three decades, Iran has not only developed into a disturbing regional power, but it has developed into a disturbing regional power that was described more than 1,500 years ago! Iranian-led radical Islam is the “king of the south,” a power bloc forecast in the Bible in Daniel 11:40. This Islamic kingdom is marching across the Middle East and has its eye on taking Jerusalem from the Jews, whose nation was also prophesied in the Bible. This regime is dedicated to the cause described above by its leader. Even though it’s hard for Western minds to fathom, Iran really will not stop until it has conquered Jerusalem.

Yet, before it succeeds in its conquest, prophecy describes another power bloc putting a stop to Iran’s ambitions. That same verse describes the “king of the north,” a superior force projected by Europe—which also wants Jerusalem for its capital.

Why are these powers interested in Jerusalem? To understand, please read Mr. Flurry’s booklet Jerusalem in Prophecy. This booklet describes Jerusalem’s unique history among cities, as well as the coming time when, though it will still command the world’s attention, Jerusalem will finally experience a time of unparalleled peace.