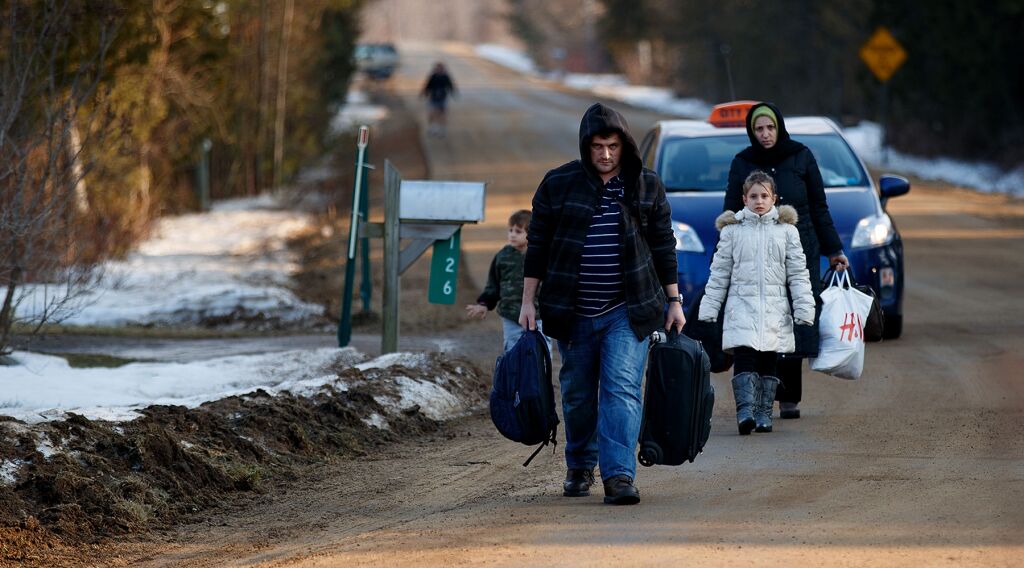 Despite subzero temperatures, mountains of snow, and the risk of deportation, hundreds of illegal immigrants have begun pouring across the United States border into Canada to seek asylum. Desperate individuals and families from the Middle East, Africa and Latin America are giving up on America and have begun to cross the border at rates Canada has never seen before.

While the rate of those seeking asylum in Canada rose from 2015 to 2016, there has been a noticeable spike since the beginning of 2017. abc News reported:

North of the eastern U.S. in Quebec—where Canadian authorities say there’s been the biggest rise in illegal crossings—the number of asylum claims by people who crossed over legally and illegally more than tripled in January 2017 compared to a year earlier, authorities said.In January of this year, there were 452 asylum claims at Quebec’s land border, compared to 137 in the same month in 2016 and 46 claims in January 2015. …Canadian police described the daily crossing numbers as fluctuating, but said in the last six months it’s seen crossings in some areas increase from about one to two people per day up to 19 a day.

These asylum seekers are quickly beginning to overload immigration services. One center that assists migrants in Montreal reported that it had taken in 50 migrants in the first six weeks of 2017; the center usually only serves 20 people per year. In some instances, when an asylum seeker is released after being arrested, he or she temporarily stays at a local ymca facility. However, some ymcas are becoming so crowded that the migrants are being sent to local homeless shelters while they wait for a long-term address.

In one case, an entire town is on the brink of being overwhelmed. In Emerson, Manitoba, a border town of only 700 residents, dozens of asylum seekers have taken refuge since the start of the year, including 19 on February 4 alone. The town is now pleading for federal aid as the local municipality is unable to cope with the influx.

This is quickly becoming a crisis that Canadian border agencies are struggling to handle, though they may not admit it. The Royal Canadian Mounted Police (rcmp) said the surge has required more manpower deployed to certain border areas, but that it is not in “emergency mode.”

However, if more manpower has to be deployed now, in the middle of winter, what is in store once summer comes around? The warmer temperatures could encourage even more people to cross illegally. The Toronto Star reported:

[D]espite the heartwarming photos of police officers helping with young children, or offering an arm to negotiate the slippery snowbanks, it appears that the status quo is starting to stress Canada’s border protection and refugee-intake system.From corporals to a staff sergeant to an inspector, the Mounties who spoke to reporters during a media tour [February 20] were too stoic to admit such a thing. But Brad Cutris, an acting division chief with the U.S. Border Patrol said it loud and clear from the American side of the border in response to questions lobbed at him a few feet away in Canada.”A solution would be great,” he said.”Like what?” a Radio-Canada journalist asked, while teetering on the snowy bank of a creek running between the two countries.”I wish I knew, ma’am. I’m not a policymaker.”

After watching this trend quickly spiral out of control, policymakers did announce their solution earlier this week. Even though the services to help these asylum seekers are overloaded, Canadian Prime Minister Justin Trudeau announced on Tuesday, February 21, that he would continue to accept these illegal immigrants. Following the lead of other liberal democracies plagued with illegal immigration, Canada has effectively thrown the doors wide open.

By accepting these asylum seekers, though, Mr. Trudeau is undermining Canadian law. Canada currently has an agreement in place with the United States called the Safe Third Country Agreement. This agreement states that if an individual has already applied for asylum in the U.S., he or she cannot apply for asylum in Canada as well. If an asylum seeker tried to claim asylum at a legal border crossing, he or she would be turned away. The agreement is meant to prevent “asylum shopping.” However, there is a loophole in the agreement, which these illegal immigrants are taking advantage of. If someone illegally crosses into Canada, he can legally apply for asylum when he is caught. He is simply detained for a few days before being let go to await the asylum process.

Trudeau’s pledge to accept these illegal immigrants actually encourages people to illegally enter Canada. Refugee advocates recognize that, so they are pressuring the Canadian government to simply abandon the agreement so that asylum seekers don’t have to risk injury or death by entering illegally. Some even reason that Canada must abandon the agreement because the U.S. is no longer safe for refugees now that Donald Trump is president.

This solution is essentially the same as those implemented in America and Europe in response to their immigration crisis. While it may seem right and good to the liberal-minded leaders in Ottawa to do whatever is necessary to help these people, this really is an incredibly dangerous message to send to those illegally entering Canada or considering it. It tells them that they are above the law. In essence, it tells them that they can do whatever they need to do to make it in Canada, that the law doesn’t apply to them, or that they can break certain ones if and when it is convenient. How can they learn to respect the rule of law when their first experience with Canada is benefiting from breaking the law—when their residency in this country and participation in its laws are literally founded on law-breaking?

Canada now faces potential problems from its own sanctuary cities. The day before Mr. Trudeau made his announcement, the city of Montreal, located only a few hours from the entry points for the majority of these illegal immigrants, unanimously voted to become a sanctuary city. It now joins the growing list of other sanctuary cities in Canada, including Toronto and Vancouver. Montreal is now free to operate in similar fashion to the sanctuary cities in America, which have become notorious for harboring illegal immigrants from deportation. This is a clear message to the Canadian government, which is already staunchly liberal, that should the Trudeau government somehow choose to better enforce federal immigration law, it will resist him.

Rather than learn from its neighbor to the south, Canada is quickly headed down the same path America took when it was overwhelmed by a surge of illegal immigrants during the summer of 2014. President Barack Obama chose not to enforce the immigration laws that his office is in charge of enforcing and, instead, threw open the doors. Three years on, illegal immigration and its effects have bitterly divided the nation.

Do we Canadians think the same thing can’t happen here? We are already divided on these issues. A recent survey from the Angus Reid Institute in Vancouver found that 40 percent of Canadians already feel that Canada is accepting too many refugees. Another 25 percent want to see the Canadian government enact a travel ban similar to the one signed by President Trump. With figures like this, it’s easy to see how Canada could end up plagued with the same division and subsequent violence that America is currently suffering.

At the height of the immigration crisis back in 2014, the Trumpet warned of deadly dangerous consequences. Trumpet executive editor Stephen Flurry wrote:

Lax immigration policies and weak borders are helping to fulfill the Bible’s prophecies! The flood of illegal immigrants highlights a fundamental disregard for law. It exposes and exacerbates the loss of a common culture. America’s inability to protect its borders shows that the very things that define the United States as a nation are being chipped away.God said this would happen! Even well-known commentators who disregard these prophecies or who reject America’s biblical identity can see that we are on a disastrous course. America is splitting apart at the seams.

In Canada, the situation is so much worse in some ways because we sacrificed common culture years ago in the name of multiculturalism. By accepting these illegal immigrants, Canada is setting itself on course to experience the same division, hostility and problems America has. This is something the Trumpet has warned about for years. To learn more, read “Balkanizing Canada.”