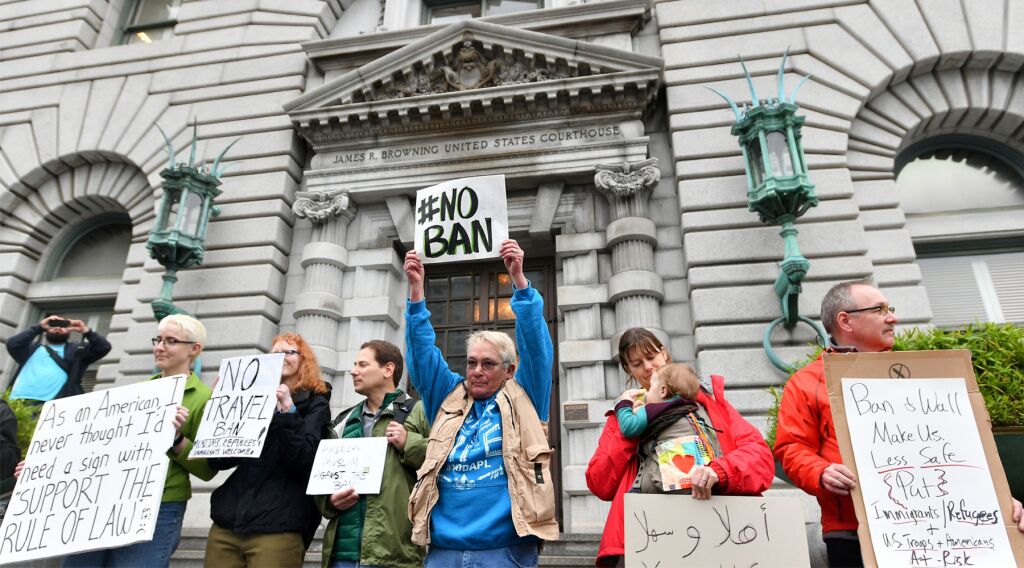 The Ninth Circuit Court of Appeals recently committed a dangerous act of judicial overreach. After the states of Washington and Minnesota sued United States President Donald Trump on January 30 for an executive order temporarily restricting the flow of refugees from seven countries known for exporting jihadists, District Court Judge James L. Robart struck down the president’s order with a restraining order of his own. The judge’s February 9 order bars enforcement of President Trump’s travel ban anywhere in the U.S. until the Trump administration proves there is an actual terrorist threat from Iran, Iraq, Libya, Somalia, Syria, Sudan and Yemen.

Judge Robart is wrong about the lack of a terrorist threat from the seven countries subject to the president’s order. According to Charles Kurzman, a University of North Carolina sociology professor, 23 percent of Muslim-Americans involved with extremist plots since the September 11 attack on the World Trade Center have had family backgrounds from at least one of the seven countries subject to the travel ban.

Even if Robart had been correct, however, his ruling would still have been a dangerous act of judicial overreach. It is the responsibility of the courts to rule whether or not it is legal for a president to temporarily suspend immigration. It is not the responsibility of the courts to second-guess the president’s judgment by deciding whether a particular threat is real in the first place.

“A 1952 federal statute permits the president to suspend the immigration status of any person or group whose entry into the United States might impair public health or safety or national security,” wrote Judge Andrew Napolitano in an article for Reason. “Trump exercised that authority in accordance with the 1952 law when he signed his January 27 order banning all immigration from the seven named countries.”

It is undisputed that America’s president has the legal authority to temporarily ban certain immigrants from entering the country in the face of a national security threat. In fact, President Trump’s six predecessors, including former President Barack Obama, also used their executive power to temporarily ban certain groups of immigrants from entering the country. What is really at stake in this legal dispute between President Trump and Judge Robart is who gets to decide which immigrants pose a national security threat. Is it the president of the United States, who receives a daily security briefing and is in charge of enforcing laws? Or is it any federal judge who thinks the president’s assessment is flawed?

Federal courts are supposed to respect the separation-of-powers doctrine, which grants Congress and the president exclusive authority to regulate immigration and conduct foreign policy. As Judge Napolitano pointed out, Congress has granted the president the power to temporarily “suspend the immigration status of any person or group whose entry into the United States might impair public health or safety or national security.” The recent ruling by the Ninth Circuit is a judicial coup d’état against the executive branch’s constitutional authority to conduct foreign policy.

For the past several years, the radical left has undermined the rule of law in America. When it has controlled the executive office, it has used executive overreach. Now that the Democratic Party has lost control of Congress and the presidency, it will have to increasingly resort to liberal judges and judicial overreach to advance its radical agenda, which includes keeping America’s borders as open as possible.

In 2001, Trumpet editor in chief Gerald Flurry published No Freedom Without Law. In the second chapter of this booklet, “Justice and Our ‘Evolving Constitution,’” Mr. Flurry writes:

Of course the Constitution is not perfect and needs a little fine-tuning at times. But if we do more than that, we are tearing down the very foundation of our Republic! … [T]oo many of our people want an evolving Constitution and law. … [Our leaders] like an “evolving Constitution,” which places more trust in human reasoning than law. It is a dangerous recipe for disaster. … Our people are being led into more and more lawlessness. Human nature hates law. Events tend toward catastrophe unless law keeps us in check. Our forefathers understood human nature and law far better than we do today.The only perfect law is God’s. The framers of America’s Constitution founded much of that document on God’s law as they understood it. … Proper judgment must always include law. That is why it is so crucial that judges not change the righteous law or reject it.

On Mr. Flurry’s June 4, 2009, Key of David television program, he said, “If we as a people don’t obey the rule of law, then we fall victim to the rule of man. This leads to the horrifying rule of brute force.”