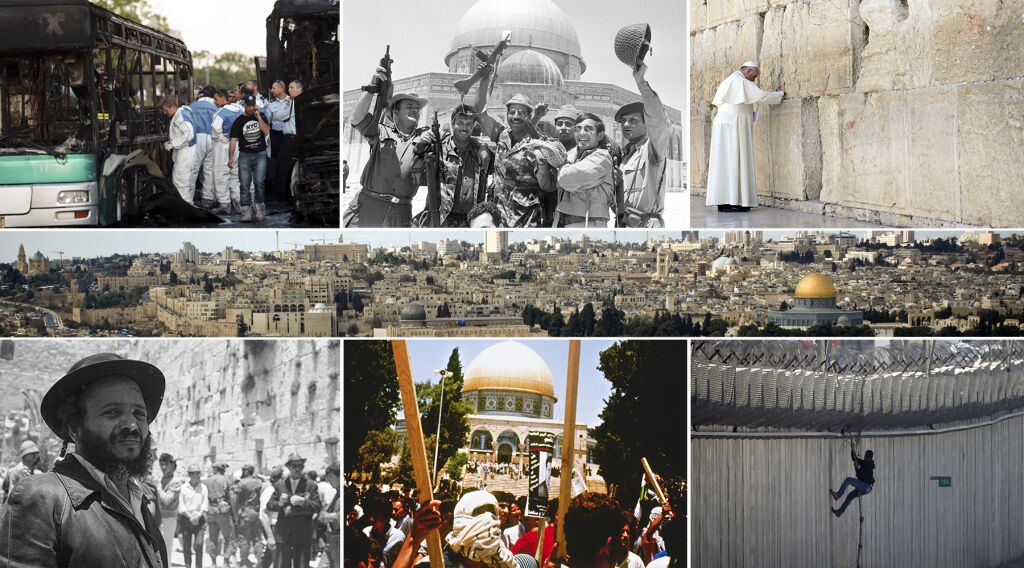 This year marks the 50th anniversary of the Six-Day War. Over several turbulent days in 1967, the tiny Jewish state of Israel defended itself against three Arab armies simultaneously. The Jews not only survived, but by the war’s abrupt end, they had taken possession of the Sinai Peninsula from Egypt, the Golan Heights from Syria, and the West Bank from Jordan, expanding Israel’s territory by 300 percent. At the time, many Jewish leaders and foreign journalists alike recognized this as a miraculous victory.

The most symbolic and emotional moment of the war for the Jews occurred on the third day, when Israeli Army Chaplain Rabbi Shlomo Goren gathered soldiers before the Western Wall to blow the shofar at Judaism’s holiest site. The solemn blast announced to the world that the Jews had captured the Old City and the Temple Mount. For the first time in almost 2,000 years, Jerusalem was united under Jewish rule.

Entering 2017, more attention is being focused on Jerusalem than any year in recent memory.

On Dec. 23, 2016, the United States broke with its traditional role as Israel’s protector at the United Nations Security Council (unsc) by choosing not to veto a resolution that calls Israeli communities in the West Bank illegal and invalid. The resolution, however, has a more sinister clause than most previous attempts to impugn Israel’s claims over the territory it won in the 1967 war.

Resolution 2334 attacks Israel’s control of and sovereignty over not just the territory of the West Bank, but over Jerusalem itself.

Notice the first three points of the resolution. They say that the unsc (emphasis added):

1. Reaffirms that the establishment by Israel of settlements in the Palestinian territory occupied since 1967, including East Jerusalem, has no legal validity and constitutes a flagrant violation under international law and a major obstacle to the achievement of the two-state solution and a just, lasting and comprehensive peace;

2. Reiterates its demand that Israel immediately and completely cease all settlement activities in the occupied Palestinian territory, including East Jerusalem, and that it fully respect all of its legal obligations in this regard;

3. Underlines that it will not recognize any changes to the June 4, 1967, lines, including with regard to Jerusalem, other than those agreed by the parties through negotiations ….

Why single out Jerusalem in the resolution? Why not just mention the West Bank, or the more general term of the “territories” as in previous resolutions?

Because the real target of this resolution is the unity of Jerusalem.

According to the unsc—which is the closest thing this planet has to a world government—Israeli rule over East Jerusalem “has no legal validity and constitutes a flagrant violation under international law.”

In each of these three points, the resolution draws specific attention to East Jerusalem, not just the West Bank. East Jerusalem of course is technically part of the West Bank, but all previous negotiations between Israel and the Palestinians, such as the Oslo Accords in the 1990s and the Camp David Summit in 2000, dealt with Jerusalem as a separate issue from the West Bank. The issue of Jerusalem in a final peace deal was to be negotiated separately.

But now, according to the United Nations—notably enabled and supported by America’s abstention—the Israelis not only cannot build or live in Judea and Samaria, but any construction in East Jerusalem beyond the now-invisible 1967 lines is also illegal.

The UN has unilaterally divided Jerusalem, and Israel didn’t even have a vote—or an ally willing to vote on its behalf.

Some past Israeli leaders have offered East Jerusalem to the Palestinians in an effort to reach a peace agreement. One of these was former Prime Minister Ehud Barak.

In 1993, the government of Yitzhak Rabin signed the first set of the Oslo Accords. It became the new foundation from which Israeli-Palestinian peace would be negotiated. As part of the accords, the future of Jerusalem was declared to be a separate subject for future negotiations. The likelihood of Israel giving up sovereignty of East Jerusalem in a peace deal was highly unlikely. Rabin even declared in his last Knesset speech before he was assassinated in 1995 that Jerusalem must always remain the united capital of Israel.

Five years later, however, one of Rabin’s own followers, Ehud Barak, went against Rabin’s stance.

In 2000, during the waning months of his time in office, Barak offered Palestinian Liberation Organization chairman Yasser Arafat, a terrorist, the West Bank and East Jerusalem in return for peace as part of the Camp David summit negotiations with U.S. President Bill Clinton.

This offer signaled a radical shift in the Jews’ negotiating platform: Israel was now willing to negotiate away East Jerusalem. Israel had always said Jerusalem would be undivided, but apparently the Israelis themselves were divided over that issue.

Dore Gold, adviser to Prime Minister Benjamin Netanyahu, recounted in his book The Fight for Jerusalem that when the Israeli people learned that Jerusalem was being offered as part of a peace deal, they were furious. This led to the largest demonstration in Israel’s history: A protest march to the Old City walls drew an incredible 400,000 Israelis.

Yasser Arafat refused the offer. Still, at the time, some leftist Israeli officials considered proposing a unsc resolution where the parameters for peace including East Jerusalem would be locked into Israel’s new negotiating position.

That didn’t happen in 2001. But fast-forward to December 2016, and that Security Council resolution has passed. The international community has unilaterally decided, with U.S. support, that East Jerusalem does not belong to the Jews. East Jerusalem is no longer up for negotiation: the UN has decided that it is Palestinian land and the Jews have no right to it. Jerusalem, according to the United Nations, is not the united capital of the Jews.

Why is this important? It would be easy to disregard Resolution 2334; it’s nothing more than talk. Israel today, especially under the leadership of Prime Minister Benjamin Netanyahu, would refuse to concede the Old City and East Jerusalem to the Palestinians; the prime minister himself has said as much. If the UN decides to enforce this resolution, it would have to march member-nation armies into Jerusalem to force Israel out. Most people agree that it would be highly unlikely and irregular for the UN to be able to organize itself that way.

But it is possible that the Palestinians themselves could react to this resolution in an armed uprising and/or terrorist intifada and try to take what the UN has now said already belongs to them. At that point, Israel would suppress the violence. One would think that, on the basis of the resolution, the international community would then retaliate against Israel.

For the past two decades, the Trumpet has forecast this exact scenario we see developing. Pointing to a prophecy in the biblical book of Zechariah, Trumpet editor in chief Gerald Flurry has said for many years that half of Jerusalem will indeed fall into Palestinian hands.

In March 2006, he elaborated on how it would come about: “It seems the Palestinians could get East Jerusalem, minus the Temple Mount, without a fight. Zechariah’s prophecy implies that there will be an impasse over the Temple Mount—which the Palestinians ‘resolve’ by taking East Jerusalem by force. That is why I believe the conservatives could regain control in Israel. They have a stronger will to fight for the land they believe belongs to the Jews.”

At the time Mr. Flurry made this statement, a passive left-wing government was in power. But for this prophecy to unfold, it appeared conservatives would have to return to power.

This has since happened.

Netanyahu will not accept Palestinian control of the Temple Mount or East Jerusalem. Yet buoyed by this recent resolution and likely further action by the international community in the coming months, the Palestinians could be motivated to make a run for it themselves.

In this environment, the unsc resolution does not improve the chances for peace between the Israelis and the Palestinians. It instead undermines Israel’s negotiating position and encourages the Palestinians to fight for the land, thus bringing into play Zechariah’s pivotal prophecy of half of Jerusalem falling.

Added to this, Prime Minister Netanyahu seems to be viewing the presidency of Donald Trump in the United States as a green light to virtually disregard the United Nation Security Counsel’s decision. This was evident in the first week of Mr. Trump’s tenure when the Israeli government approved construction for nearly 600 apartments in east Jerusalem as well as almost 2,500 abodes in outlying areas of the West Bank in direct defiance of the resolution. After the decision to proceed with the construction in East Jerusalem Mr. Netanyahu stated, “There is no longer a need to coordinate construction in the Jewish neighborhoods in East Jerusalem. We can build where we want and as much as we want.” However, it is likely that these actions will only further infuriate the Palestinians and the rest of the world. This will only increase the volatility of the situation.

In 2017, all eyes are going to be on Jerusalem. Zechariah’s prophecy of half of the city falling is a verifiable and highly visible event that sets off a chain reaction of the fulfillment of subsequent prophecies leading to the coming of the Messiah.

To understand in detail the events to follow the fall of East Jerusalem, read Gerald Flurry’s booklet Jerusalem in Prophecy.