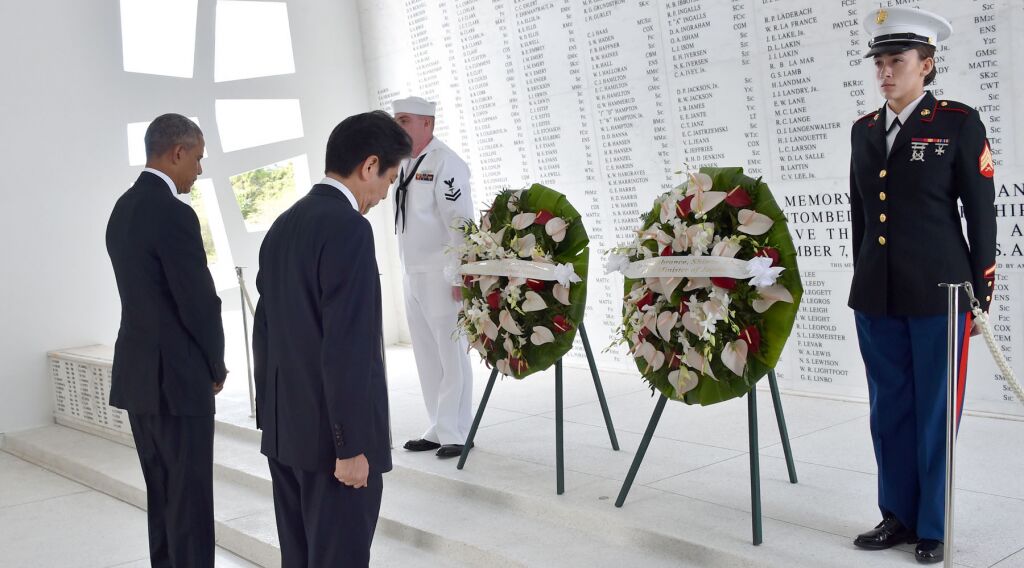 Japanese Prime Minister Shinzo Abe made a historic visit to Pearl Harbor on December 27, where he expressed his “sincere and everlasting condolences” for the 2,403 Americans and the 64 Japanese killed during the Dec. 7, 1941, Japanese attack.

“We must never repeat the horrors of war again,” Abe said, “this is the solemn vow the people of Japan have taken.”

Prime Minister Abe was accompanied by United States President Barack Obama, in what will likely be Mr. Obama’s final visit with a foreign leader as president. Mr. Abe praised the U.S. for its postwar work to rehabilitate Japan, calling the resultant relationship between the two nations an “alliance of hope.”

Abe’s visit follows President Obama’s historic trip in May to Hiroshima, where the U.S. dropped an atomic bomb in 1945 in hopes of bringing an end to Japan’s military fanaticism.

While Abe’s visit to Pearl Harbor is being widely celebrated as a victory for diplomacy and for the U.S.-Japan alliance, it is noteworthy that Mr. Abe’s statement was not an actual apology. Instead of saying, “I’m sorry that our government killed these people,” he basically said, “I’m sorry that these people—both the Americans and the Japanese—died.” His failure to ascribe the blame to Japan hollowed his statements.

Abe’s carefully chosen words allow him to demonstrate to the increasingly belligerent China that the U.S.-Japan alliance remains robust, while also allowing him to avoid upsetting hawkish factions of Japanese society who believe Japan has nothing to apologize for.

Among such factions is Hiromichi Moteki, the acting chairman for Japan’s Society for the Dissemination of Historical Fact. Moteki said he was “relieved” that Abe did not apologize. “Why should Abe apologize? For the prime minister to apologize would be a distortion of history, because Japan’s view of history is still strongly influenced by the outcome of the Tokyo War Trials, that Japan was the aggressor and in the wrong.”

Moteki is among the conservative Japanese who insist that the Japanese attack on Pearl Harbor was not a “sneak attack,” nor was it the beginning of the war between the U.S. and Japan, since it was preceded by America imposing economic sanctions on Imperial Japan. He also insists that China instigated the Sino-Japanese War, and denies both the Nanjing Massacre and the Japanese Imperial Army’s use of “comfort women” during the war.

Moteki and many other Japanese conservatives deny any Japanese wrongdoing in the lead up to and during World War ii. Abe’s reluctance to confront such dangerous historical revisionists exposes the worrying underpinnings of his leadership.

To understand more about the dangers of this leadership, read “Why the Trumpet Monitors Japan’s March Away From Pacifism Toward Militarism.”