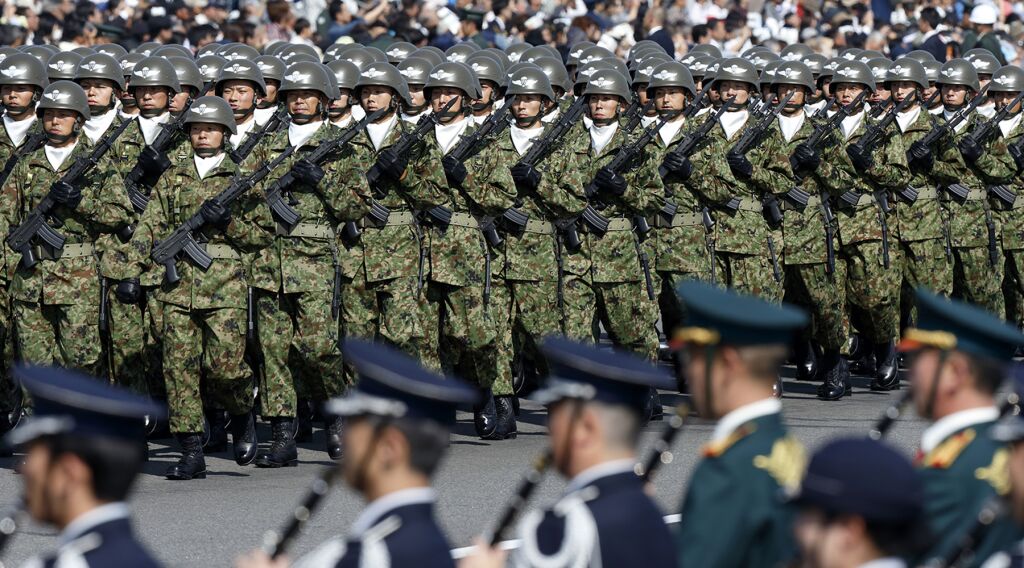 The Land of the Rising Sun is rising again.

Seventy-five years after the bombing of Pearl Harbor, Japan—a nation that was to “forever renounce war as a sovereign right”—now boasts a military that “might be even stronger” than it was in World War ii. And it is set to grow bigger still.

Japan’s defense budget for 2017 is expected to hit a record high of $44.6 billion. This will mark the fifth year in a row that Japan’s defense spending has increased. The budget includes plans to develop land-to-sea missiles; upgrade Japanese missile destroyers with American-developed, Aegis-advanced radar systems; and construct a new type of submarine. The increase is part of a five-year plan by the Japanese government to increase military spending by 0.8 percent each year until 2018.

Japan is currently in the top-10 list of the most powerful militaries in the world. While its pacifist Constitution—imposed after the Second World War—forbids Japan to wage war offensively, it has been free to build up a self-defense force. Japan has been able to establish one of the most sophisticated militaries in the world, thanks to America bearing the primary burden of defending the nation. John T. Kuehn, a professor of military history at the U.S. Army Command and General Staff College, told cnn, “Pilot for pilot, ship for ship, Japan can stand toe to toe with anybody.”

As time goes on, the stigma of waging war is quickly fading from Japan’s memory. Numerous attempts in the past few years have sought to reinterpret Japan’s pacifist Constitution. Its leaders seem eager to use Japanese forces abroad. In late November, the nation took an unprecedented step in expanding the use of the Japan Self-Defense Force: It assigned 350 soldiers to South Sudan as part of a United Nations peacekeeping taskforce with permission to use force. This is the first time since World War ii that Japanese soldiers are being allowed to fight on foreign soil.

All this comes at a time when Japan feels increasingly threatened by a nuclear-armed North Korea and a belligerent China. To help counter that threat, Japan signed an intelligence-sharing deal with South Korea on November 23. This pact allows the two nations to share key information about threats from North Korea without United States involvement. For years, the U.S. has encouraged these two nations to make this deal to help stymie North Korean aggression.

The deal is an unprecedented move, considering the history of the two nations. Many in South Korea dislike Japan because of the history between the two. Japan ruled over South Korea from the early part of the 20th century to the end of World War ii. During that time, it committed numerous atrocities against the South Korean people.

The Japan-South Korea deal was first scheduled to be made in 2012, but it was postponed because South Koreans were opposed to working with Japan. Four years later, it appears times have changed. While it still faced opposition in South Korea, the deal was able to pass.

Although the U.S. praised the deal, China condemned it. Chinese Defense Ministry spokesman Yang Yujun expressed “serious concern” about the deal: “We will make all necessary preparations, earnestly perform our duties and fulfill our mission, resolutely protect the country’s security interests, and resolutely protect regional peace and stability.”

To China, which is currently locked in territorial disputes with Japan, the agreement has the makings of a military alliance that could counter its regional goals. Both Japan and South Korea are allied with the United States, and China views the deal as a step toward a new, unified power bloc that would prevent it from taking an even more aggressive posture.

However, this deal, together with the increased military spending, could be signs of a splintering relationship between Japan and the United States. President-elect Donald Trump singled out Japan as a nation that needed to pay more for America’s defense aid or prepare to lose America’s military backing. A burying of the hatchet between Japan and South Korea could be an indication that Japan is looking to form its own alliances because it feels that it cannot rely on the United States as it has been in the past.

Aside from Mr. Trump’s rhetoric, there are other signs that America is planning to downsize its presence in Japan. U.S. Defense Secretary Ash Carter announced on December 6 that the U.S. planned to return some of the land used by its military base in Okinawa to the Japanese government by the end of the year. It will be the largest land return by the U.S. to Japan since 1972.

The Trumpet has long forecast that Japan would rise from its ignominious defeat in World War ii to become part of a military power bloc now forming in Asia. This increase in military spending is leading to an arms race, and arms races often lead to war. Be sure to watch for Japan to continue on its path of increased military spending.

As we wrote in Russia and China in Prophecy, “Unable to fix its own deflationary economic spiral, might Japan try to revive its economy by taking a more independent approach to security in East Asia? Any separation from the U.S. would require Japan to crank up its defense spending. This could be just what Japan needs to mend its economic sickness.”

As Japan rises, so does its militarism. Today, Japan is seen as America’s ally; 75 years ago, it was a mortal enemy. That may seem like a long time, but can America be sure that Japan has exorcised its militaristic demons? To understand where this trend of militarization is leading Japan, be sure to read “Why We Watch Japan’s March Toward Militarism.”