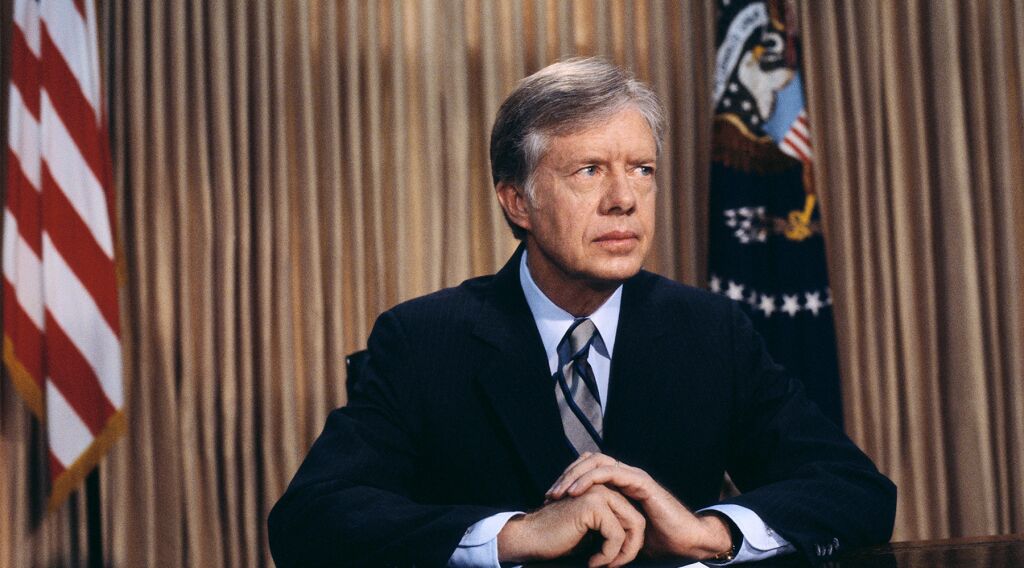 President Obama wasn’t the first to offer Iran money in exchange for hostages.

On the morning of Jan. 16, 1981, United States President Jimmy Carter sat down with his advisers to discuss one last proposition to get 52 American hostages out of Iran. Carter had four days left in office after he lost his reelection bid, which was largely blamed on how he handled the Iran hostage crisis.

The subject of Carter’s January 16 meeting was an Iranian proposition made the day before. Carter recorded the details in his White House diary:

The Iranians made a good proposition to us yesterday based on transferring $8.1 billion to the Bank of England. They would then refund all except about $3 billion of it, release the hostages immediately, and solve the rest of the disputes over interest rates and claims through normal processes in the future.

That day, Carter got the ball rolling on an exchange when he made the decision to unfreeze Iranian gold and bank assets and transfer them into an escrow account at the Bank of England.

Although he was afraid the money wouldn’t be transferred until after the weekend (since January 16 was a Friday), Carter asked the intermediary, Algeria, to get Iran to prepare the hostages for an exchange.

The weekend seemed quiet, but banking wires were active as banks from the United States, Algeria, England and Iran started preparing to move unfrozen cash.

The following days played out like a Hollywood script.

By Monday, things really got moving. Early in the morning, the White House received word that two planes had left Turkey for Tehran and that Iran had signed off on the wire transfers. Everything was falling into place.

Then came a snag. Carter wrote that at about 5:30 a.m. his staff learned that Iran’s central bank still had not provided the technical instructions needed to make the transfer. “[W]e got negative reports that the Bank Markazi did not agree with the terms of the papers they had already signed and were using this refusal to hold up the entire process,” Carter recorded in his diary.

By 2:00 a.m. Tuesday, Bank Markazi finally followed through. Carter did not specify what the holdup was. Likely, Iran was upset about some of the technical conditions of the agreement; negotiators probably found a work-around and pressed ahead with the exchange.

Tuesday was inauguration day. Carter was down to his final hours as president. He recorded those early-morning details down on a notepad to the minute and later wrote them into his White House Diary.

It was a hectic morning with a complicated exchange scheme—but Carter’s staff managed to force it through.

At 2:23 a.m., the transfer numbers began coming through. At 3:40 a.m., Carter received word that U.S. lawyers in Algeria refused to sign the money through; they wanted to make some adjustments. A holdup like that would be costly because Algeria refused to make any agreements without approval from Iran.

Carter’s staff got the lawyers to sign off; they could worry about amendments later. At 5:20 a.m., the transfer was made to London. At 6:05 a.m., the flight carrying 52 U.S. hostages who had been held in Iran for 444 days was lined up on the tarmac in Tehran ready to depart. Shortly after, the Bank of England confirmed it received the roughly $8 billion in unfrozen Iranian money. At 8:28 a.m., the plane was at the end of the runway.

Carter put on a suit and prepared to go to Ronald Reagan’s inauguration, which, on this day, was little more than a side stop for him. Carter was excited—he’d done it, the hostages were coming home.

As far as legacy building is concerned, however, the outgoing Carter was in an awkward position. His loss in the election was blamed on how he handled the Iran hostage crisis. For one year, he’d tried to negotiate with Iran, but it wouldn’t budge.

Ronald Reagan’s electoral victory was the turning point. Iran finally started to come around to making an exchange. The Iranians could sense strength in Reagan, and they hurriedly rushed to make an exchange before his inauguration.

There’s still speculation about what Reagan would have done had he inherited the Iran hostage crisis. Some say military action; others thought he would call off negotiations altogether. Either way, Iran knew that it would get a better deal from Carter.

In the end, the hostages were released and Iran received about $8 billion in unfrozen cash and gold. Carter received credit for bringing the hostages home, but Reagan’s victory was the catalyst.

The day the 52 U.S. embassy workers were taken captive in Tehran, Nov. 4, 1979, Carter wrote in his diary, “Without the protection provided by the host government, it’s almost impossible to do anything if one’s people are taken.”

The spirit behind that statement sums up why it took so long before the hostages were returned. From the outset, Carter took the approach that there was little America could do to solve the crisis if Iran was unwilling to work with it—there was no projection of strength.

On his visit with the American hostages in Germany just after their release, Carter wrote:

I told them that we had never considered apologizing or paying any ransom, that we had seized between $11 and $12 billion in Iranian money, and that yesterday, after their release, we refunded less than $3 billion of it to Iran. The hostages broke into enthusiastic applause.I told them I had been worried that they might be angry because we cheated Iran.

Carter’s deal seems similar to the recent hostage deal President Barack Obama tried to shield under the implementation of the nuclear agreement with Iran on January 16 of this year. Both administrations were adamant they would not pay ransom, even though the release of the hostages in both instances was conditional upon Iran receiving money. Both of these deals also occurred around January 16.

The way President Obama has dealt with Iran, however, is much worse.

At the very least, Carter recognized that the leaders of Iran were America’s enemy. In one section of his diary, he calls Ayatollah Ali Khomeini an “idiot.” He wrote that the criminals holding the Americans hostage were “all liars” and admitted there was “no way to tell what the facts might be.”

I instructed my people to prepare for a breakdown in negotiations and possible hostage trials. I’ll declare a state of belligerency or ask Congress to declare war against Iran. We’ll freeze the Iranians’ assets permanently, go directly to the UN Security Council, and call for complete sanctions against Iran.

None of those things came to fruition, but at least Carter considered it an option.

Jimmy Carter’s approach to Iran, despite his best intentions, didn’t work. Carter said he didn’t pay ransom for the 52 captives—even though Iran wouldn’t release them without the assurance of $3 billion. He set a precedent: If Iran wants it’s unfrozen money, it simply has to take Americans captive and the money comes in.

Why is it important to look back at this history? Because 35 years later, Iran hasn’t changed.

The same, belligerent, ayatollah-led Iran is still around today. And the way it responds to weakness is still the same.

The Iranians have become more emboldened than ever—they’re calling the shots, literally. When you give in to the enemy, he always comes back for more.

Iran continues to test-fire ballistic missiles, despite a UN resolution that prohibits such activity. Iran took 10 U.S. sailors captive after they drifted into Iranian waters. Iranians filmed the sailors with their hands behind their heads; one woman was forced to wear a headscarf; another soldier was forced to give a recorded apology.

After embarrassing the American captives, Iran released them the next day to the showering praises of figures like Secretary of State John Kerry and Vice President Joe Biden. Biden said it was just “standard nautical practice.”

Despite that episode, the administration still went ahead with the January 16 nuclear deal, and also tacked on a prisoner swap.

Iran is the largest state-sponsor of terrorism in the world. Its influence, with the added allowance now of billions of dollars in unfrozen cash, has expanded to Yemen, Syria and Iraq.

It is clear that Iran is not interested in having peace with the nation it calls “the great Satan.”

Jimmy Carter was in a lame-duck period when he pushed the 1981 Iran deal through. Iran knew it wouldn’t be able to negotiate a deal with Reagan. Mr. Obama’s time as president is almost over. He’s already made his deal with Iran and cleared the way for it to cause a lot of trouble throughout the Middle East. Is another Ronald Reagan-type figure going to come on the scene to clean up this mess?

It doesn’t appear so. Iran was hardly a talking point throughout this year’s presidential campaign. But that doesn’t mean the threat is gone. Contrary to the Ben Rhodes-orchestrated story that Iran has become a moderate state, Iran is just as much a threat as ever. Sadly, most Americans don’t care.

In this year’s October issue of the Trumpet magazine, editor in chief Gerald Flurry wrote, “America’s weakness is exposed, and Iran will continue to capitalize on that. Where is the pride in our power? There is no fighting spirit in the American people. America has proved itself willing to be pushed around. It is faint of heart.”

America has the strength to stand up to Iran, but it has lost its pride in its power and is failing to project that strength on the world stage. America’s enemies see a reclusive superpower, and they will be sure to cash in.

This is a sad era for America. Why is the United States so weak in the face of a clear enemy?

“The wicked flee when no man pursueth: but the righteous are bold as a lion” (Proverbs 28:1). America clearly has the power to be bold in the face of its enemies, yet it continues to cower away. It has become weak because it is no longer righteous.

Ronald Reagan certainly wasn’t a perfect leader, but he knew that America was strong when it had a close relationship with God. In his 1984 State of the Union address, Reagan said, “America was founded by people who believed that God was their rock of safety. He is ours. I recognize we must be cautious in claiming that God is on our side, but I think it’s all right to keep asking if we’re on His side.”

Imagine what blessings America would have if it asked that question, Are we on God’s side?, and then evaluated itself against the Bible to see whether it is or not.

America shows no signs of repentance today, but the Bible says a time is coming when America will be strong and prosperous once again. But this next time, it will obey God’s laws and its strength and prosperity will last.

If you haven’t yet read Gerald Flurry’s latest booklet, Great Again, request your free copy or read it online.