‘Every city or house divided against itself shall not stand.’ 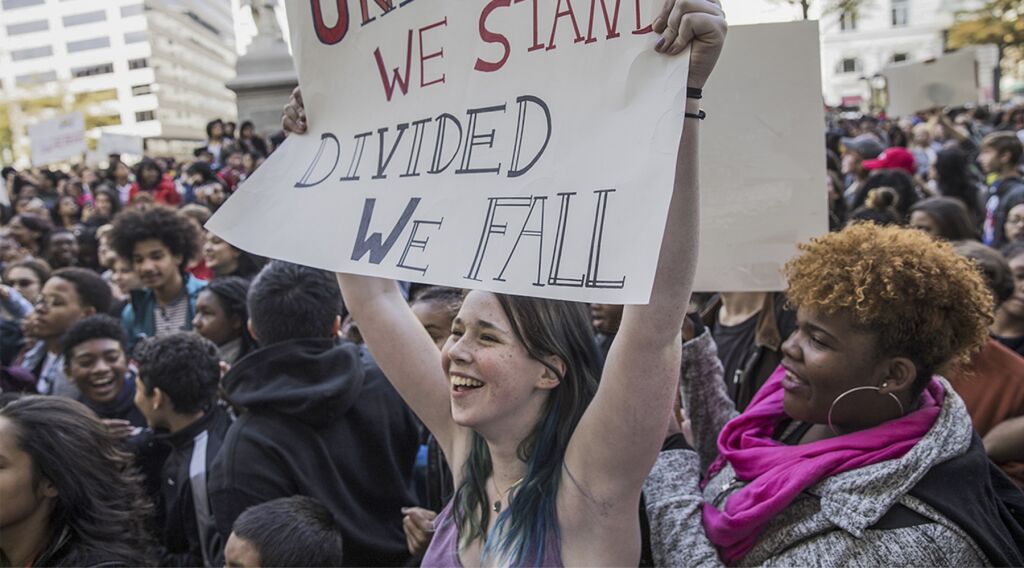 ‘Every city or house divided against itself shall not stand.’

The day after Donald Trump was elected America’s 45th president, tens of thousands of demonstrators took to the streets in protest. In the weeks that followed, they burned an American flag in Salt Lake City, torched a papier-mâché effigy of the president-elect in Los Angeles, threw rocks at police in Indianapolis and blocked traffic in Miami.

These protests and riots highlight America’s sobering ideologically divide. Even though Mr. Trump gained enough state victories to claim a win in the U.S. electoral college, a Washington Post-abc poll conducted just after the election showed that one in three Hillary Clinton supporters view his victory as illegitimate since he lost the popular vote.

Vermont Senator Bernie Sanders and former U.S. Attorney General Eric Holder have both suggested that in order for America to unite, the electoral college must be abolished. Yet the electoral college was designed to prevent a few densely populated counties from ruling the rest of America. Abolishing the electoral college would tip the balance of power back toward Democratic Party-controlled urban population centers, but would do nothing to heal the dangerous ideological divide that afflicts the nation.

This ideological divide is now wider than at any point in U.S. history since the post-Civil War Reconstruction Era ended in 1877.

James Lo, an assistant professor of political science at the University of Southern California, says the ideological divide between Republican and Democratic lawmakers in Congress began to narrow after the end of the Reconstruction Era. By the 1960s, there was significant bipartisan consensus between the two parties. Republicans and Democrats worked together to lower taxes, fight communism and expand civil rights.

Beginning in the 1970s, however, the divide began to widen once again as the New Left faction of the Democratic Party sought to fundamentally change America through cultural reforms on issues like income redistribution, abortion rights, homosexual rights, gender roles and drug legalization.

Today, there is almost zero overlap between Republican and Democrat political positions in Congress. The recent United States presidential election highlights this fact perhaps more than any event in the past century. Republicans are convinced that a Hillary Clinton victory would have meant the end of America’s constitutional republic, while Democrats denounce Donald Trump as a racist, misogynist, xenophobic demagogue on par with Adolf Hitler.

How far back in America’s history do you have to go to find a time when we were this divided? The Civil War. In the mid-1800s, Americans were so at odds with each other that they resorted to warfare, costing more American lives than all other American wars combined.

This urban-rural ideological divide is more dangerous than the north-south divide that resulted in the War Between the States. America’s metropolitan areas cannot secede from the union like a state can. This means that unless something is done to heal the deep ideological differences in America, the protests and riots currently engulfing America’s cities will only escalate. It appears more and more likely that this unrest will escalate into full-scale revolution and urban war!

President Abraham Lincoln famously quoted Jesus Christ when he said, “A house divided against itself cannot stand.” History shows that when a nation falls into division and infighting, it quickly becomes consumed by internal crises that leave it vulnerable to attack by foreign enemies. This is exactly what God prophesies will happen to America in the near future. Why? Because Americans have rebelled against His law. In Ezekiel 5, God reveals that there will be a time of violent rioting in the cities of America (as well as Britain) just before they suffer a foreign invasion. The dangerous level of ideological division in modern-day America is leading to the ultimate fulfillment of this prophecy.

The grand lesson of all history is that the law of God is the only law that leads people to peace, unity and prosperity. As people seek unity with God, they also achieve unity with each other. As political division and civil unrest grips America, as hostile foreign powers rise, it’s time to look to the same Bible Abraham Lincoln did and seek the Eternal while He may be found, and call upon Him while He is near (Isaiah 55:6).