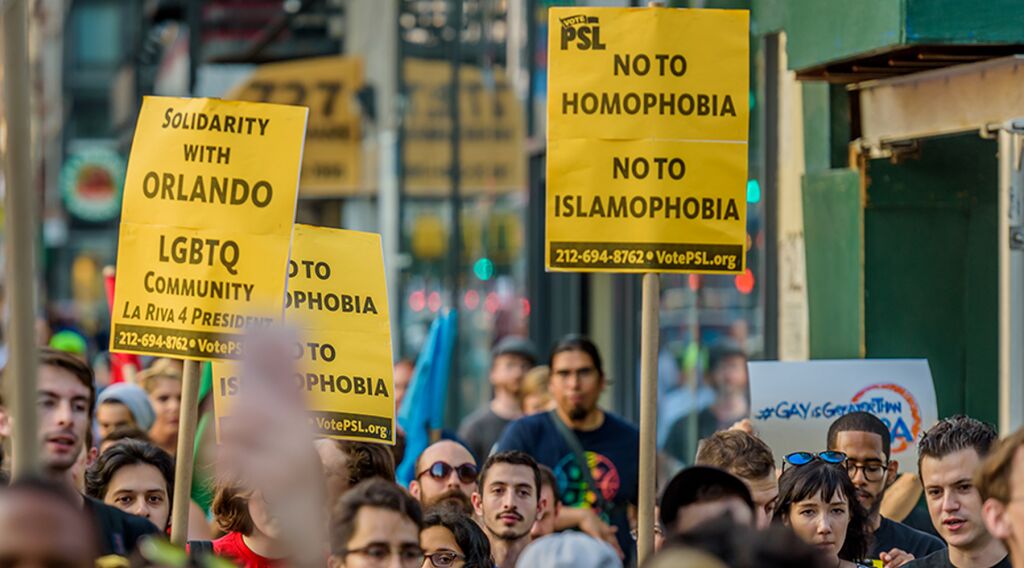 Contradictions in the alliance between radical leftists and Islamic fundamentalists only make sense when you realize both ideologies have the same short-term goal.

When the average leftist sees homosexuals in the news, he doesn’t view them as individuals living an immoral lifestyle; he views them as an oppressed special interest group needing protection from intolerant Christians.

When he sees Islamists in the news, he views them in much the same way. They’re not individuals under the influence of a toxic ideology, but an oppressed minority fighting against Judeo-Christian imperialism.

The fact that 10 out of 51 Muslim-majority countries in the world punish homosexuality with death doesn’t affect his belief that homosexuals and Islamists need to unite against traditionalist Christianity.

When this leftist reads how Omar Mateen pledged his alliance to the Islamic State before gunning down 49 people in a homosexual nightclub, he agrees with the New York Times assessment that Mateen’s Islamist ideology had no bearing on the situation. Instead, he places the blame on America’s Judeo-Christian ideas about sexual morality. As the Times’s editorial board argued: “Hate crimes don’t happen in a vacuum. They occur where bigotry is allowed to fester, where minorities are vilified, and where people are scapegoated for political gain. Tragically, this is the state of American politics, driven too often by Republican politicians who see prejudice as something to exploit, not extinguish.”

Some notable leftists, such as Bill Maher and Richard Dawkins, do point out that the political left has some major hypocrisy issues in regard to Islam. If “sexism” is among your political ideology’s cardinal sins, which should you oppose more: men who lead their families according to biblical gender roles, or men who force women into burkas? Most left-wing politicians, however, bend over backward to defend political Islam while labeling Christians as sexist homophobes.

Despite the fact that 87 percent of women in the Islamic Republic of Afghanistan have been domestically abused, left-wing sources like the Huffington Post argue that “Islam has a culture and history of women empowerment,” while patriarchy and gender bias are “rampant in Christian culture.” Despite the fact that 800,000 black Africans currently live in chattel slavery to Arab masters in the Islamic Republic of Mauritania, sources like AlterNet claim the “future of life on the planet” is really being jeopardized by the “white supremacist ideology” of Christian politicians, like Sen. Ted Cruz (who is Hispanic) and Dr. Ben Carson (who is black).

Such contradictions in the rainbow alliance between radical leftists and Islamic fundamentalists only make sense when you realize both ideologies have the same short-term goal: end Judeo-Christian culture.

“At first, an alliance between Muslims and atheists might sound a little strange, but the concept is real and one that should be encouraged and sought out,” wrote Mandie Czech for the Chicago Monitor. “Both groups are misunderstood, perceived as enemies, and are often persecuted verbally or politically for their beliefs. … For Muslims, the Koran is very specific that ‘there is no compulsion in religion.’ But it is interesting that many conservative Republicans feel the need to bring Christianity into their work and into law they support and enact.”

Such statements are ironic in that every country in the world today that punishes atheism with death is an Islamic theocracy.

Not only do I think it’s possible but I think it is vitally necessary and I think it is happening already. It is possible because the progressive movement around the world and the Muslims have the same enemies. Their enemies are the Zionist occupation, American occupation, British occupation of poor countries, mainly Muslim countries. They have the same interest in opposing savage capitalist globalization, which is intent upon homogenizing the entire world ….

Galloway revealed the leftist’s worldview that political Islam and international socialism are not threats; the threat is Anglo-American domination.

Moderate leftists may express this sentiment in less inflammatory terms, but the idea that a countercultural alliance is necessary to “fundamentally transform” the culture underpinning Western civilization is widespread.

The last time a Muslim-progressive alliance “fundamentally transformed” a government was during the 1979 Iranian Revolution. Many left-wing political organizations, such as the Mojahedin-e-Khalq, supported Ayatollah Ruhollah Khomeini’s revolution against Shah Mohammed Reza Pahlavi. Once the common enemy was eliminated, however, Khomeini condemned his former allies as unbelievers. It has been estimated that between 15,000 and 30,000 socialists, Communists and other secularists were killed in Khomeini’s betrayal of the Iranian left.

As underreported as this fact is, it’s obvious radical Islamists would do such a thing to secularists—once the greater enemy is gone.

It has become common to hear pundits from the left speak of the U.S. Constitution as an impractical, antiquated document unworthy of the 21st century. A large number of Islamists would agree with this sentiment. Nearly 20 percent of U.S. Muslim respondents in a survey done by the Center for Security Policy said the use of violence was justified to make sharia the law of the land. Roughly 23 percent of British Muslim respondents in a survey done by the Gatestone Institute said sharia should replace British common law in areas with large Muslim populations.

The Islamist version of Anglo-America’s future undoubtedly looks different from the radical left version. In the short term, however, both ideologies want to destroy the current system. As the ancient proverbs says, “The enemy of my enemy is my friend”—for now.