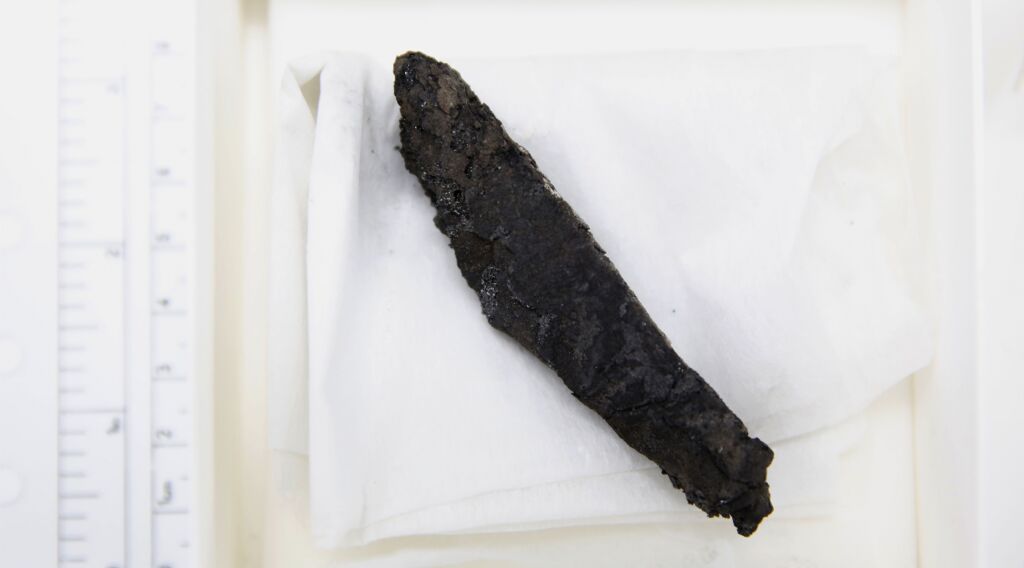 Around the end of the sixth century, in a town on the edge of the Dead Sea, a fire ravaged the scrolls of a synagogue’s holy ark. One of the burned scrolls sat for nearly 1,400 years before an archaeologist discovered it in 1970. But it could not be read; if it were opened, it would disintegrate. But with new digital analysis of X-ray scans, scientists have been able to “virtually unwrap” the scroll and read its contents.

It contained portions of chapters 1 and 2 of the biblical book of Leviticus. Michael Segal, professor of biblical studies at Hebrew University who worked on the project, described what was written on the scroll:

The text of the two chapters of Leviticus that have been uncovered so far is letter-to-letter identical to the Masoretic text that we know from medieval manuscripts. Similarly, in these two chapters, the section/paragraph divisions are in identical locations to the medieval [Masoretic Text].

Radiocarbon results dated the scroll to around a.d. 300, but Dr. Ada Yardeni, after analyzing the handwriting of the text, dated it earlier, to around the first century a.d.

The importance of the discovery lies in the fact that the scroll is identical to the Masoretic Text. Dead Sea Scroll scholar Emanuel Tov, who participated in the project, said, “This is quite amazing for us. In 2,000 years, this text has not changed.”

The Masoretic Text is a Hebrew and Aramaic text of the Christian Old Testament, but the oldest copies only date back to the ninth century a.d. When King James’s scholars translated the Authorized Version of the Bible in 1611, they had to choose between a number of different ancient texts. A Greek translation of the Old Testament, the Septuagint, was much older, dating back to the third century b.c.

The Masoretic Text and the Septuagint differ in a number of places. Most of the differences are merely grammatical, but some involve additional verses. King James’s scholars chose the Masoretic Text, which they believed had been carried from the original language since it was canonized.

Segal wrote that the identical text in the scroll “tells us that the medieval [Masoretic Text] is based upon a very careful transmission of an earlier text.” In deciphering the burned scroll, scientists have pushed back the date of the earliest Masoretic Text by around 800 years.

Deciphering the scroll from start to finish took the team just over a year, but in the future, with the technology already developed, they say it could take as little as a few months. Brent Seales, chairman in the department of computer science at the University of Kentucky, said the team is working toward using the technology on similarly ancient untouchable scrolls.

When those scrolls are deciphered, Christians and Jews can look forward to adding to the pile of mounting evidence proving that the Bible was accurately transmitted through history.