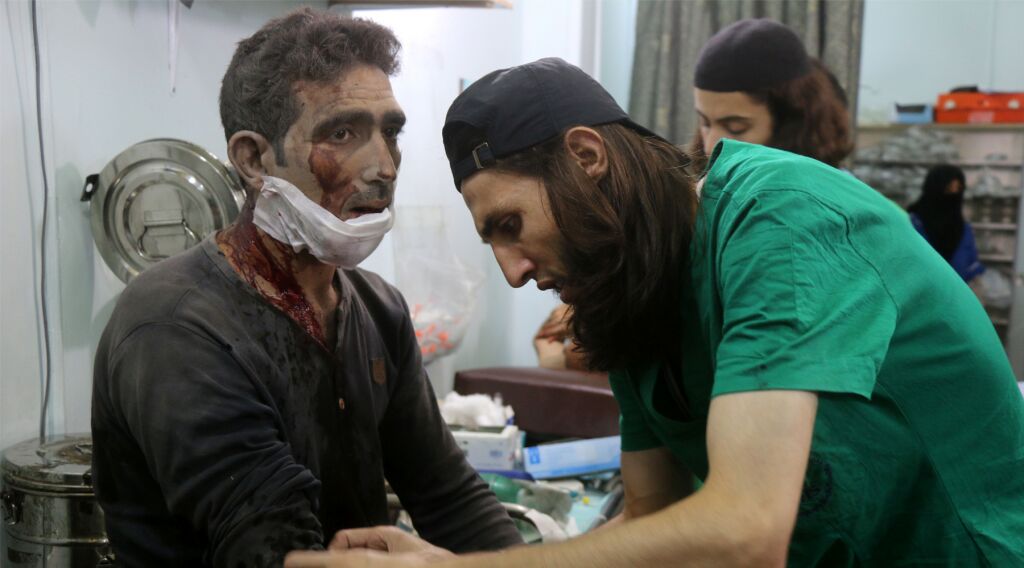 A historic moment—Russian bombers use Iran for the Syria campaign.

On August 16, Syria’s rebel-held city of Aleppo and the Idlib and Deir al-Zour provinces were hit hard. Unlike air strikes of the past, the payloads dropped from the Russian Tupolev-22M3 long-range bombers were particularly potent. The New York Times quoted a radiologist in Aleppo who said the bombings on that day were “intensive and massive.”

Flanked by Su-34 tactical bombers, the long-range Tu-22M3s dropped larger-than-usual payloads on targets that, according to the Russian Ministry of Defense, included five ammunition dumps, three command posts, training camps and militants from both the Islamic State and Jabat al-Nusra.

The bombings signified a historic turning point in the Middle East, not for their ferocity, but because of where the planes came from. Ordinarily the long-range bombers take off and land in Russia—being too large for Syrian air fields. But on August 16, the bombers flew from Iran.

A Turning Point for Iran

For the first time since the 1979 Iranian Revolution, Iran allowed a foreign power to operate from one of its air bases. The bombers are now stationed at Hamadan air field in the northwest of the country.

Not even in the days of Shah Mohammed Reza Pahlavi did the United States have the ability to conduct sorties out of Iran. The shah rebuffed most U.S. efforts to be more involved. Following his overthrow, American influence plummeted even further.

Yet 37 years after the revolution, Russia is making headlines as the first nation to be granted such access.

No doubt the allowance comes at a cost. While details are hazy, many analysts believe that Iran would require some financial kickbacks from Russia, even though the bombers are serving Iran’s interests in Syria.

Aside from providing finances, the deal sends a message: It reaffirms Iran’s commitment to keeping the Syrian regime afloat. Iran is willing to do away with deep-seated ideals on national freedoms and security in exchange for a unified front against its enemies in the region.

In particular, the move strikes at the Saudi-led Sunni nations that currently oppose Syrian President Bashar Assad. By accommodating Russian bombers, Iran deepens the Sunni-Shiite divide, and exposes who Russia is really fighting for.

By working with Russia, Iran proves the two nations are walking in tandem—at least in Syria.

Iran’s goal has always been the preservation of the Assad regime. Russia, however, has thinly veiled its ambitions by saying it is targeting the Islamic State (never mind that this serves Assad’s purposes). But working alongside Iran on a historically intimate level shows that the three nations are in cahoots.

The united front is a formidable demonstration of power and influence. By contrast, U.S. reluctance to get involved and the squabbling among rebel groups show the disunity of those opposed to Assad’s reign.

Time called the bombing run the crossing of a “threshold.” It also said that the U.S. now faces a new “axis of evil in the Middle East: Syria, Iran and Russia.”

Russian-Iranian actions were more political than militaristic. True, Russian bombers can now fly more often and carry larger payloads—the trip has been cut from 1,200 miles to 400. But more importantly, the deal clearly emphasizes the reach and influence of Russian President Vladimir Putin.

Skies that were once filled with U.S. weaponry are now open to Russian jets crisscrossing from Iran to Syria. The sway of battle in Syria is no longer the prerogative of America, but Russia. Iran, the nation that U.S. President Barack Obama has sought to cozy up to over the course of his presidency, now breaks from multi-decade-long norms to accommodate the wishes of Russia, not America!

For Putin, the ability to operate out of Iran is a major political victory. As the Kremlin attempts to establish itself as a viable alternative to America, this deal speaks volumes.

The partnership builds on preexisting foundations of a military alliance. Russia has sold and delivered the infamous S-300 air defense missile system to Iran. Last year, the two nations signed a military cooperation deal that focused on training and waging war on terrorists. According to various reports, Russia requested and received permission to use Iranian airspace for cruise missiles fired from the Caspian Sea and targeting rebels in Syria. Putin’s top Middle East envoy recently visited Iran for discussion on Syrian and other Middle Eastern issues.

Moscow and Tehran have steadily worked toward full military cooperation. Their soldiers have fought and trained in the same theaters of war, but now the cooperation is reaching historic levels. They have crossed the threshold, presenting an increasingly unified front to their opponents.

Where the U.S. has withdrawn from Middle East conflicts, Russia has been more than willing to step in. In Syria, Russia has committed tanks, artillery and combat aircraft, not to mention a new air base in Latakia. With a broader goal of replacing America as the regional power, Russia doesn’t want to see a U.S. reappearance in the Middle East. Military partnerships with Iran help deter such a return.

Joint U.S.-Russo efforts in Syria have been slow to flourish. Russia’s support of Assad has been a major stumbling block. America doesn’t want to be seen actively supporting the dictator it called upon to step down. Now with Russia working so intimately with Iran, the likelihood of a U.S. partnership dwindles further.

It was only the day before the bombings that Russian officials claimed a deal with Washington over the Syrian civil war was close. Then all of a sudden, the Kremlin was operating out of Iran—all but sinking chances of forming a meaningful coalition with America.

With so many regional enemies now intimately involved in Syria under the guise of “defeating the Islamic State,” there is little way America can be more involved without looking like it is supporting Assad, Russia or Iran.

The End of American Prestige

If you were to sum up one of Russia’s main foreign-policy strategies in just a few words, it would be: attack America’s prestige. In a way, it is astonishing that Russia is winning in this. California alone has a bigger economy than the whole of Russia. Put California and Texas together and you have an economy twice the size of Russia’s. If you just look at the numbers, Russia should not be able to dent U.S. prestige.But it can, and it is. And in diminishing America’s prestige and reputation, it is in reality decreasing America’s power.

Palmer’s article was penned in response to Russia bombing U.S. allies in Syria despite the presence of U.S. fighter jets. America had two aircraft carriers in the Mediterranean at the time but was unable to prevent Russia’s attacks.

Time and again, Russia has outmaneuvered America in and around Syria. The historic agreement between Iran and Russia shows that this outfoxing is spreading across the broader Middle East.

How long will it be before the Russo-Iranian axis squeezes America out entirely? Russian weapons are defeating U.S. allies in Syria. Iranian militias are doing a great deal of the fighting in Iraq. Hezbollah still controls southern Lebanon. Tehran is empowered by the disastrous P5+1 nuclear deal and is also armed with Russian weaponry. Now we see Russian bombers stationed in Iran.

On top of this, China—another enemy of the West—has recently become involved in Syria, seeking closer military ties with the Assad regime!

What is happening to American influence in the region? It is shattered.

In Leviticus 26:19, God warns America that disobedience has one outcome: “I will break the pride of your power.” America, the most powerful nation on Earth, is currently being broken in the Middle East.

God also promises that America’s “strength shall be spent in vain.” Isn’t U.S. prestige in the Middle East the very epitome of that statement? Wars in Afghanistan and Iraq showed the incredible power of the U.S. military. But what has it achieved? Enemies of the West now exert their influence over these regions and vie for control of lands where coalition forces once spent trillions of dollars and decades of fighting. Hundreds of lives were sacrificed along the way.

There is coming a time when “[t]hey have blown the trumpet, even to make all ready; but none goeth to the battle: for my wrath is upon all the multitude thereof” (Ezekiel 7:14).

America won’t go to war. It will be defunct, defeated. A terrible end to a once great nation.

Can It Be Avoided?

But must we experience these terrible times ourselves? Are you and I destined to suffer through the traumatic days prophesied in Ezekiel, Daniel and elsewhere in your Bible?

The hope-filled and inspiring answer is a resounding “No!”

Remember, God is bringing these terrible times on the world to wake up mankind! Man refuses to listen to his Creator. Nations that once founded their constitutions on God’s law now scoff at His warnings. It is little wonder God must forcibly awaken our nations, even if it means empowering others like Russia and Iran.

But you are reading this article. You are listening today. God does offer safety from these calamities ahead. He promises safety that no Russian or American power can provide. But it takes effort on our part; it takes action.

Be sure to go back through our website. Look through our free literature, articles, television and radio programs. Nowhere else can you find such a library of hope, education and training. The understanding we need to help avoid the dark days ahead is right at our fingertips. We just need to heed it.