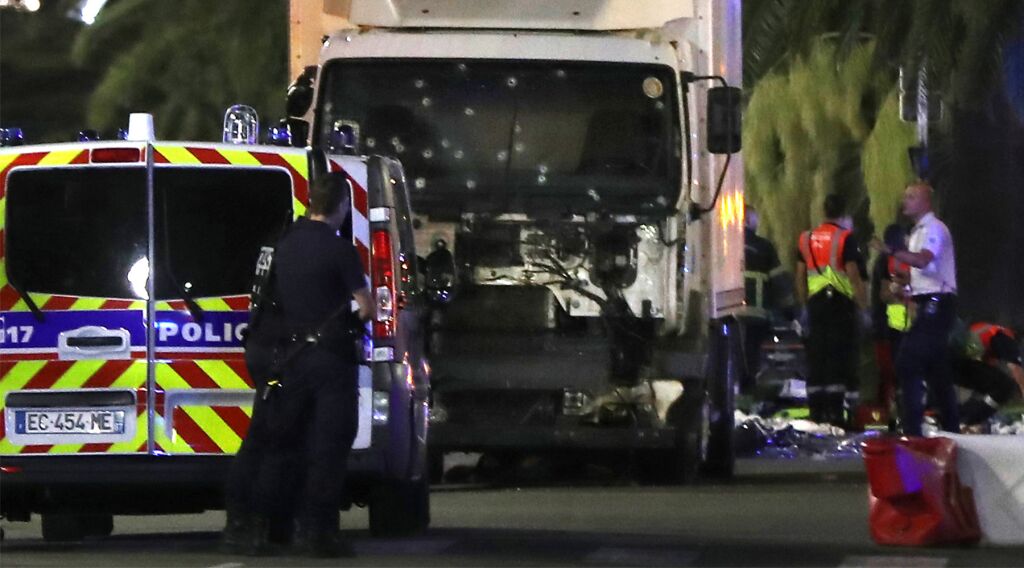 France must move to a real war footing if it wants to stop these attacks.

It should have been an idyllic evening: families celebrating France’s national day with fireworks on the beach in the beautiful French Riviera. Instead a terrorist in a truck drove along the coast for over a mile, mowing down as many people as he could.

At least 84 are dead—10 of them young children. Many more are wounded, including around 50 children and adolescents. Witnesses of Thursday night’s attack describe people being knocked down “like bowling pins” before the driver was killed in a firefight with police.

Now France is struggling to deal with its third major terrorist attack in 18 months. The nation has been on high alert since November. Around 10,000 soldiers have been patrolling the streets. A state of emergency had been declared, giving police extraordinary powers—such as the ability to search homes without a warrant.

None of that helped.

The attack took authorities by surprise. Earlier yesterday, French President François Hollande announced that the nation would soon lift the state of emergency. Now it will be extended for at least another three months.

What more can France do? How do you stop a man from killing people with a truck? Have police patrol every truck or every crowd?

France has just about exhausted its non-radical options.

Hollande announced that the nation would call up its “operational reserves”—all those who once served in the military or as active duty police. But an extra few thousand police would not have prevented this attack. The terrorist was not on any watch list and therefore not under suspicion.

“Times have changed and we should learn to live with terrorism,” said French Prime Minister Manuel Valls.

But France cannot simply just put up with this. No nation will just accept that families and young children will be mowed down every few months.

“We are facing a war that terrorism has started against us,” said Valls.

Many other leaders have made similar statements. “We are at war with terrorists who want to strike us at any cost and who are extremely violent,” said Interior Minister Bernard Cazeneuve.

Hollande said the same thing back in November. But the nation has not really been on a war footing—not in a way that affects the everyday lives of ordinary people.

France has now reached the end of that road. Its options are now clear: accept continued attacks, or move on to a real war footing.

But even this will probably not be enough. Yesterday Geopolitical Futures warned:

Multiple attacks like the Nice attack can terrify a population over time. It is not an irrational fear. The whole point of terrorism is to take the population to the point where fear is the only rational response. When that happens, there are political consequences. First, governments that have spoken of prior tragedies but have not prevented further attacks become delegitimized. Second, there is no moderate response that could work—only extreme ones like mass deportations or worse. Given enough terror, unthinkable results can be generated.This is precisely what [the Islamic State] wants to achieve. It wants a response so overwhelming it will unite Muslims everywhere. The strength of [the Islamic State’s] strategy is that it leaves the defenders an impossible decision. No moderate defense is possible.

This is the kind of fear the Islamic State wants to generate. “The brutal fact is that [the Islamic State] has not hit the tripwire on extreme fear yet, which means the likelihood of more frequent attacks is high,” the article concluded.

France cannot simply “live with terrorism” unchanged—no nation can do that.

France will outline its response over the next few days. Already there is considerable pressure for more action. It’s likely that the response will not be tough enough, and more attacks will follow.

Armed guards and security scanners will not be enough. It would not have stopped this attack—it has not stopped terrorist attacks in Israel. There the nation had to physically wall off the majority of Muslims in the region and set up secure checkpoints before there was a substantial reduction in attacks. These are the only kinds of action that can end this.

Even now, that is anathema to modern Europe. But this is the direction it will be forced in. A couple of hours’ drive from Nice, the city of Marseilles is one-third Muslim. The same is true for many big cities in Europe. Walling off these populations would not be easy, and it would prove much harsher to local Muslims than Israel’s West Bank barrier.

But ultimately this is the choice France faces—accept attacks or take radical action against all Muslims, even the vast majority who are completely innocent. As this attack shows, the France authorities have no way to target just the ones who will kill.

This is a radical change away from the modern, pluralistic, multicultural Europe that we see today. The rise of the far right and the political turmoil show that Europe is already moving in this direction.

These terrorist attacks are changing Europe. Austria came within a hair’s breadth of electing a president from a political party once considered beyond the pale. Progress toward a European military is moving faster than ever before. But the attack in Nice shows Europe must go much further if it is going to stop these terrorist attacks.