The time ahead will be tumultuous—but here is why Europe will emerge stronger than ever. 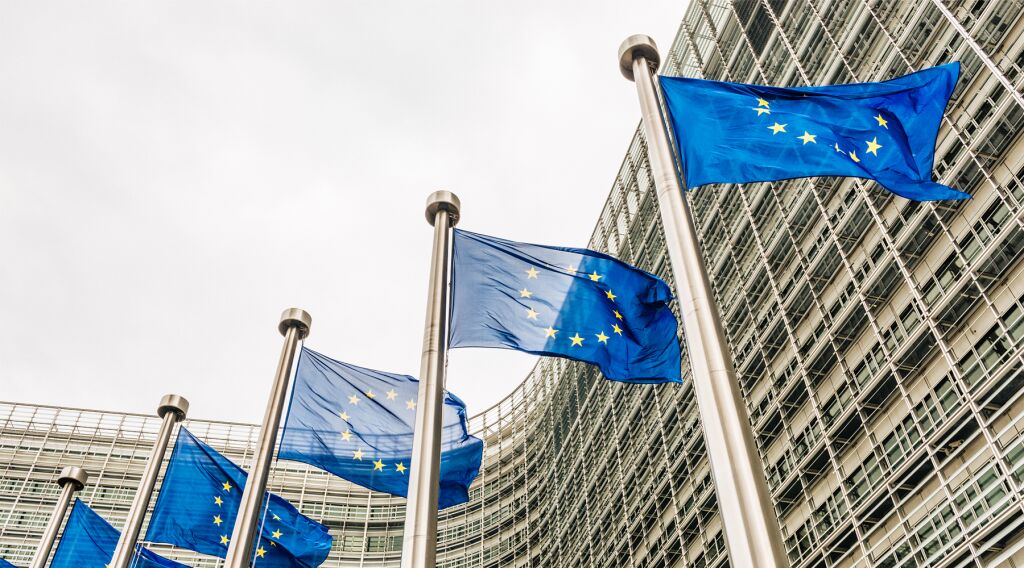 The time ahead will be tumultuous—but here is why Europe will emerge stronger than ever.

When German Finance Minister Wolfgang Schäuble was asked in March what Germany would do in the event of a Brexit, he said, “We would cry.”

In the wake of Britain’s vote, there is a real sense of crisis in Europe.

If the vote happened in isolation, it would probably have been a bit of an anticlimax. Britain wakes up to Brexit on June 24, but then doesn’t actually leave the European Union until 2018 or 2019. The sense of radical change on June 24 would quickly dissipate, as nothing much happened in the weeks and months immediately after.

But Brexit didn’t happen in isolation. Europe is reeling from the euro crisis, the migrant crisis and renewed terrorist attacks. Euroskeptic parties are rising to unprecedented heights in France, the Netherlands, Spain, Greece, Portugal, Denmark, Finland, Sweden and even Germany. In that environment, the EU just received what some believe is a knockout blow in the form of Brexit.

Europe’s crises just got much worse. But as one of Europe’s founding fathers, Jean Monnet, put it, “Europe will be forged in crises, and will be the sum of the solutions adopted for those crises.” The European Council president put it slightly differently in the immediate aftermath of the vote: “What doesn’t kill you, makes you stronger.”

The Brexit crisis could be transformational for Europe.

Anti-EU parties are making waves far beyond Britain. In Austria, a fringe-right Euroskeptic party came close to winning the presidency. In Italy, the antiestablishment Five Star Movement won mayoral positions in Rome and Turin. In Rome, the party tripled its support from just three years ago.

Brexit is a wake-up call to Europe’s leaders. They need to transform the union from the ponderous unpopular bureaucratic machine, or they’ll be faced with Spexit, Frexit and Departugal.

Some in Europe are preparing for others to leave. Schäuble has called for Europe to change course to a core Europe. Former Vice President of the EU Commission Viviane Reding said, “We need a ‘core Europe,’ this must be imposed quickly” (June 19).

Europe’s six founding members held a crisis meeting the day after the Brexit result was announced. In that response and its need for a quick decision, we can already see the direction the EU is heading: a smaller, leaner, quicker union with more punch.

Part of the reason for the EU’s unpopularity is that it is stuck halfway toward a superstate. It is powerful enough to cause problems but not powerful enough to solve them. Europe’s open borders spread the migrant crisis across the Continent, for example, but the EU lacks any common border control.

The euro crisis and the migrant crisis have increased the pressure on Europe to act. In response, it has taken some major steps toward a fiscal union. It has also sped up plans for a European border guard, aiming to have it operational by the end of summer—instead of around 2030 as previously planned. These are major changes, but they don’t solve the lumbering bureaucracy at the heart of the European project that makes every response to a crisis tortuous.

Now the pressure is on to act.

One area where Europe could move the quickest is defense. France has been pushing for unity on this issue since the November 2015 terrorist attacks. Germany is also keen for greater pan-European defense, but talk on this was delayed until after the Brexit vote. The turmoil in the wake of Brexit may delay it a little further, but Europe will not put off the discussion much longer.

Ahead of the Brexit vote, Agence France-Presse wrote that there is disagreement within Germany and Europe on how to react to a British exit. “Consequently, several sources believe that the EU partners would turn their attention to issues where there is greater consensus, such as security and defense,” it wrote (June 21).

“We are going to talk a lot about European defense in the coming months,” afp reported a French government source saying. It wrote that “heavyweights France and Germany—both founding members of the bloc—will find themselves under pressure to defend what’s left of their vision for Europe.”

“They may be forced to only pursue issues such as security, as enthusiasm for the bloc has eroded due to a morose economic outlook and as populist rhetoric gains ground,” it continued.

French Economy Minister Emmanuel Macron told Le Monde that “to avoid contagion from Brexit” the EU must launch “a positive project for Europe.” Many see a European defense union being just such a project.

A Chance to Move Forward

Brexit will also remove one of the biggest obstacles to EU integration: Britain. Guy Verhofstadt, leader of the Alliance of Liberals and Democrats for Europe and former prime minister of Belgium, expressed exactly this hope in an interview with the EU Observer on June 3. “The whole discussion and referendum around British membership is an opportunity,” he said. “Why? Because if it is a ‘No,’ we need to start negotiations.”

Summarizing his comments, the EU Observer wrote, “No matter what the result of the British referendum on 23 June, it will lead to changes in the European architecture.”

German EU Commissioner Günther Oettinger also believes the EU will advance after a Brexit. “[M]y expectation would be that the European project would gather new dynamics,” he told Politico. The EU may have to wait until the next series of elections are finished in 2017, but then “I believe we will gather more power and strength,” he said.

The Telegraph reported that anonymous European bureaucrats had made similar statements. They wrote about “senior sources” who are “insisting that the union will emerge stronger than before if its most reluctant member does choose to withdraw ….”

The Telegraph quoted one source as saying, “The EU will have found an identity and will have moved forward, deepening in key areas like monetary union and defense.”

The Rise of a German Europe

Just days ahead of the Brexit vote, Andrew Peek at the New York Daily News expressed his fervent hope that Britain would stay. “Britons would certainly be justified in junking the whole thing when they go to the polls on Thursday,” he wrote. “But it is better for Americans, 3,000 glorious miles away, if they stay. The reason is Germany.

“The basic problem of Germany hasn’t changed in nearly a century-and-a-half since its unification in 1870. With the highest population and largest economy on the Continent, Germany naturally dominates Europe” (June 20).

“It has historically tacked between Russia and the West, playing one off against the other, creating turmoil and insecurity among its smaller neighbors,” Peek warned.

“Taking Britain’s voice out of the EU will make its members countries more likely to follow Germany, wherever it leads,” he wrote.

Brexit puts Germany in a dangerous position. On the one hand, Europe has just lost a major power with some ability to keep Germany in check. Germany’s power and influence in Europe has increased.

But in a sense, Germany also lost an ally. Germany may have a lot of power, in terms of realpolitik, but many EU decisions are made by votes. Britain held a similar economic view of the EU as Germany. With Britain gone, Germany is now more likely to be outvoted and could have economic policies imposed upon it that run against its fundamental interests.

Germany will be forced to consolidate its power within Europe to prevent that happening. George Friedman warned in his book Flashpoints that other European nations would try to get their hands on Germany’s wealth. Brexit could accelerate that. “Germany will have a choice of accepting the punishment or using its vast resources to transform wealth into power,” wrote Friedman.

“Germany will face stark choices, and increasing its strength in all dimensions will become more bearable than the alternatives,” he wrote. “Germany will therefore become a full-fledged power, first flexing its political muscles and in time its military ones as pressures develop.” Germany will be forced to push the EU away from decisions made by votes, and ensure that power is more directly controlled by Germany.

To Trumpet readers, this post-Brexit Europe will sound very familiar. This is exactly what we have been forecasting, based on Bible prophecy, for decades.

In 1948, when the dust was still settling from World War ii, Herbert W Armstrong wrote about the unification of “10 nations in Europe.”

He continued to warn about this as European nations came together in the Coal and Steal Community and the common market.

Bible prophecy is clear that this power will be made up of 10 nations or groups of nations. The EU, minus Britain, has 27. The Trumpet and Plain Truth have said for decades that this number will shrink. Could that happen in the wake of Brexit?

This shrinking of the EU, or the formation of a new 10-nation European body, certainly implies the EU has a tumultuous time ahead of it. Going from 27 nations to 10 may not be easy. During the euro crisis, in 2011 Trumpet editor in chief Gerald Flurry warned that nations would leave the eurozone and maybe the EU. “When that happens, the pundits will say European unification is dead, that the European Union has failed,” he wrote. “Don’t listen to them!”

The Bible also forecasts the arrival of a stronger leader in Europe—something the EU sorely lacks. The union will require a “confidence-inspiring leader,” Mr. Armstrong wrote in the November-December 1954 Plain Truth.

He also wrote that the common market would become a military power. “The nations of Europe have been striving to become reunited,” he wrote in the January 1979 Plain Truth. “They desire a common currency, a single combined military force, a single united government. They have made a start in the Common Market.”

Mr. Armstrong also forecast Germany’s dominance. “This will be the heart and core of the united Europe,” he wrote (Plain Truth, June 1952).

Remarkably, Britain’s vote for an EU exit could dramatically hasten every single one of these trends.