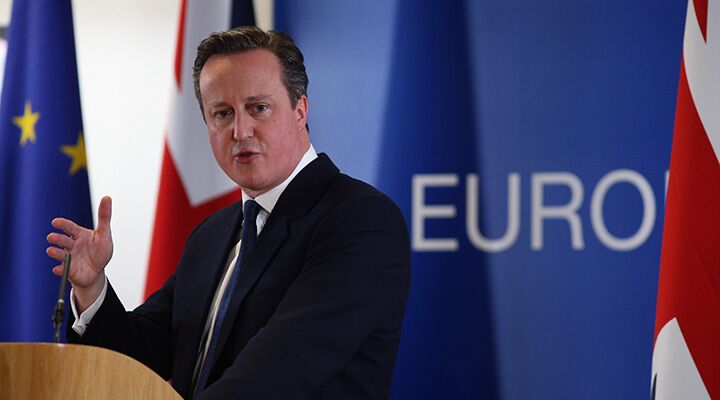 Britain’s departure from Europe is a geopolitically significant event. But did you know Bible prophecy said it would happen?

Millions of people decided whether Britain would remain a member of the European Union on June 23. The British people have made their opinion clear.

Did you know that God had an opinion on this subject as well?

In choosing to leave the European Union, the Brits actually brought about an event Bible prophecy foretold was going to happen!

A Challenge in Scripture

“I am God, and there is none like me, Declaring the end from the beginning, and from ancient times the things that are not yet done, saying, My counsel shall stand.” That is the bold, politically incorrect, unwavering statement made by God in Isaiah 46:9-10. Could it be true? Could God be real? Could Bible prophecy be accurate?

God says He “brings to nothing what the nations plan; but the Eternal’s purpose stands for ever, and what he plans will last from age to age” (Psalm 33:10-11; Moffatt translation).

Bible prophecy explains what God’s plans are and the purpose He is working out. Some 2,500 years ago, biblical writers preserved prophecies describing what would happen in the 21st century. In fact, about one third of the entire Bible contains prophecy, and most of these are for our time now. In these prophecies, the Bible names every important city and nation on Earth and forecasts what will happen to them.

The best minds in the world are examining what will happen now that Britain is leaving Europe. But these great heads of state, business leaders, news analysts and policymakers do not know—and cannot know—the future. Yet the Bible boldly proclaims what the future holds.

To know what will happen next with Britain-EU ties, you need insight from a higher source. And the Bible specifically says that God gives exactly that kind of insight: “Surely the Lord God will do nothing, but he revealeth his secret unto his servants the prophets” (Amos 3:7).

Yet even those who are open to the existence of God, the authority of the Bible and Bible prophecy in general are confused about where this vote will lead—unless they know the specifics.

Even if you believe Bible prophecy is true, to unlock what it prophesies, you still have to know who the prophecies are about. The Bible does not use the names Britain, the United States, Russia or Germany. But it absolutely prophesies about these nations in this time period. To unlock the true significance of the Brexit vote—and what will happen next—you need to know how the Bible identifies these world powers.

So what is the United Kingdom’s biblical identity?

The Bible shows that the British people are descendants of the Israelite tribe of Ephraim. There is abundant proof that the British are modern-day Israelites—a book’s worth of proof, in fact. We would like to offer you a copy of that book—The United States and Britain in Prophecy by Herbert W. Armstrong—free of charge, with no cost, obligation or follow-up.

Following is a brief summary of the truth contained in this book. Ancient Israel divided into two nations after the death of King Solomon. Judah was the southern nation with its capital at Jerusalem—its people are known today as Jews. But the northern 10 tribes were called the house of Israel. It became a completely separate nation from the Jews. In fact, the word Jews first appears in the Bible within a report about Judah fighting Israel (2 Kings 16:5-6).

From 721 to 718 b.c., the nation of Israel was invaded, conquered and removed from its land by the Assyrian Empire (2 Kings 17:18). Its people were deported to the southern shores of the Caspian Sea (verse 6; 1 Chronicles 5:26). Meanwhile, the kingdom of Judah remained in its land for more than a century until it was later conquered and taken captive.

When the Assyrians were conquered by the Chaldean-Babylonian Empire, they migrated north and west to Europe. Ultimately, they became modern Germany. The “Lost 10 Tribes” migrated northwest as well, but they migrated even farther. Some tribes settled in France, Belgium, Holland and the Scandinavian countries where their descendants continue to today.

Ephraim migrated to the British Isles. Manasseh settled in the United States.

Genesis 48 prophesies that Ephraim would become a great company of nations and that Manasseh would become a great nation (verses 18-20). Genesis also specifies that these descendants of Abraham would control the world’s most strategic mountain passes, ports, canals, capes and other choke points (Genesis 22:17-18).

Only two nations in history can fit God’s promises to these two tribes: the British Empire and the United States. These two peoples share a common ancestry. In the 19th and 20th centuries, both came into possession of the majority of the world’s wealth and all of its most important trade routes and sea gates. No other two nations have received these promises so abundantly.

But even if you prove the details of Britain’s biblical identity, how does that inform you about the what lies next in Britain’s relationship with Europe?

What Is Next for Britain

If you understand that the British people are called Ephraim in Bible prophecy, you will discover that the same Bible that prophesied modern Ephraim’s wealth and power also prophesies of its cataclysmic upheaval!

God prophesied that after Ephraim and Manasseh received their promised wealth and power, if they did not turn to the God who blessed them, He would remove those blessings and punish these nations with war and captivity.

Daniel 12:1 prophesies of “a time of trouble, such as never was since there was a nation even to that same time.” Jesus Christ called it a period of “great tribulation,” that would annihilate mankind if He didn’t intervene! (Matthew 24:21-22).

God specifies that the U.S. and Britain will receive the worst of this punishment when He says: “Alas! for that day is great, so that none is like it: it is even the time of Jacob’s trouble; but he shall be saved out of it” (Jeremiah 30:7). The name Jacob refers to Joseph’s two sons, Ephraim and Manasseh, who were given Jacob’s name. The next verse shows that the descendants of Ephraim and Manasseh will go into captivity!

And who does the Bible prophesy will take them into captivity? The very people from whom the British are trying to free themselves politically. Those prophecies are tied directly to what is going on between the United Kingdom and the EU!

God prophesied that the British people would, at some point, partner with Germany! “Ephraim also is like a silly dove without heart: they call to Egypt, they go to Assyria” (Hosea 7:11). Assyria is the biblical name for modern-day Germany (read Germany and the Holy Roman Empire for proof). Britain went to Germany by joining the European Economic Community in 1973, the forerunner to the EU. The British lacked heart or understanding, and joined in hopes of saving their struggling economy. Instead of turning to God, they turned to Germany for help.

Because of that, God prophesied: “I will spread my net upon them; I will bring them down … I will chastise them …. Woe unto them!” (verses 12-13). God brings great trouble on the British people for turning to Germany. He actually causes them to go into captivity by the very people they sought help from.

“Israel is swallowed up: now shall they be among the Gentiles as a vessel wherein is no pleasure. For they are gone up to Assyria …” (Hosea 8:8-9). Multiple scriptures reveal that God will use a German-led united Europe to punish Britain in this end time!

Passages in Isaiah 47 and Revelation 17-18 provide even more detail. These forecasts describe Germany heading a united European empire. That empire, influenced by a great false church, will take Israel captive. (For proof, request Who Or What Is the Prophetic Beast by Herbert W. Armstrong.)

Today, the foundation for that empire has already been laid in the European Union. It is dominated by Germany and influenced by the Catholic Church. The Bible prophesies that soon it will appoint a dictatorial leader who will forge an even closer union.

That is exactly why the British voted to leave the European Union. They know the EU will only continue to rob them of their rights and independence. Decades of regulation and increasingly intrusive policy have already eroded Britain’s sovereignty.

Yet still Britain has not turned to God for help. The “no” vote will not free the British from Europe’s control!

Bible Prophecy Is Sure

All of this comes as no surprise for those who are aware of these prophecies. For 25 years, God’s prophecies have led the Trumpet (and Herbert W. Armstrong for more than 60 years prior), to declare that Britain would not be part of the European Union. The Trumpet has boldly proclaimed it would either be kicked out or leave—and that prophesy was right!

Using Bible prophecy to explain and predict world events is unconventional, but it is a proven method. And the Brexit is not the only time the Trumpet or Herbert W. Armstrong have forecast the future based precisely on the prophecies of the Bible. Request our free booklet He Was Right to see how using Bible prophecy has led to more than 80 years of accurate forecasts.

If the great God fulfilled His plan and purpose by bringing tremendous wealth to the British and American people, then He will also fulfill His plan to bring them into captivity in a Great Tribulation! The British “no” vote will not help the British escape, but if you understand these prophecies and learn God’s purpose, you can escape the disaster approaching Britain. Most will ignore this warning, but you have a choice. Will you believe Bible prophecy?