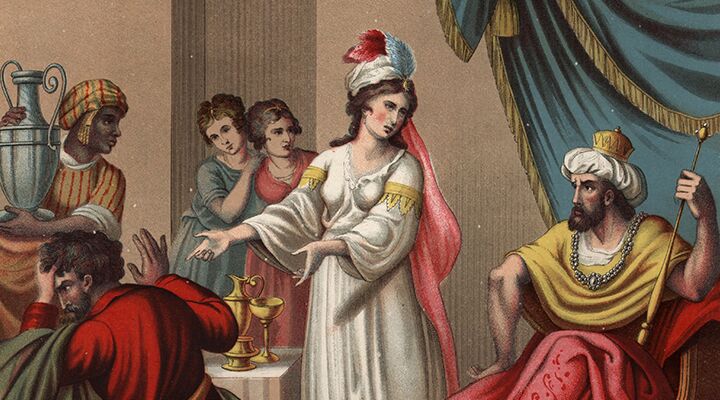 Iran once had a special history with God.

Before 1935, the Islamic Republic of Iran was known as Persia. Persia’s ambassador to Nazi Germany suggested the name change after being influenced by Adolf Hitler’s regime. After 1935, many Persians turned to hatred and anti-Semitism.

Some of the most prominent images in Iran today are military parades showcasing various types of military hardware from scuds to ballistic missiles. Protests are filled with chants of “Death to America.” Its leaders constantly threaten to wipe out the Jewish state of Israel. Additionally, Iran is the world’s leading state sponsor of terrorism—and despite the recent nuclear deal, there is mounting evidence that Iran is actively developing a nuclear weapon.

This past month, Iran held its third annual Holocaust Cartoon contest, in which anyone around the world could submit a cartoon, mocking the Holocaust. This is a perverse demonstration of the Iranian regime’s rampant anti-Semitism. Ever since the Islamic Revolution in 1979, hatred for the Jews has been one of the nation’s most consistent and enduring legacies. The thought of such a government acquiring nuclear weapons is terrifying.

This Islamist culture that now dominates Iran is actually a somewhat recent phenomena. When we look back at the history of the Persian people, we see an inspiring heritage that Iran has lost. The Armageddon doctrine of Iran’s mullahs comes from their Islamic teachings—not from Persian antiquity. The Persian people have a long, proud history that includes producing perhaps the most beneficent empire until the British Empire. Human rights, massive infrastructure investment, an efficient postal system and ancient dignity are among the achievements of the Persians. But the one aspect of Persian history that stands out among them all is their special relationship with the Jewish people.

Long before he was born, Persian King Cyrus was prophesied in the Holy Bible not only to conquer Babylon but to order the rebuilding of the temple in Jerusalem destroyed by Nebuchadnezzar in 585 b.c. When Cyrus the Great conquered Babylon in 539 b.c., all of the details prophesied in the Bible were fulfilled to the precise detail. To study more of this astounding history, please read columnist Brad Macdonald’s article “The Startling Truth About One of History’s Greatest Kings.”

But there was another event that occurred after the reign of Cyrus that is important to understand. When the Persian Empire was at its zenith under King Xerxes, one of the most interesting and dramatic episodes of intrigue took place that almost succeeded in destroying all Jews in the known world.

These events can only be found in the biblical book of Esther.

When Xerxes was planning his invasion of Greece, he banished his wife, Queen Vashti, for not obeying his orders. A seemingly inconsequential event left the king companionless just before he implemented his plans to expand the Persian Empire. Consumed with the expansion, Xerxes did not worry about finding a new queen immediately.

Ten years earlier, the westward expansion of Persia was stymied at the battle of Marathon against the Greeks, which was one of the greatest last stands in military history. In 480 b.c., Xerxes’s army of 500,000 built a bridge over the Dardanelles (a great feat of engineering) and marched toward northern Greece, with its sights set on Athens.

Xerxes now determined to take his army to Athens through the Thermopylae Pass, which was only 50 feet wide at its narrowest point. Approximately 6,000 Spartans held off the Persian army until they were betrayed and surrounded. In the end, 300 Spartan hoplites made a last stand and perished, giving the Athenians enough time to organize their defense. At the brilliant battle of Salamis, the Persian navy was defeated and Xerxes was forced to withdraw.

Back in the palace of Shushan, Xerxes still reigned over the world’s greatest empire, but his defeat led to melancholy and thoughts of a new wife. He ordered his servants to gather all the beautiful virgins in the kingdom for him to choose from. These women would be given one evening with the king to make an impression on him.

Among these young women was Hadassah, known as Esther. She was a Jewess whose parents had died when she was young. Esther was raised by her Uncle Mordecai, who worked in the king’s gate, probably as a bookkeeper.

Jews lived throughout the kingdom since Babylon uprooted them from Judah. Some had returned to Jerusalem during Cyrus’s reign under Governor Zerubbabel, but most were scattered in the Persian Empire.

The process of choosing a wife took months. During this time, Esther gained favor with Xerxes’s servants. Mordecai raised Esther to fear God, and her respectful femininity won Xerxes’s heart. But she had one secret that she never told him. Mordecai commanded her not to reveal she was a Jew. Anti-Semitism was rampant in ancient times, as has been throughout history.

Just after Esther married Xerxes and became queen of Persia, Mordecai discovered a plot against the king. He reported it to Esther, the plot was thwarted, and the two offenders were hanged. Mordecai’s part in saving the king was recorded but remained unknown by Xerxes. Mordecai continued his work in the king’s gate, performing his regular duties until another character entered the drama.

King Xerxes established Haman as his new prime minister, the chief prince of the kingdom. Wherever Haman walked, the king’s servants were to bow in reverence to him. But when Haman walked by the king’s gate, Mordecai refused to bow—he would bow to no man.

To Haman, who disliked the Jews, Mordecai was a rebellious dissident. His refusal to bow before him made Haman furious, so he sought to have Mordecai killed. But it didn’t stop there; his hatred for just one man could not be contained. Haman ambiguously asked Xerxes for the authority to destroy a certain rebellious people who would not keep the king’s laws—a request that was granted. Xerxes did not know that the Jews were the target, and Haman now had the chance to wipe out an entire race.

The decree sent out to the four corners of the kingdom gave permission to any member of the kingdom, on a certain date, to kill any Jew—young or old, male or female. They could take their possessions for a spoil. It was Persian tradition that once a decree was law, it could not be repealed. Thus, Haman had a legalized holocaust.

The entire Jewish race seemed destined to perish. Mordecai started fasting in sackcloth and ashes, which was illegal to do in the presence of the king. When Esther heard of it, she sent Mordecai some clothes, but he refused to take them. It was then that she learned of the fate of her people.

Mordecai told her that it was her duty to ask the king to stop the holocaust. At that point, Esther hadn’t been called on by the king in a month. If she appeared before the king without being summoned, she could be killed. She would only be spared if the king extended his golden scepter.

Esther hesitated to go before Xerxes, but Mordecai told her that perhaps the only reason God had allowed her to become queen was to save her people from this holocaust. She sent back a response to Mordecai, asking that he and all the Jews in Shushan join her in a fast for three days and nights before she approach the king. She ended with the words: “If I perish, I perish.”

At the end of the three days of fasting and beseeching God, Esther went before King Xerxes. When Esther approached the king, he happily greeted her and extended the scepter toward her. She would not die, but she also wanted the same mercy extended to her people. She invited the king and Haman to a private banquet in an effort to gain the king’s favor. The first night of the banquet delighted both men. They both agreed to come back for a second night.

In the next 24 hours, two events occurred that are important to the climax of this history. As Haman returned to his house from the royal banquet, the sight of Mordecai launched him into white hot fury. He ordered the construction of a special gallows to hang Mordecai on the next day. This appeased his wrath, and he slept soundly.

That same night, Xerxes could not sleep. He used his time to read some of his kingdom’s recent history. It was then that he read that Mordecai had uncovered the plot against him and that no reward had been given. The king intended to make up for the oversight.

The next morning when Haman visited the king, Xerxes asked him what reward should be given to the man whom the king delights in. Haman believed the king must be referring to himself, so he described a royal parade of splendor. The king told him to do everything he said, to the minutest details, for Mordecai. Haman could not believe it, but he had to carry out the king’s orders, dressing Mordecai in the king’s apparel and leading him on the king’s horse through the streets of Shushan.

The humiliated and dejected Haman returned home to find that his wife had a dream in which Haman was destroyed by the Jews. The distressed man was then whisked away to the second banquet with Esther and the king.

As the king enjoyed the second night with the queen and Haman, Esther put her plan into action. She told the king that there was a plot to destroy her people from the kingdom. Xerxes’s wrath began to boil, and he demanded to know who was responsible. Esther pointed at Haman, who sat speechless, frozen in fear and bewilderment. Haman begged for his life, but to no avail. Xerxes had him hung on the very gallows he had built for Mordecai.

But the Jews were still not safe, even though their persecutor was dead. The decree giving permission to kill the Jews could not be revoked. So Xerxes issued a new decree, giving the Jews the right to defend themselves if they were attacked. When the day came that the Jews were supposed to be destroyed, over 75,000 anti-Semites died at the hands of the defending Jews. Thus their place in the kingdom was safe, and Xerxes and his Jewish queen ruled over a tranquil kingdom. Mordecai replaced Haman as prime minister, and the destiny of the Jews was preserved.

King Xerxes and the Persian Empire preserved the promises that were to transform the whole world. Years later, Ezra and the temple prophets would come and finish the temple in Jerusalem. King Artaxerxes, son of Xerxes, would send Nehemiah back to rebuild the walls of Jerusalem. From those Jews in the homeland would come the seed of promise, Jesus Christ, through whom all men, Jew and Gentile, may be saved.

This is the precious history the people of Iran have forgotten. They played a pivotal role in fulfilling the plan of the great God. Instead of seeking the genocide of the Jews, the leaders of Persia became the guardians of their lives. If only the people of Iran would remember the great King Xerxes and how he helped the Jews, rather than seeking their destruction. It is tragic that a nation with such a rich history with the Almighty God, and who changed the world forever through helping a people that everyone despised, should descend into the slavery of hatred. Iran once stopped a holocaust, but today, it is planning another.

For more information on the incredible history of Iran, read “The Startling Truth About One of History’s Greatest Kings.”