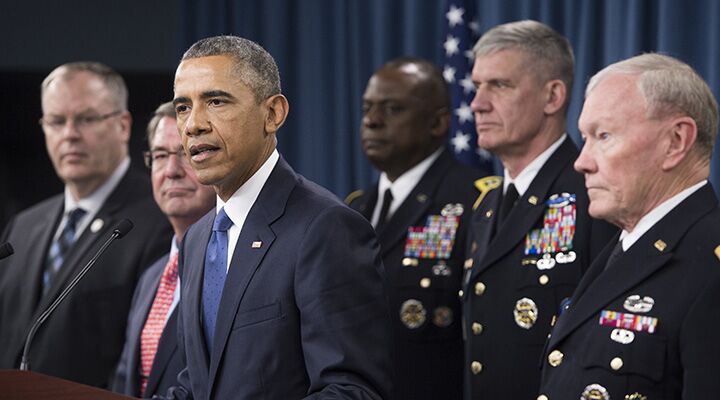 The conflict in Syria is proving to be more challenging than previously estimated.

In 2013, United States Secretary of State John Kerry assured that military intervention in Syria would be limited to an “unbelievably small, limited kind of effort.” That effort will surge six-fold to about 300 ground troops in the next few weeks, according to a statement from President Barack Obama.

Speaking at an industrial fair on April 25 in Hanover, Germany, President Obama announced plans to send additional troops to Syria to help fight the Islamic State. “[G]iven the success [of the initial deployment], I’ve approved the deployment of up to 250 additional U.S. personnel in Syria, including special forces, to keep up this momentum,” he said.

It’s a different kind of military effort than what Secretary Kerry talked about in 2013—in terms of the scope and duration of the campaign, as well as the nature of the enemy. After stating that Syria would not be the next Iraq or Afghanistan, Kerry said:

We’re not going to war. We will not have people at risk in that way. We will be able to hold [Syrian President] Bashar Assad accountable without engaging in troops on the ground or any other prolonged kind of effort; in a very limited, very targeted, very short-term effort that degrades his capacity to deliver chemical weapons without assuming responsibility for Syria’s civil war.

That was when the Obama administration viewed the Syrian president as the primary threat. In fact, the military intervention Kerry discussed constituted the red line the administration drew for Assad.

Today, the tables have turned: The red line has been blurred into obscurity, and the Islamic State is the new tyranny in Syria—precisely as President Assad hoped. The Assad regime calculated that if it ignored radical rebels like the Islamic State and concentrated its attacks on “moderate” rebels—those who were tame enough to receive U.S. support—the radicals would outgrow Assad as the biggest threat to civility.

This latest troop deployment to Syria is the biggest expansion of U.S. ground forces in Syria since the civil war began in 2011, three years after then presidential candidate Barack Obama promised to end America’s wars in the Middle East. In fact, on multiple occasions in the past, the administration has assured Americans that there won’t be U.S. boots on the ground in Syria. (Watch this nbc News montage of 10 video clips in which President Obama vowed to not commit any ground forces in Syria.)

Yet State Department spokesman John Kirby vehemently denied that the Obama administration had ever ruled out having boots on the ground in Syria.

Regardless, the president insisted that the troops will not lead the fight on the ground but will train and assist local forces in fighting the Islamic State. The rebels will gain access to close air support from the U.S.

But will that effort even suffice?

Officials say U.S. deployment will only be a counterterrorism campaign that is not intended to affect the outcome of the civil war. But the rebels want more. Talal Silo, spokesman for the Syria Democratic Forces coalition, told Reuters that “any support [Americans] offer is positive, but we hope there will be greater support.” He added, “So far we have been supplied only with ammunition, and we were hoping to be supplied with military hardware.”

Another coalition of rebel forces, the 34-member, Saudi-backed High Negotiation Committee, said, “Syria will not be free of terrorism until we see the end of the Assad regime’s reign of terror. We need help in freeing our country from Assad as well as from [the Islamic State].”

In Hanover, President Obama urged Europeans to expand intelligence sharing and increase their cooperation in the fight against the Islamic State. “Even as European countries make important contributions against isil [the Islamic State],” he said, “Europe, including nato, can still do more.”

Syria’s past indicates that America’s “unbelievably small” efforts alone will not end the crisis. The addition of 250 personnel to the current 50 or so special ops is insufficient to significantly resolve the crippling and contagious effects of a five-year war. Merely funding and arming select “moderate” rebels has not been enough to end the crisis. And the little that Europe has contributed to U.S.-led efforts in Syria has thus far proven insufficient.

Syria’s future, as indicated in Bible prophecy, shows that Europe—especially given how much its security has been compromised by the Syrian refugee crisis—might heed President Obama’s call to “do more” in the nation. The prophesied outcome is a Syria more drastically aligned with the Continent—along with other Arab nations close to Saudi Arabia. Trumpet editor in chief Gerald Flurry explained this prophesied outcome in his September 2012 article “How the Syrian Crisis Will End.”

(Listen to this Trumpet Daily Radio Show for more on President Obama’s push for a stronger, more unified Europe.)