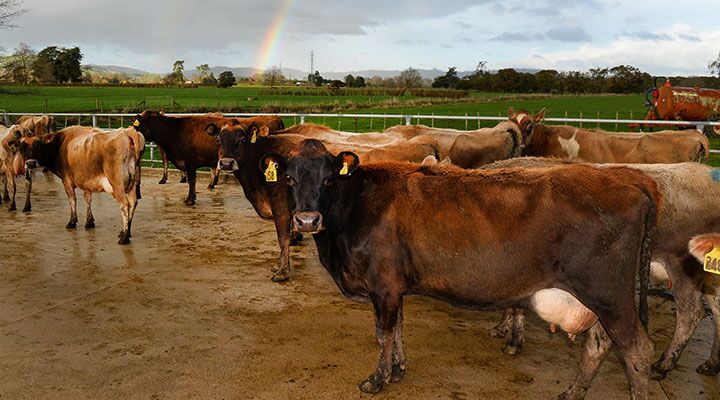 China is successfully manipulating the economies of Australia and New Zealand for its own gain.

Economic war is being waged in the South Pacific. Though it lacks the grizzly kill zones of Iraq or Afghanistan, the quiet rolling slopes of New Zealand and the browned plains of central Australia are pivotal battlefields.

Agriculture and, subsequently, the economies of both Australia and New Zealand are being attacked by China through aggressive and all-too-often underestimated policies. Being the largest trade partner of both countries, China has a crucial role to play in these Western economies. Chinese trends have repeatedly led to devastating consequences for both Australia and New Zealand.

Assault on the Dairy Industry

To most readers, this might seem a tad dramatic. Targeting dairy cows doesn’t sound like warfare. But if the dairy industry makes up 25 percent of your exports—as it does for New Zealand—any threat to the industry is a threat to the nation.

New Zealand, the largest international producer of milk, has come under such an attack.

Since 2014, milk prices have plummeted by 60 percent, leaving many farmers exposed to crippling debt. One survey by Federated Farmers shows that 11.1 percent of New Zealand’s dairy farmers are under mortgage pressure, with 3 percent at extreme risk.

The effects of the swift downturn have hit the farmers and their families hard. Reports indicate that suicide rates for those living in New Zealand’s rural areas are 20-50 percent higher than in urban areas.

For those trying to get away from the farm, there are falling prices to contend with. According to Real Estate Institute, the median sales price per hectare (2.47 acres) for dairy farms in New Zealand fell 19 percent from December 2015 to February 2016. Some farmers are holding out until prices rise; others are strongly encouraged by the banks to sell cheap to avoid bankruptcy.

For those holding out, the costs are high. One agribusiness consultant told RadioNZ, “I would argue that 80 percent of farmers are going to be borrowing to keep going.”

The farmers themselves aren’t the only ones feeling the pressure. Lenders are also feeling the strain. New Zealand banks have lent $27 billion to the country’s farmers. This equates to 10 percent of all lending in the country. The debt is close to $7,000 per cow.

This massive debt affects the entire economy. Forecast growth is bleak, estimated by the central bank to be 2.3 percent in 2016.

How could this collapse happen to an industry that only a few years ago was thriving? The answer lies with New Zealand’s investors.

China has been buying up big. In 2013, China bought a record 622,000 tons of milk from New Zealand. Just last year, a tin of baby formula sold for $50 more in China than in Australasia.

Eager to cash in on China’s desire for milk and baby formula, many nations planned as though the rush would continue. Farmers and governments invested heavily in the dairy industry. Business boomed, particularly the dairy-oriented economy of New Zealand. New Zealand assumed China would buy all it could produce and at a premium price.

Then all of a sudden, the Chinese pulled out.

All along China was manipulating the commodity price. The Chinese weren’t using the baby formula and milk—they were stockpiling it. Beijing pulled the same tactics on Australia’s mining industry in 2013. China created an artificially high demand, built up stockpiles, then pulled out of the market.

For New Zealand, the results have been disastrous. Milk prices were at $5.87 per kilogram (or just over 1 quart) two years ago. Today, they are at $2.73 per kilogram.

Farmers planned for the high prices to continue, not realizing the product was being stockpiled. While hoodwinked by the Chinese, the nation is in many ways the author of its own fate. Banks issued loans to help farmers expand to fulfill China’s needs. But few stopped to consider that China’s need for dairy would be short lived and that farmers should invest based upon a more moderate economic climate. Now farmers face mortgages and loan payments beyond their means to pay.

This plays right into China’s hands. Asia and the Pacific Policy Society states:

It is likely that corporate dairy farming companies’ properties and private dairy farm sales will increase over the next accounting period. If this happens, the Government and Overseas Investment Commission may come under pressure from farm owners and lenders to allow Chinese corporates to purchase New Zealand farms in fire sales, to spare farmers from bankruptcy, and so that banks can recover their funds.

China is playing the long con: It sacrificed higher costs for dairy products in 2015 for a shot at buying out cheap Kiwi farms.

China’s artificial inflation of a market that is so pivotal to the survival of New Zealand’s economy was a thinly veiled attack. The economic effects have been catastrophic. New Zealand’s dairy industry is $28 billion in debt. That equates to 20 percent of its gross domestic product. The average debt per dairy farm in New Zealand is now $2.4 million. Each farm averages less than 400 cows, with 50 percent of those farms facing a second annual loss this year. All of this breeds incentive to sell cheap to China.

Across the Tasman Sea, Australia is faring no better.

Australia is even further down the road than New Zealand.

Tasmanian independent M.P. Andrew Wilkie said, “Selling Van Diemen’s Land to a foreign bulk commodity enterprise will result in milk or milk powder shipped offshore in bulk.” He cited the current shortage of baby formula—nicknamed “white gold” in China—due to Chinese demand. The Chinese don’t just want the product; they want the cow and the land it grazes on. New Zealand is heading in the same direction.

Another big sell in the works is that of the S. Kidman & Co. cattle empire.

Chinese-owned Shanghai Pengxin Company has offered $270 million to buy the Kidman properties. Kidman is Australia’s largest private landowner. The farms it may now sell to China run over 200,000 cattle, spanning three states and territories with an impressive 39,000 square miles. That is roughly the size of Kentucky or Iceland.

Time and again we have seen politicians and lawmakers approve such deals, deeming it to be in Australia’s best interest to encourage international investment. All the while, the nation is sold to foreigners.

The aforementioned examples are just the tip of the iceberg. There are plenty of examples to point to. China bought 50 farms in Victoria in 2014. It also bought Australia’s largest cotton farm in 2013. Over the past five years, a number of large wineries and sugar farms have also fallen to the Chinese.

Many supporters of these deals argue that they promote development and necessary investment the government couldn’t otherwise bring. But there is also the risk of streamlining. China wants to invest more in Australia’s rail and road network, gaining the ability to streamline goods from Chinese farms in Australia to Chinese ports in Australia then on to China itself.

Then there is national security to worry about, unrelated to the economic attack. Chinese investment companies are often hand in glove with China’s Communist Party, and they often have the same goals.

Financial Review refuted this, stating, “This is not about spies or intelligence gathering by our biggest trading partner. It’s about a fundamental reshaping of the global economy and Australia’s relationship with the world’s biggest economy.”

With that said, notice the alarming trend of investments by Chinese companies. There is the century-long lease of the Port of Newcastle—right down the road from the Royal Australian Air Force (raaf) Williamtown base. There is also the Landbridge Group’s acquisition of the Port of Darwin for a century. Darwin is the home of United States and Australian navies, air forces and barracks. Then there is the convenient “sister port” agreement between Qinzhou and the Port of Townsville—close to raaf base Townsville. And don’t forget the China-connected firm buying the land adjacent to the Australia Security Intelligence Organization headquarters in the nation’s capital, Canberra.

Can anyone still believe that the companies Australia and New Zealand trade with so eagerly are not tied to the belligerent Chinese government? Read “China Controls Darwin for a Century” for an in-depth look at just one of these supposedly “private” Chinese enterprises.

In a way, Financial Review is right. This isn’t just about trade. But it has everything to do with trade. New Zealand has sought to keep up with China’s demands, and in doing so, it has exposed itself to crippling debt and the risk of having to sell itself to Chinese investors. As for Australia, it has already happened. Following the 2008 crisis, Australia poured money into the mining sector and gave everything it could to China. Now the market is gone, and economic pressure is leading to Australia selling itself off piece by piece.

Napoleon Bonaparte once said, “China is a sleeping giant. Let her sleep, for when she wakes she will shake the world.” That giant has awoken in Southeast Asia and Australasia. For years, we have done everything possible to feed it and appease it. Now it is coming for our farms, our ports and our industry.

Keep watching the Trumpet, and read our free booklet Russia and China in Prophecy. This giant was prophesied, and it is soon going to help shake the whole world.