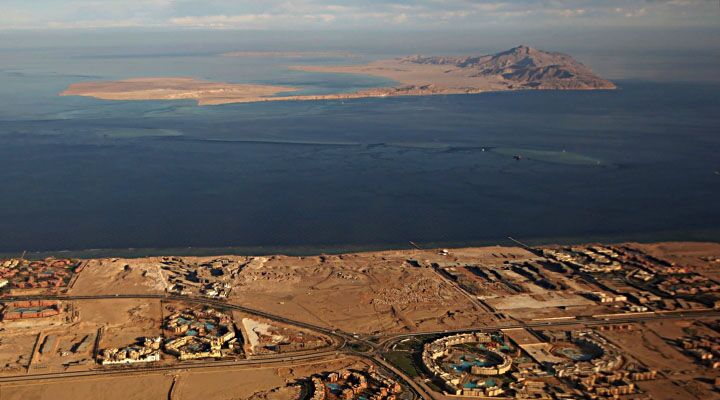 The backlash on social media has some wondering whether another revolution is on the horizon.

JERUSALEM—Egyptian President Abdel Fattah al-Sisi is under fire at home after agreeing to cede control of two Red Sea islands to Saudi Arabia. The announcement, made during Saudi King Salman’s state visit to Egypt over the weekend, concerns two islands of important strategic value.

Located at the southern tip of the Sinai Peninsula, the uninhabited islands of Tiran and Sanafir are important because they could virtually control access to Israel’s Red Sea Port of Eilat from the Indian Ocean.

For this reason, the two islands figure prominently in the Israeli-Egyptian peace agreement signed in 1979, which promises safe passage to Israeli civilian and military ships through the narrow waterways of the Straits of Tiran. The Egyptian blockade of the waterway to Israeli shipping in 1967 was one of the reasons for Israel’s preemptive strike against the Egyptian Air Force at the start of the Six Day War.

Yet, astoundingly, it is not Israel that is upset by the move. Israeli Defense Minister Moshe Ya’alon indicated that there was plenty of coordination with the Israelis before the deal was struck, with Israel giving written permission for the deal to go through under the condition that the Saudis agree to allow freedom of shipping through the straits. “It relates to us, and it does not bother us,” M.K. Tzachi Hanegbi, who heads the Knesset’s foreign affairs and defense committee, told Israel’s Army Radio. “We have an interest in expanding the cooperation in the Sunni axis, which is struggling against the radical axis headed by Iran.”

The Israelis did not voice dissent over the decision; rather, the major criticism has come from the Egyptian public.

As soon as the announcement was made, thousands of detractors took to social media and the streets to lambaste the decision in a public display of outrage against the government reminiscent of the start of the Arab Spring.

“By Sunday evening, 28,000 tweets had been sent with the islands’ names in a hashtag,” the Nationreported on Monday. “Another hashtag referring to a character in an Egyptian film, #AwadSoldHisLand, garnered 128,000 tweets. An Egyptian joked that Sisi had had a sale on Egyptian islands: ‘Buy one, get one free.’ Exiled comedian and regime critic Bassem Youssef tweeted a mock Sisi ad, ‘A billion for an island, 2 for a pyramid, and we’ll throw in some old statues for free.’”

The idea that Egypt was selling off the islands was renounced by both the Saudi and Egyptian governments, saying that the islands were actually claimed by Saudi Arabia all along and that Egypt was simply returning them to Saudi jurisdiction. “History and documents of both countries have not shown any disagreement on the Saudi identity of both islands. But some are trying to fish in troubled waters,” Saudi Foreign Minister Adel al-Jubeir claimed.

While that may be the case, the Egyptian public is not buying a word of it. The Egyptian people smell a rat. And it’s unlikely the stench will go away anytime soon.

As the Nation reported, giving away the islands “has the potential to provoke much more widespread opposition to the regime.” Ever since Sisi removed Muslim Brotherhood leader Mohamed Morsi from power in 2013, Sisi has faced dwindling support from the populace. His strongman tactics to put down internal dissent and civil liberties have disenfranchised many Egyptians.

That the public became so riled about giving away a couple of uninhabited islands that most Egyptians likely have not thought about for decades speaks to the tenuous position in which Sisi now finds his presidency. The public pressure for him to step down, as well as the barrage of international pressure to loosen his grip on power, indicate that another revolution may soon shake the Egyptian political landscape.