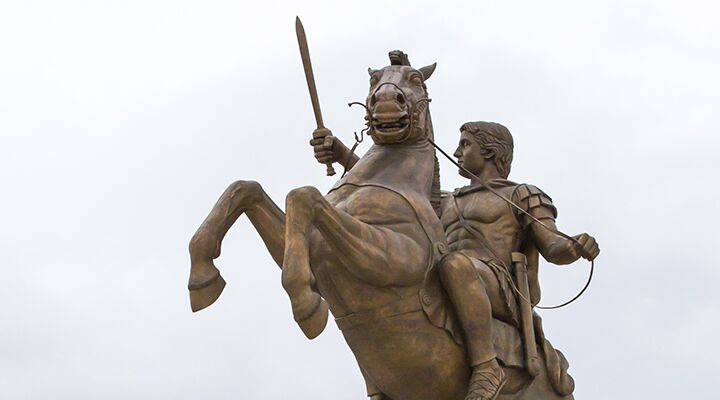 The civilization-altering life of Alexander the Great is well known to most students of history. But there is one chapter of his saga that is as seldom discussed as it is fascinating: Not only was Alexander’s reign predicted in the Old Testament long before he was born, but when Alexander visited Jerusalem, the high priest showed him those Bible prophecies. The priest explained: Alexander, these prophecies are about you!

If you’re not familiar with this intriguing chapter of history, you may be astounded to learn how Alexander reacted to that statement.

(Listen to our podcast about this fascinating story here):

Alexander was born in 356 b.c. in the city of Pella—the ancient capital of Macedonia.

His parents were Philip ii and Olympias of Epirus. From his father, Alexander learned the art and science of warfare. But historians agree that his mother was far more influential in his life. From her, Alexander inherited a profound love for learning, and also his fiery, sometimes ruthless nature.

During his early years, Alexander’s mother constantly told him that he was part god. Her family had long claimed to be descendants of Achilles the demigod, so she told him that this meant some divine blood was pumping through his veins. Of course, that’s all nonsense. Achilles was a myth, and Alexander was a mortal man like any other. But it’s important because of the profound effect these stories had on Alexander.

He believed he was the descendant of Achilles, which prompted Alexander to study all he could about the demigod. In his adult years, Alexander even carried with him a copy of Homer’s Iliad—which chronicles Achilles’s conquests. Every night, he slept with this book under his pillow. He carried it with him into every battle.

When Alexander was young, he was personally taught by Aristotle. Among the subjects Aristotle taught him was the Hebrew language.

In 336, when Alexander was 20 years old, his father was assassinated. Alexander ascended the throne of Macedonia and took command of the massive army his father had spent his life assembling and training.

Almost immediately after ascending the throne, Alexander embarked on the great military crusade that his father had spent years preparing for: the conquest of the Persian Empire.

For several generations before Alexander, the Persian Empire had dominated much of the known world—including some Greek cities. Many in Greece and Macedonia felt that it threatened the very existence of the Greek way of life.

Just before entering into Asia Minor to wage the campaign, Alexander’s mother pulled him aside and told him that his true father was not Philip, but none other than Zeus—the king of the Greek Pantheon. She had always told him that he was the descendant of Achilles, but now she took this delusion a massive step further.

It was the last time Alexander would see his homeland and his mother.

He entered Asia Minor, and the first city he conquered was Baalbek, which he renamed Heliopolis. Then he liberated Ephesus from Persian rule. Then Alexander defeated the Persian army’s main force at the Battle of Issos.

Next, he sacked the cities of Sidon and Aleppo, and then conquered the rest of Syria, and then Egypt.

Things were going well for Alexander. He would have been about 24 years old, and he was undefeated. Every single battle was a victory for him. He felt invincible. He felt that his victories were proof that his mother had always been right. He would have felt like he really was a god.

It was around that time that Alexander set his sights on Jerusalem.

‘Alexander, These Ancient Prophecies Are About You!’

Josephus, the Jewish historian who lived in the first century a.d., said that when Alexander was just about to enter the city of Jerusalem, the Jewish high priest at that time, a man named Jaddua, met him on the outskirts of the city.

Jaddua led a procession of affluent residents of Jerusalem. They hoped that by walking out to meet this mighty warrior, they might keep Jerusalem from being destroyed by his army. The sight of the high priest and the procession gave Alexander pause. He entered the city peacefully.

Once inside, Jaddua brought Alexander to the temple and showed him some passages in the book of Daniel.

God had inspired the Prophet Daniel to write his book back in 535 b.c.—about 180 years before Alexander was born. We know that because of Daniel 10:1, in which Daniel says he wrote in the third year of the reign of Cyrus the Great. Historians agree that would have been around 535 b.c.

Jaddua would have shown Alexander such passages as Daniel 11:2 and 3, which discuss the Persian Empire pushing against Greece, and eventually being conquered by a mighty Greek king:

Behold, there shall stand up yet three kings in Persia; and the fourth shall be far richer than they all: and by his strength through his riches he shall stir up all against the realm of Grecia. And a mighty king shall stand up, that shall rule with great dominion, and do according to his will.

Jaddua would also likely have shown him companion passages in Daniel 8, which give more details about this “mighty king” of Greece who would defeat the Persian Empire. These passages truly are about Alexander the Great, and they were written around 200 years before his reign began!

You can imagine Alexander the Great standing in the temple next to the high priest. You can imagine him being shown an ancient scroll with the words of Daniel written on it. Thanks to the education he had received from Aristotle, Alexander could read the Hebrew words Daniel had written. He needed no translation.

He had also been told by his mother his whole life that he was no ordinary man, but someone with divine blood coursing through his veins. This passage in Daniel, of course, did not say he was divine in any way. But Jaddua would have told Alexander that the book had the true God’s fingerprints all over it.

We don’t know all the details. We can only speculate about Alexander’s thought process. But it may be that the fact that his mother had always told him he was of divine origin made him more open to believing these ancient, holy Scriptures were about him. Or maybe he was just compelled by the direct language about a “mighty king” from Greece overthrowing the Persian Empire—especially since he had already made so much progress toward that end.

And when the book of Daniel was showed him wherein Daniel declared that one of the Greeks should destroy the empire of the Persians, he supposed that himself was the person intended. And as he was then glad, he dismissed the multitude for the present; but the next day he called them to him, and bid them ask what favors they pleased of him; whereupon the high priest desired that they might enjoy the laws of their forefathers, and might pay no tribute on the seventh year. He granted all they desired. And when they entreared him that he would permit the Jews in Babylon and Media to enjoy their own laws also, he willingly promised to do hereafter what they desired.

Alexander not only believed the prophecies in Daniel were about himself, but because of that belief, he gave great favor to the Jews.

He had pillaged and plundered many other cities, often renaming them and requiring them to adopt much of the Greco-Macedonian culture. But for the city of Jerusalem, it was different. He allowed the Jews to keep their own laws, and he gave them a massive break in paying tribute. He said he would basically give them whatever they asked of him.

Josephus goes on to explain that the Samaritans were so astounded by Alexander’s treatment of the Jews that when Alexander came to their city next, they tried to convince him that they were also Jewish. They wanted to be shown that same favor.

This glimpse back into a seldom-discussed chapter of Alexander’s life shows how prophecy and history intersected in Jerusalem in a dramatic way.

To understand those astounding prophecies God inspired Daniel to record, please request our powerful, free booklet History and Prophecy of the Middle East.