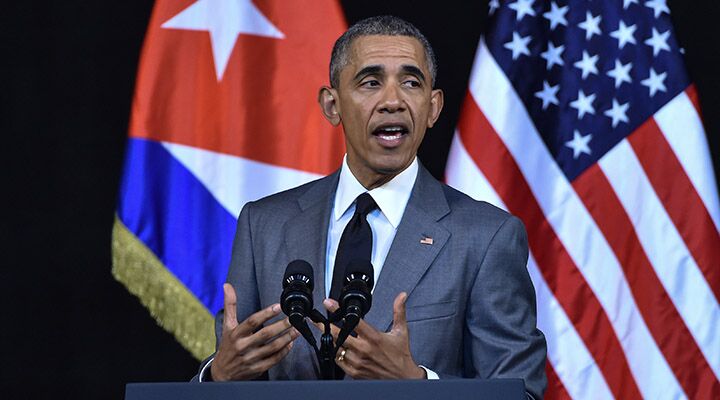 Americans are no longer taught the rationale behind why the Founders limited the power of the federal government.

United States President Barack Obama stoked controversy last Wednesday when he suggested to an audience of Argentine youth that they shouldn’t get caught up in ideological disputes between capitalism and communism. Instead, he urged the next generation of Argentine leaders to pursue a mixed economy that uses bits of Communist theory and bits of capitalist theory.

During his speech at a Young Leaders of the Americas Initiative Town Hall in Buenos Aires, the U.S. president advised:

So often in the past there’s been a sharp division between left and right, between capitalist and Communist or socialist. And especially in the Americas, that’s been a big debate, right? Oh, you know, you’re a capitalist Yankee dog, and oh, you know, you’re some crazy Communist that’s going to take away everybody’s property. And I mean, those are interesting intellectual arguments, but I think for your generation, you should be practical and just choose from what works. You don’t have to worry about whether it neatly fits into socialist theory or capitalist theory—you should just decide what works.

President Obama further elaborated on what he meant by saying that Cuba’s Communist system under dictator Raúl Castro has made “great progress” in providing all citizens with free access to basic education and health care. He said the Cubans “should be congratulated” for this “huge achievement.” He then added that he believed the “most successful economies are rooted in a market-based system,” so an ideal economy should have a private sector subject to community (i.e. government) oversight.

Two days before his speech in Argentina, President Obama held a press conference alongside Raúl Castro in Havana. During the press conference, Mr. Obama promised he would never try to impose American ideals on the Cuban people. Instead, he hoped America and Cuba could learn from each other’s example on human rights:

President Castro, I think, has pointed out that in his view, making sure that everybody is getting a decent education or health care, has basic security in old age, that those things are human rights as well. I personally would not disagree with that, but it doesn’t detract from some of these other concerns. And the goal of the human rights dialogue is not for the United States to dictate to Cuba how they should govern themselves, but to make sure that we are having a frank and candid conversation around this issue, and hopefully that we can learn from each other.

As President Obama nears the end of his second term, he is becoming more honest about his radical worldview. The Framers of America’s constitutional republic, those who created the office of the president, also carefully crafted checks and balances to restrain the power of the presidency and the federal government. For most of his presidency, Mr. Obama has refrained from openly admitting his disdain for constitutionally limited government. However, he has expressed some of these same radical ideas about the federal government during a 2001 radio interview. Speaking about the liberal, activist, 1953–1969 Supreme Court led by Chief Justice Earl Warren, Obama said:

But the Supreme Court never ventured into the issues of redistribution of wealth, and of more basic issues such as political and economic justice in society. To that extent, as radical as I think people try to characterize the Warren court, it wasn’t that radical. It didn’t break free from the essential constraints that were placed by the Founding Fathers in the Constitution, at least as it’s been interpreted, and the Warren court interpreted in the same way, that generally the Constitution is a charter of negative liberties: says what the states can’t do to you; says what the federal government can’t do to you; but doesn’t say what the federal government or state government must do on your behalf.

In other words, if the U.S. state and federal governments obey the Constitution that created them, they cannot guarantee Raúl Castro’s list of human rights like education, health care and retirement pensions for American citizens.

According to one Gallup poll, 38 percent of Americans think the Obama administration needs to do more to solve the country’s problems, as opposed to 55 percent who think the government is too involved in people’s lives already. Many of those in favor of more government intervention may bristle a bit when they hear President Obama speak positively of communism. Yet when it comes to problems in their lives, they still think that the answer is the federal government.

The reason for this state of affairs? America’s public schools no longer teach the rationale the Founding Fathers used to limit the power of the federal government in the first place!

America’s Founders were realists. They understood that human nature was evil, so they sought to devise a system of checks and balances that would keep power out of the hands of a single branch of government, or worse yet, a single individual. Former U.S. President James Madison in the Federalist Papers perhaps best explained this principle:

The world’s socialist and Marxist movements are rooted in utopian thought. Generally speaking, they believe that 99 percent of humanity is basically good, yet they are being restrained by a corrupt upper class. If the 99 percent can overthrow their oppressors, the reasoning goes, then out of their goodness they can establish a government that will abolish poverty, racism, sexism and income inequality. To accomplish this, you do not need to limit government and maximize personal responsibility and freedom. You need to maximize government. You need an administrative state.

When confronted with truth about the astronomically high death tolls of past socialist movements, most utopians respond that the movement failed because a corrupt dictator hijacked the system. But is it possible that they are simply wrong about human nature?

The word utopia actually means “no place.” It comes from a pamphlet by Sir Thomas Moore published in 1516 and was popular reading at the time of America’s Founders. The work was intended to be a satire on views commonly held during the Renaissance that mankind could achieve perfection without God, using only logic and carnal reasoning.

Dictators will always try to hijack governments—that is, until the day all human beings develop righteous character. And because that righteousness comes only from God, humanity is much better off having a constitutional system of checks and balances that prevents the concentration of power in the hands of the state. Such a system may occasionally restrain the state from doing some good things, but it also protects people from the tyrannical excesses of an out-of-control government run by carnal men.

As President Obama suggested in Argentina, he may be in the process of using socialist theory to circumvent and supercede America’s traditional constitutionally limited government and its system of checks and balances and separation of powers. This isn’t necessarily happening because the president has sinister intentions; it is happening because the human heart, cut off from God’s Spirit, is “deceitful above all things, and desperately wicked.” Once the federal government has the power to regulate the educational system, the health-care system and the private sector, the only guarantee of liberty is the off chance of a benevolent leader.