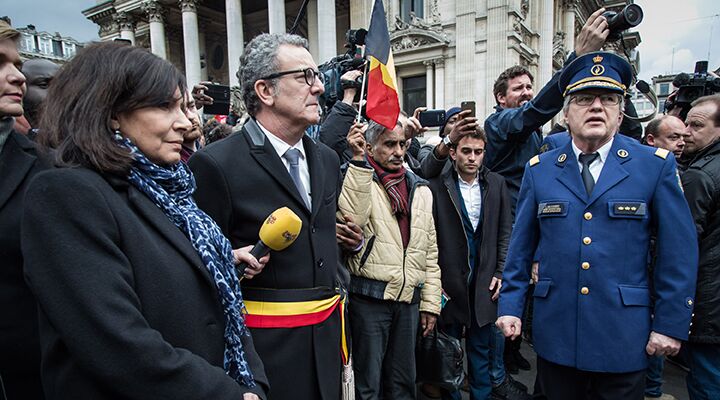 How will Europe respond now that terror attacks are the new normal?

Islamic terrorists detonated three bombs, killing dozens of people in Brussels on Tuesday. The attack follows the arrest of the mastermind behind the French terrorist attacks that killed 130 people on November 13. Now European leaders say Europe is at war. Is Europe finally waking up to the threat posed by radical Islam? What will it do about it?

Authorities say the terrorist attacks began with three men walking into the Belgium airport. Gunshots rang out along with shouts in Arabic before two explosions rocked the facility, killing 11 people and wounding dozens more. First responders later found an unexploded bomb filled with nails among the debris.

Approximately one hour after the twin blasts, another bomb exploded in a Brussels subway station close to the European Union headquarters. The explosion killed at least 20 people on board the metro train. More than 50 others were injured.

Prior to the bombing, Brussels had already been on high alert due the threat of retaliation following the arrest of the Paris attack mastermind. Brussels then went into crisis mode. The army was deployed within the city, people were asked to stay off the phone lines and refrain from texting so as to avoid overloading the communications network.

Many Europeans are still in shock. A lot of people really don’t want to believe that the Europe of today is very different than the Europe of just a few years ago. Brussels used to be one of the safest cities in the world. It had very little crime.

Politically, there have been a lot of statements of unity from various leaders. “We are all Belgians” is the common sentiment.

But events are forcing opinions to change about potential threats from Islam.

It is now clear that Islamic terrorists are embedded within Europe and have an extensive network. Analysts note that for the Paris mastermind to elude authorities for so long and for the extremists to still coordinate such an attack, the web of linkages must go far beyond just close family members.

Germany’s Tagesspiegel reported on evidence that the Islamic State has a cell still on the loose in Germany. Britain’s Telegraph wrote, “The coordinated attacks on Brussels’ airport and metro system shows Islamic State-inspired terrorist networks have become embedded in Europe with the capacity to become operational within days, said antiterrorism experts on Tuesday.”

The consensus appears to be that it took at least 30 people to pull this off, but probably more. There are even reports that these terrorist groups are linking with organized crime.

There’s no denying Europe has a major problem with radical Islam. As Daniel Benjamin points out on Politico, twice as many Muslims have gone to fight for the Islamic State from Belgium alone than have traveled there from the whole of the United States. In the days after the Sept. 11, 2001 terrorist attacks, Islamic terrorists have killed 10 times more people in Europe than they have in the U.S.

“Attacks like those in Brussels today, especially on soft targets like large, unprotected public transportation centers, are likely the new normal for Europe,” Lili Bayer wrote at Geopolitical Futures.

It is clear that Europe’s approach to radical Islam isn’t working, and without radical change, more attacks are on their way.

But even as people wake up to the threat, there also seems to be some effort by leaders to avoid identifying where the terrorist danger is coming from.

“The fight against terrorism is the duty of every one of us,” Polish President Andrzej Duda said.

His comments were typical. There is a mention of terrorism or terrorist attacks. There is talk about hatred and violence. But there is an obvious avoidance of making any link between Islam and terror—even as Islamic State claimed responsibility for the bombing.

That said, the standard political narrative may be changing.

“We are at war,” French Prime Minister Manuel Valls said after a crisis meeting. “We have been subjected for the last few months in Europe to acts of war.”

Europe is being left with little choice but to act. The Brussels attack was a direct assault on the EU.

George Friedman wrote on Geopolitical Futures that the Islamic State “tends to be more strategic than other terrorist groups and has the ability to coordinate attacks.” They chose Belgium for a reason. Why?

“Belgium is not only one of the countries of Europe’s core, as is France, but it is also in some sense the capital of Europe,” he wrote. “Brussels is the headquarters of the European Union’s secretariat. It is also near the headquarters of nato. By striking Brussels, IS [the Islamic State] was striking at Europe’s core. IS has come to see Europe as an enemy, not only because it sees it as Christian, but also because it sees it as hostile.”

In addition to striking at Europe’s headquarters, this attack poses an existential threat to the union. Between the Paris attacks and the migration crisis, Europe’s open border zone suffered a near mortal wound. Borders were “temporarily” suspended, and some have still not been reopened. Can the union survive continued attacks?

“International terrorism arising from Belgium is, in a way, a national security equivalent of the economic crisis that emanated from Greece in past years,” wrote Matthew Yglesias on Vox.com. “They are the result of Europe currently sitting at an unsustainable midpoint in the process of integration.”

Like Greece, Belgium has major problems, and the half-baked nature of the union means it is exporting those problems around the EU while other nations are powerless to effect a cure. The nation is divided between Dutch- and French-speaking halves; this division has added layers of bureaucracy that hampers police forces. Brussels has six separate police departments. It used to have 19.

At the same time, this reality also makes it hard to integrate Muslims. How are you going to make Muslims proud to be Belgian when many native Belgians don’t want their country to exist?

Europe could respond by falling apart and closing borders. “But the other possibility would be to follow in the footsteps of the reaction to the debt crisis, where problems caused by partial integration have tended to lead to even deeper integration, with the European Union and European Central Bank,” continues Yglesias. “In this case, that would entail some centralization of law enforcement powers, through either the creation of a centralized police agency or a formalized process of state-to-state collaboration. Whatever the details, the point would be that if people can hop on a train in Brussels and arrive unimpeded in France or Germany a few hours later, then French and German citizens need equal trust in Belgian law enforcement as they have in their own domestic agencies.”

The Vox article concludes by noting, “But time and again over the decades, Europe has faced decision points where it either needs to go forward to more integration or backward to less, and the ultimate decision has almost always been in favor of more integration in the end.”

At the same time, Europe will have to combine and improve its military.

France’s vice chief of defense, Gen. Gratien Maire, said the threat posed to Europe by terrorists is more dangerous than in the past because of terrorist-sponsoring groups. He said entities like the Islamic State have territory, weaponry and financial resources that provide important advantages to terrorists. Without stopping the Islamic State militarily and cutting off up their funding, there’s no way to stop the threat to Europe, he said.

Some Europeans realize that Islamic terrorism has to be stopped overseas at the source. This means a more assertive military. After France was attacked in November, it invoked Europe’s collective defense clause for the first time ever. Europe is getting ready to take charge of its terrorist problem itself, without U.S. help.

Meanwhile, these continued attacks threaten to bring a monumental change to European society. Europe’s political system has already been knocked out of balance by the migrant crisis and earlier terrorist attacks. On March 8, Spiegel Online even wondered if Germany’s post-war political system could survive the turmoil. The Local wrote “German politics as we know it is crumbling.” The far right is rising across the Continent. How much faster will this rise once people realize that the policies of the current leadership have made terrorist attacks “the new normal”?

Some of the most logical yet disturbing analyses of where this is leading came from George Friedman after the Charlie Hebdo attacks. He drew attention to French Prime Minister Valls calling this a “war on radical Islam.” But it is unlike most wars: “If only they wore uniforms or bore distinctive birthmarks, then fighting only the radical Islamists would not be a problem,” Friedman wrote.

Salah Abdeslam, the mastermind behind the Paris attacks, hid in Brussels for four months. The police couldn’t find him, and they knew what he looked like. So how can they find new radicalized Muslims? As Friedman points out, it’s very hard for Western police to sort the minority of murderous Muslims from the moderates. And so, “the world can either accept periodic attacks, or see the entire Muslim community as a potential threat until proven otherwise. These are terrible choices, but history is filled with them.”

“It is difficult to imagine another outcome save for another round of ghettoization and deportation,” he continued. “This is repulsive to the European sensibility now, but certainly not alien to European history. Unable to distinguish radical Muslims from other Muslims, Europe will increasingly and unintentionally move in this direction.”

Think of what a change this would mean: a change away from the modern, pluralistic, multicultural Europe that we see today. The rise of the far right and the political turmoil shows that Europe is already moving in this direction. Some European leaders are talking about accepting only Christian migrants. It is getting much easier to imagine states beginning to view all their Muslim citizens with suspicion.

This is where these terrorist attacks are pushing Europe. It’s helping to create a unified and more integrated Europe. A Europe that moves away from the evils of multiculturalism toward a darker future where the state discriminates among its citizens. A Europe with a Christian identity—where Muslims are not welcome. A Europe that is fighting Islam abroad.

This is exactly how Bible prophecy says Europe will ultimately deal with its terrorism problem.