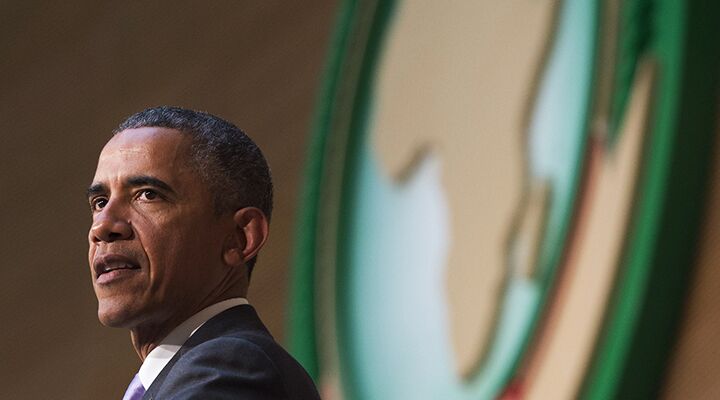 Jeffrey Goldberg’s interview with United States President Barack Obama is still sending shock waves around the world. It may be one of the most revealing interviews exposing what is going through President Obama’s mind as he formulates foreign policy.

Historian Niall Ferguson remarked on the great change since the president took office: “We see with Obama a full-blown revolution in American foreign policy: The foes shall become friends, and the friends foes.” This is clearly evident in the president’s candidness. According to Mr. Obama, British Prime Minister David Cameron is to blame for the failed state of Libya; Saudi Arabia and other Mideast allies are “free riders”; Israeli Prime Minister Benjamin Netanyahu is criticized, while Iran is exalted. There are also parting shots at former U.S. presidents and policymakers. He even criticizes his own staff.

Then we come to Syria.

The president’s greatest achievement, in his opinion, was the choice not to intervene in Syria. The decision not to punish Syrian President Bashar Assad for his violation of President Obama’s redline, the use of chemical weapons, was the highlight of the president’s foreign-policy decisions. As President Obama told Goldberg:

I’m very proud of this moment. The overwhelming weight of conventional wisdom and the machinery of our national-security apparatus had gone fairly far. The perception was that my credibility was at stake, that America’s credibility was at stake. And so for me to press the pause button at that moment, I knew, would cost me politically. And the fact that I was able to pull back from the immediate pressures and think through in my own mind what was in America’s interest … was as tough a decision as I’ve made ….

The president still does not see Syria as a major security threat; he mainly views it as a distraction from the arc of history. Mr. Obama defied his own promise and the conventional foreign-policy wisdom of Western civilization. Today, we live with the ramifications of U.S. nonintervention.

The Syrian civil war death toll stands at 470,000 people. Around 4.8 million refugees have fled the country; over 100,000 had arrived in Europe within the first two months of this year. The political upheavals in Europe from the migrant crisis have threatened to dethrone the Continent’s most powerful leader, German Chancellor Angela Merkel.

Meanwhile, Assad remains in power and his forces are making substantial gains thanks to intervention from allies.

Russia emerged as a powerful force in the Middle East, showing complete operational superiority in Syria and striking arms deals with Iran. The war continues to be a complex, tangled web of alliances and enemies.

The Islamic State persists with its terror attacks and savagery in the region, and now seeks to conquer what’s left of Libya.

This does not even broach the hegemony Iran now enjoys in the Middle East. The Saudi ambassador in Washington told his superiors, “Iran is the new great power of the Middle East, and the U.S. is the old.”

President Obama is nearly at the end of his eight years in office, and a survey of the world state at the moment does not reflect kindly on his legacy. The world order is rapidly shifting, and chaos is becoming more evident. Other world powers are becoming more menacing, even are blatantly violating the sovereignty of other nations. The fruits are plain to see.

What is the Obama doctrine? It is a revolution, a seismic shift in America’s role in the world. It is also the architecture of chaos. The decisions of President Obama have helped to collapse the world order predicated on American power, thus creating an environment of imperial decline. These decisions have undermined classic American interests, weakened friends, strengthened foes, and given the lead to other world powers.

This is not the first time a nation has surrendered world leadership and power, leading to catastrophic consequences.

On March 24, 1938, Winston Churchill gave a speech in the House of Commons warning Britain that its inaction was fostering disaster. Nazi Germany was on the rise, and no one in the West would intervene to stop Adolf Hitler from trampling Europe. Austria had just been conquered by Germany days before, but the leaders of the British Empire seemed content to allow the crisis to blow over. Churchill was not. He said:

For five years, I have talked to the House on these matters—not with very great success. I have watched this famous island descending incontinently, fecklessly, the stairway which leads to a dark gulf. It is a fine, broad stairway at the beginning, but after a bit, the carpet ends. A little farther on, there are only flagstones, and a little farther on still these break beneath your feet. Look back over the last five years. It is true that great mistakes were made in the years immediately after the War. … Look back upon the last five years—since, that is to say, Germany began to rearm in earnest and openly to seek revenge. If we study the history of Rome and Carthage, we can understand what happened and why. It is not difficult to form an intelligent view about the three Punic Wars; but if mortal catastrophe should overtake the British nation and the British Empire, historians a thousand years hence will still be baffled by the mystery of our affairs. They will never understand how it was that a victorious nation, with everything in hand, suffered themselves to be brought low and to cast away all that they had gained by measureless sacrifice and absolute victory—gone with the wind!Now the victors are the vanquished, and those who threw down their arms in the field and sued for an armistice are striding on to world mastery. That is the position—that is the terrible transformation that has taken place bit by bit.

The Obama doctrine has been a terrible transformation where the champions of freedom have allowed world leadership to pass to tyrants and autocratic regimes. The centuries of progress built up by the march of American democracy is gone with the wind!

Churchill warned that Britain was following the path of Carthage and needed to learn from the Punic Wars. America is now following the same road. Carthage allowed Rome to rise in power and did not react with force against its sudden challenges. A series of violent wars broke out, but it was too little too late. Rome conquered Carthage: It cut down the vast forests of North Africa, creating the Sahara desert; it burned the capital city to the ground, leaving it in ashes; and it salted the once-fertile plains, rendering them useless. Rome left Carthage in utter desolation. That is the consequence of inaction.

Carthage, Britain and now America all made the same mistakes and allowed the world order to be turned on its head, leading to chaos, war and eventual defeat. The Obama doctrine is the latest in a long list of mistakes made by mankind throughout history. However, there is more at stake today than ever before. We live in a world with nuclear weapons, and nations are arming themselves with these weapons of Armageddon. As Jeffrey Goldberg’s article makes clear, we live in a different world with a rapidly declining America—and that decline has been brought about, in part, by deliberate choice.