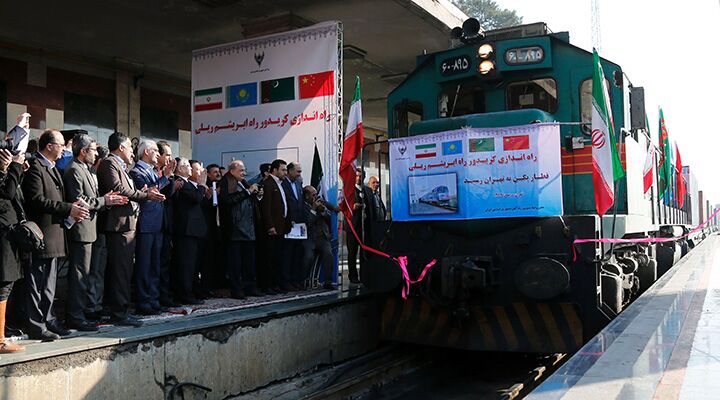 The first train on China’s “Silk Road” railway arrived in Tehran on February 15, making the 5,900-mile journey in a third of the time required by a sea voyage.

The Silk Road refers to an ancient network of trade routes that connected cultures running from Southeast Asia to the Mediterranean—especially the lucrative trade of Chinese silk. In late 2013, Chinese President Xi Jinping unveiled his plan to revive the Silk Road with his One Belt, One Road initiative (obor). Now that transport network has reached Iran.

China’s government says obor “aims to promote the connectivity of Asian, European and African continents,” while “strengthening partnerships” that run through the path of the ancient Silk Road. Others expect even more. “Some people say there are only 65 countries involved, but that’s a misunderstanding,” says Zhao Changhui, chief risk analyst at China Export-Import Bank. “It’s a new method of development for China and the world.”

Iran welcomed the project. Mohsen Pourseyed Aqayi, the head of the Iranian railway company, said the train’s arrival in 14 days was an “unprecedented achievement.”

But the train routes don’t stop in the Middle East. One diesel locomotive already makes the 8,100-mile journey from the east coast of China to Spain. Political leaders in Europe, including British Prime Minister David Cameron and German Chancellor Angela Merkel, have publicly lauded obor and expressed enthusiasm to participate in it. Multiple European countries previously showed their enthusiasm for joint cooperation when they joined the China-sponsored Asian Infrastructure Investment Bank (aiib).

The Diplomat, which covers the Asia-Pacific region, recognized the opportunities that China’s grand initiative could have:

For centuries, the long distance between Europe and China has been a natural obstacle to strengthening bilateral trade relations. As the obor project concentrates on enhancing connectivity and transport infrastructure, there is huge potential to enlarge and accelerate the movements of goods between China and Europe.

Critics of the obor intiative have pointed to slow growth of major projects in Europe. “Europeans are watching at the implementation in Pakistan, which is really the only country where major obor projects are coming up,” said the deputy director of the Asia and China Program, Mathieu Duchatel.

Zhao says the lack of projects so far is simply because the concept is new: “The time is not ripe. It’s not that there aren’t projects, it’s just that they aren’t developed yet.”

China’s largest trading partner is already the European Union, and its economic footprint there is spreading. In January, China was accepted as a small yet symbolic shareholder into the European Bank for Reconstruction and Development.

The Trumpet has followed the growing relationship between China and Europe (especially Germany) and expects their trade alliance to be further strengthened. You can find out the details of that trade relationship in a column by the late Ron Fraser, “The Great Mart.”