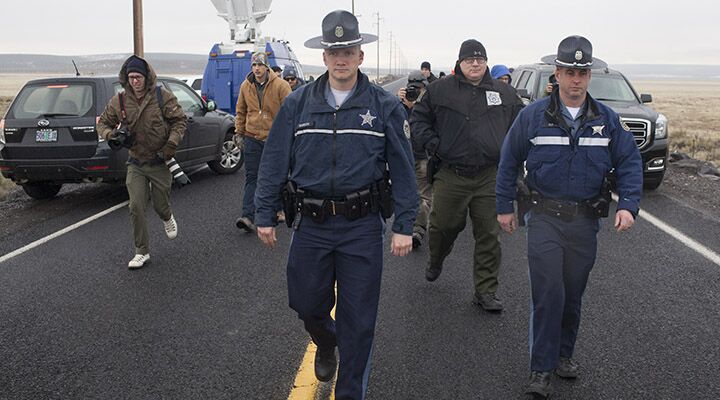 Comparing the Oregon standoff with the Black Lives Matter movement shows how divided America has become on the issue of federal law enforcement.

For over a month, a tense standoff between armed militia members and federal law enforcement officers has been going on at the Malheur National Wildlife Refuge in Oregon. This standoff started as a peaceful rally in support of two ranchers who were charged with terrorism by federal prosecutors and sentenced to five years in prison after fires set on their own property spread to the nearby wildlife refuge. It escalated as a small group of about 20 armed militia members split off from the rally and occupied the wildlife refuge’s headquarters building.

Led by Ammon Bundy, this group of militiamen calls itself the Citizens for Constitutional Freedom. The group originally pledged to occupy the building until federal authorities released the two ranchers from prison and turned over control of the Malheur National Wildlife Refuge to Harney County.

“We will be here as long as it takes,” Bundy told cnnvia the phone inside the refuge’s HQ building. “We have no intentions of using force upon anyone, but if force is used against us, we would defend ourselves.”

The Federal Bureau of Investigation and Oregon State Police surrounded the occupied building, but no one was hurt. It was not until January 26, when Bundy and eight others left the refuge to participate in a local community meeting, that the first fatality in this standoff occurred. When fbi agents tried to pull over the two vehicles being driven out of the wildlife refuge, one of the Oregon protesters, LaVoy Finicum, tried to evade arrest. In the commotion that ensued, Finicum was shot dead and Bundy’s brother Ryan was wounded in the arm.

After the arrests, the protest movement dwindled from about 20 members to just four. While still under arrest in Portland, Ammon Bundy issued a request to these four protesters to stand down and go home. They resisted Ammon’s request, however, and have vowed to stand their ground.

Nevada rancher Cliven Bundy, the father of Ammon and Ryan, sent a letter of defiance on Monday to the local sheriff, Oregon Gov. Kate Brown and the White House. In this letter, the elder Bundy urged the militiamen to remain at the Malheur National Wildlife Refuge until all federal and state policing agents left Harney County.

While the fbi has yet to respond to Cliven Bundy’s latest call to action, the Oregon standoff is casting an enormous spotlight on just how divided America has become on the issue of federal law enforcement.

Some journalists are comparing the Oregon standoff to the Black Lives Matter movement and the Ferguson riots. One editorial from the Washington Post decries a double standard and claims that the police would have killed the Oregon protesters if they had been black, Hispanic or Muslim. Other journalists take the angle that the Oregon militiamen and the Ferguson riots have much in common and should be working together against police abuse.

Both positions fail to note that the Oregon militiamen and the Black Lives Matter protesters are taking extreme opposite positions on whether American law enforcement should be localized or federalized.

The Bundy family and the Oregon militiamen take the position that all federal land ownership and all federal policing operations are unconstitutional. They are calling for the return of the Malheur National Wildlife Refuge to the control of the local populace, and for the expulsion of all federal police from Harney County. In place of these federal officials, Cliven Bundy is asking the Harney County sheriff to place a guard post of local police at the wildlife refuge.

Such calls for the localization of American law enforcement operations are completely at odds with the demands of many in the Black Lives Matter movement. Although Black Lives Matter is a grassroots movement with a plethora of different ideas, the main demand of its activists seems to be greater federal oversight of allegedly racist local police forces. Just after the Baltimore riots over the death of Freddie Gray last year, civil rights activist Al Sharpton called on the United States Department of Justice to step in and “take over policing in this country” so that racist officers can be held accountable. “We’re going to have to fight states’ rights in terms of closing down police cases,” he said.

The framers of America’s Constitution did allow for federal policing of certain crimes, such as counterfeiting, treason and piracy. Outside of such crimes, however, constitutional law mandates that law enforcement be a function of state and local governments. This is the reason there are approximately 18,000 state and local law enforcement agencies in the United States. When law enforcement responsibilities are divided among 18,000 agencies accountable to directly elected local officials, it becomes extremely difficult for any one person to set themselves up as a tyrant. If a county sheriff abuses his or her office, it is much easier for the local community to elect a better sheriff than it is for that community to change the policies of unelected bureaucrats in Washington, D.C.

As law and order break down in American society, the citizens of the U.S. are finding themselves caught in between armed anti-federal militiamen advocating the localization of all police forces and violent ethnic minorities demanding the federalization of all police forces. Keep checking back with theTrumpet.com for further updates on federal overreach, race riots and the militia movement. In the meantime, you can find out more about the dangerous direction America is headed by requesting you own copy of editor in chief Gerald Flurry’s booklet America Under Attack.