One of society’s most successful and brilliant minds says yes. 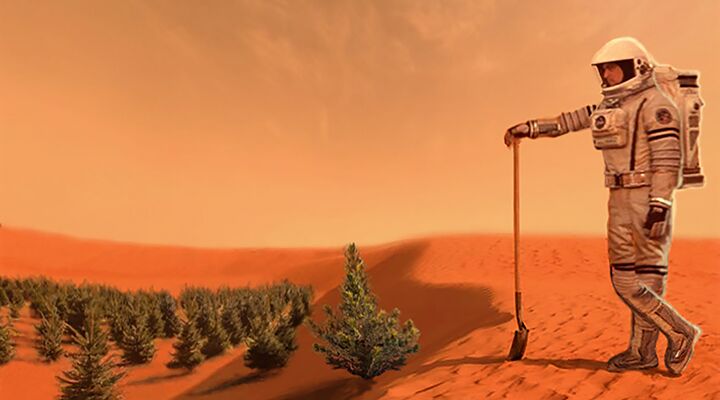 One of society’s most successful and brilliant minds says yes.

Sending people to Mars was science fiction. Now it’s a project in progress. The goal is not just to visit the red planet, but to establish a permanent human colony there.

Jeff Bezos is making big advances with his Blue Origin project. Richard Branson’s Virgin Galactic is making strides, too. And, of course, there is the tech billionaire Elon Musk and his project, SpaceX.

In an interview with GQ published on December 12, Musk said colonizing Mars is not just something mankind should do, but something we must do in order to survive our self-destructive nature.

“I don’t think we can discount the possibility of a third world war,” he said. “In 1912, they were proclaiming a new age of peace and prosperity, saying that it was a golden age, war was over. And then you had World War i followed by World War ii followed by the Cold War. So I think we need to acknowledge that there’s certainly a possibility of a third world war, and if that does occur, it could be far worse than anything that’s happened before.”

In Musk’s view, since mankind has such a violent track record, the idea of becoming a multi-planetary species is basic common sense: “You back up your hard drive … maybe we should back up life, too?”

His goal is to get the human population on Mars to 1 million. That, he says, is the “crucial threshold for us as a civilization to not join the potentially large number of one-planet dead civilizations out there.”

Musk is not the first to say that in order to survive the next world war, humanity needs to colonize beyond Earth. In 2004, late author Ray Browne wrote about the subject: “I suspect that the obsession [with space exploration] is a kind of subterranean fear that things are going to get too hot down here, so now is the time to look for that Shangri-La. And if we just get up there, a few of us, we’ll escape all the trouble that we’re having down here.”

Many like Musk and Browne recognize “all the trouble” mankind experiences here on Earth. They see that it threatens to wipe out all of mankind. But would colonizing another planet allow us to truly escape that trouble?

The Bible has an answer. Scripture shows that God wants and intends for mankind to move out onto Mars and beyond. “For thus saith the Lord that created the heavens; God himself that formed the earth … he created it not in vain, he formed it to be inhabited …” (Isaiah 45:18). This astounding verse, alongside several other Bible passages, reveals that God did not create the vast universe just to be an ornament for people on Earth to look at; He created it to be inhabited!

One of those other passages is Hebrews 2:6-10, which says God will put “the universe” in subjection to mankind (Weymouth version). But then the passage says God has not done so yet.

And there is a very good reason why He hasn’t given mankind jurisdiction over it yet.

There is an old adage often said to individuals who plan to escape their personal problems by moving to a new city: “Wherever you go, there you are.”

It’s true for individuals, and also for mankind as a whole. Relocating doesn’t solve our problems—because we are the problem. We can’t run away from ourselves.

God gave us Earth to care for: a vast, abundant, protected, resourceful, hospitable home—and look around: “All the trouble” here shows that we are not capable of successfully governing ourselves.

Musk is right that mankind is in grave danger of wiping itself out. Matthew 24:21-22 say our most destructive war lies still ahead. And it will be so violent that it would extinguish all human life from Earth barring a literal miracle. But if mankind were able to colonize another planet, we would only bring “all the trouble” with us. If we successfully built a Martian colony like the one Musk envisions, the 1 million people would soon split into factions and devise plenty of reasons to war against each other. It would not take long for Mars to have its own World War i.

The good news is that God has an inspiring plan for changing and healing the human nature that creates so many problems. Once He accomplishes this, then man will be able to fulfill the true potential God has given us. At that future time, mankind will have the chance to inhabit not just Mars, but the whole, vast universe!

To understand the details of this astounding future, order a copy of our free booklet Our Awesome Universe Potential.